While top tech hubs like San Francisco and New York get all the glory, innovation is never confined to just one place, or two places in this instance. Startup founders and entrepreneurs have set up shop all over the country, and their efforts have thrust a few smaller cities into the spotlight of the business world. And, according to the US Chamber of Commerce, these smaller cities are making some serious moves.

The report, titled 2017 Innovation That Matters, ranked US cities based on the health of their startup ecosystems and their ability to capitalize on the increasingly digital economy. By taking into account factors like culture, capital, connectivity, density, talent, and industry specialization, the report found that the top tech hubs weren't necessarily the most innovative cities.

“The study focuses on each city’s level of support for next-wave startups in the health, education, energy, and smart-cities sectors,” wrote the authors of the study.

As for the actual list, the cities included are far from small town names. However, a few bigger names fell a lot further down the list than you'd think. While the Bay Area locked down the second place, behind an always improving Boston, New York can be found near the bottom of the top 10, which is actually an improvement from last year.

The thing to remember when it comes to analyzing this study is that it's focused on the future. While cities like New York and Chicago (#14) are regularly in the discussion for healthiest startup ecosystem, they are far from set up for the next wave of startups coming into the business world. Whether it's a lack of funding or an oversaturated market, these cities are less prepared for the future than Boston, Philadelphia, or San Diego.

If you want to learn more about the future of the US startup ecosystem, take a look at the full report here and check out the rest of the top 10 below: 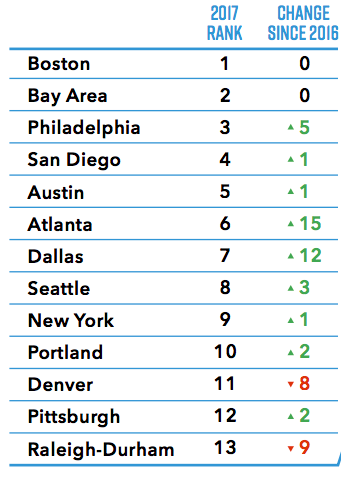 Read more about innovative startup ecosystems around the world at TechCo