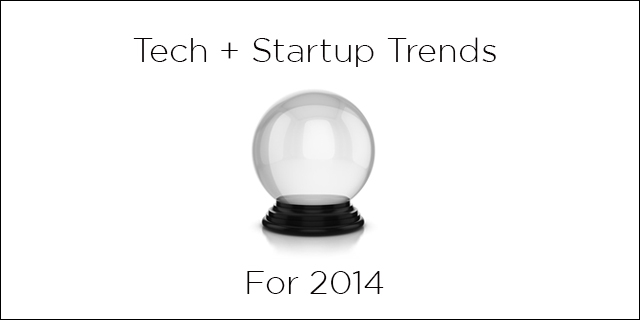 In the world of natural selection, it's not the biggest, the strongest, the fastest, or even the smartest that wins.  It's those who can best adapt to their environment.  The same can be said for business.  Blockbuster clung to an old model, giving way to Netflix's domination.  The newspaper, book store, and music worlds have been flipped on their head, rendering a new wave of industry leaders.

Change brings about winners and losers.  Winning not only requires an understanding of the current landscape, but what it will look like in the weeks, months, and years to come.  To help you win, I reached out to a group of entrepreneurs and thought leaders to share their best predictions for the tech and startup worlds in 2014.  Their insights are below.

Phones and glasses are just the beginning.  Are you ready for smart pants?  Or smart refrigerators that reorder product for you?

The Evolution of Startup Funding

I think we will see in 2014 the intersection between fundraising with the tools of the internet like crowdfunding and the traditional players in the capital raising process like investment banks. Traditional firms that played a role in the capital raising process will find their own ways to provide new investing opportunities to their wealthy clients. For better or worse, they will want to provide venture like tech investment opportunities to their wealthy clients for asset diversification.

Genetic biotech is the research area advancing most quickly today. Labs are combining stem cells with 3D printing to create working heart valves. At will, they're switching off the genes responsible for diseases like Huntington's. Huge potential.

2014 will bring an up year for sites and apps that help make sense of what has become a very noisy web – from ecommerce to content – and a down year for subscription based businesses.

I predict the movement away from a quick sale and instead towards building meaningful long term ventures. The Facebook IPO did not go too well, Twitter had hiccups while Snapchat won't sell, even for $3 billion. The true reason for starting a company has never been speed to sale, and together with societal moves towards meaningful jobs, food and overall lives, this seems like a logical progression.

It's no secret that enterprises have begun to adopt tablets with the same enthusiasm as consumers. As the gap in performance between PCs and tablets narrows and form factor options proliferate, the distinction between tablets and PCs will become less important, and it will be more about the apps.

What I'm seeing among entrepreneurs in my market (Denver) is that there's lots of investment money still sitting on the sidelines and lots of entrepreneurs not willing to wait for the money. Unless you are in a heavily capitalized tech market (like San Fran/Silicon Valley), there's simply not much VC money in many parts of the U.S. And even when there is, many startup entrepreneurs aren't willing to to give up a massive chunk of equity – and thus control – in their company; in many cases, the trade-off isn't there yet. So we should expect to see lots of startups continue to bootstrap through 2014 and either fund from within, engage in sweat equity arrangements or go the friends-and-family funding route.

Lots of brands are trying to capitalize on the trend of the younger generation showing a preference for private and closed social networks for sharing content. Apps like Snapchat and Kik are becoming extremely popular with a younger demographic and now we're seeing major social networks like Twitter and Instagram starting to offer more private sharing features – as illustrated by Instagram's direct message feature, unveiled just last week. I think 2014 will result in more platforms looking to advance their offerings, and more brand new platforms, as users seek to have richer conversations with fewer numbers of people.

Most startups will be born out of the influx of co-workspaces and I foresee that this constant stimulus will turn into the birth of more serial entrepreneurs. Entrepreneurs will have multiple startups simultaneously – ‘Tandem Startups' could be a new term for 2014.

Whatever method takes off – whether it be low energy Bluetooth or near field communication or some other method we're likely to see business mastering new ways to facilitate capturing guest dollars.

With the new crowdfunding rule as part of the Jobs Act, startups who are not yet familiar must research and prepare to leverage this tremendous funding opportunity.

As the economy heats up, startups that help us maintain what little privacy we even still believe we have will be hot. Especially in the hiring space.  We'll need companies like Follr to maintain our digital identity and help craft the story we want to share.

With the introduction of the short video sharing platform, Vine, long videos are quickly becoming obsolete. Startups should plan to share digital shorts that are fun and engaging for users.

M2M: Machine-to-machine communications are at the heart of the Internet of Things and wearable tech. We're rocketing toward a world of smart objects aware of their neighboring objects, and able to react.

Bitcoin and digital payments aren't going away. Bitcoin will meet sales tax requirements in 2014. As things stand today, the sales tax laws loosely say bitcoin transactions are subject to sales taxes. As bitcoin popularity grows, states will get more explicit that bitcoin transactions follow the same laws as other currency like $USD and the rules will become clearer for compliance.

With Android picking up steam, startups need to plan to format their website and apps for both iOS and Android platforms.

Brands have realized quality is more important than quantity when it comes to content. Startups need to plan on creating quality content for the right channels, instead of striving for off-target opportunities just to get their name out there.