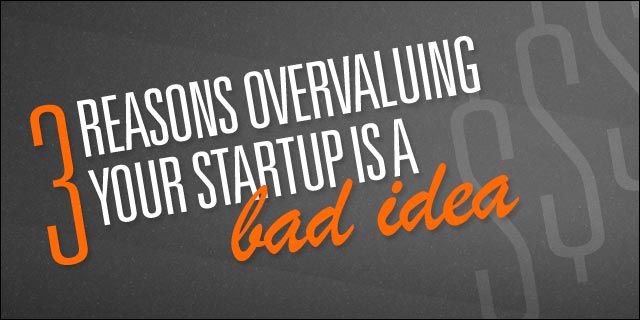 Navigating the startup landscape is fraught with challenges; the most difficult being the funding process. The competitiveness between ventures to secure the money needed to survive in such a crowded space often causes founders to overvalue their startups during the investment seeking process. In reality, they need to be seeking only what they need and ensuring it benefits the part of the business that needs it the most at that time.

There are few overnight successes and entrepreneurs need to use the tools available to them to determine just how much their venture is actually worth. This provides a reasonable starting point to begin discussing the funding needed during an investor meeting; one that will be received positively by all those involved.  Presenting an overblown value runs several risks that will likely keep a startup from securing the funding it needs including:

Risk #1: Securing funding once, and never again. The whole idea behind the funding process is to secure more investment during each round and the inability to do so often means the difference between the life and death of a company. If a founder can convince an investor to make a significant investment the first time around, it just makes it that much more difficult to do it again the next time. If a venture is unable to continually raise increasingly large rounds of funding, investor are going to know that the initial venture was overvalued and be less inclined to get involved with a company that couldn’t get its own finances in check from the very beginning.

Risk #2: Gaining a reputation for an immature management team. One of the most important elements to gaining investment is the quality of the management and in particular the leader.  A good founder or management team knows the benefits of providing a robust figure when talks about the startups value commence and be open to advice and criticism. Investors take risks for a living and are attuned to the personalities driving a good idea. Great management teams that know how to talk financials can make the success of a mediocre idea a reality, while poor management teams often make the failures of a great idea a reality. Take the time to rigorously evaluate a ventures worth and the management team can avoid appearing inexperienced and unreasonable during the investor meeting.

Risk #3: Securing investment and gaining incompatible investors. The best investors know the right questions to ask – what is the go-to market strategy, where does this idea fit into the current marketplace, how will it grow and sustain itself, etc. Investors that are ready to open their wallets and relieve themselves of a significant chunk of change are only going to do it for a venture that has proved its worthiness of the funding they’re asking for. If what’s being asked for can’t be justified by the answers to the above questions, funding is never going to happen.

That being said, once in a while an investor buys in to the outrageous sum being sought by a startup. However, this usually means that the investor has their own idea on how they’d like to answer those questions and will be looking to exercise significant control over the direction of the company. It is critical founders not compromise their vision of the company for funding, otherwise it’s going to create more problems than it solves down the line.

Seek the right funding, not the most funding

My advice: resist the temptation to seek significantly more investment than needed to during the fundraising process. With such little capital available and so many startups in competition it’s understandable why some startups might believe securing as much of the pie as possible is the right decision. However, keep in mind the companies making billion dollar headlines today are the ones that started small and knew how to make every dollar count. They are the ones like Instagram, which began with just $500K in seed money and used it to build its product, demonstrate its long-term value, and continue gaining capital until it saw the success it’s now known for. With an acquisition by Facebook in 2012 for $1B, it’s clearly a strategy that worked out in their favor. Tumblr is another great example, with just $750K secured in its Series A Round, it went on to be acquired by Yahoo in 2013 for $1.1B.

There are few truly overnight successes and its critical newbie startups learn from those that have gone on to long-term accomplishments. Running a startup into the ground is far easier than running one into a billion dollar acquisition. Having rigorous financial valuations and predictions during those all too important investor meetings is crucial its survival.

Paul Jackson is an entrepreneur, angel investor and aerospace engineer. His engineering expertise and entrepreneurial spirit are driving forces behind his founding of Integrus Capital, and co-founding its flagship offerings, Worthworm and D-Strut LLC.