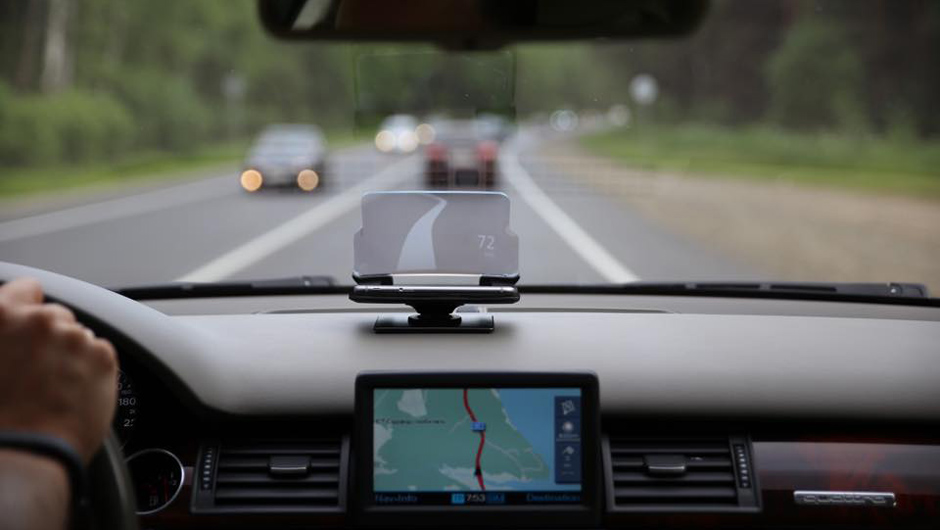 We live in the age when world changes at breakneck speeds – new technologies appear so fast that it is hard to follow all the new developments. Ironically, the sphere of personal transportation, the one most often associated with speeds and progress, so far remained largely untouched by the revolution in digital tech – when compared to what happened to communications in the last couple of decades, car remained pretty much the same. However, we already see the first portents of approaching changes – so let’s take a look at car tech that may become reality in not so distant future.

There is an app for iPhone called HUDWAY that works in the following fashion: you place your iPhone on the dashboard of your car, and it reflects the projection of the road and some additional navigation information like distance to the next turn on the windscreen, theoretically making it very useful in low-visibility conditions. It, however, still has many problems – for example, you won’t see the reflection if the surrounding light is too bright. Windscreen displays will be the next step – they will allow you to keep an eye on the road while instead of glancing on the panel every now and again, and won’t be dependent on outside conditions.

Many car brands have already made some inroads into this area, but Toyota leads the way and probably will be the first to fully develop the concept. Connection between vehicles doesn’t mean the possibility of phoning up the car next to you; it means cars communicating among themselves mostly without the interference from their owners. Ideally, it will help prevent collisions, inform car owners about road congestions.

Sun visors never work as intended, especially in mornings and evenings when sun shines directly in your face. Theoretically, it is possible for a smart glass to block the incoming rays under the directions of computer that has sensors determining the point of sunlight entry and the position of the driver’s eyes: Volkswagen has been working on a similar idea for almost ten years. Perhaps we will see its realization in future.

In time we will probably see fully autonomous cars capable of driving anywhere without human intervention. How long this time is going to be remains to be seen. More realistically, by 2020 there is likely to be enough progress in this area to create cars that will be able to drive autonomously under certain conditions.

Ford has already been working on a technology that would allow seat belts or steering wheels to monitor the vital statistics of the driver, but abandoned it due to rapid development of wearable devices. In the future we are likely to see cars and wearables working in tandem and, for example, pulling the car over and calling paramedics in case a driver has heart attack.

Some of these technologies already exist, albeit in a very limited form. Others are a thing of the future – and probably not so distant one!

I am an entrepreneur since 2012. I have 6 years of experience in marketing and SEO. In my articles I would like to share my business and marketing experience by providing tips and reviews on the newest discoveries in my professional field.