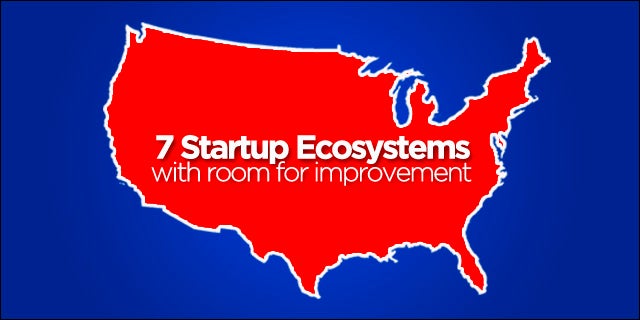 The following answers are provided by the Young Entrepreneur Council (YEC), an invite-only organization comprised of the world's most promising young entrepreneurs. In partnership with Citi, the YEC recently launched #StartupLab, a free virtual mentorship program that helps millions of entrepreneurs start and grow businesses via live video chats, an expert content library and email lessons.

For this edition we asked the crew at YEC to,”Give us 3 reasons why the city you’re located in is NOT ideal for startups YET — and what could be better about it.”  Their responses are below.

A one-hour flight from Silicon Valley, an abundance of coffee shops and four start-up incubators — it seems like Portland, Oregon has all the right ingredients to be the next startup headquarters. But, we are not quite there. Portland, Oregon's robust startup scene is growing at a rapid pace, but one thing slowing down our expansion is the lack of development talent. We do have some awesome programmers, but not nearly enough to build all of the amazing applications that Portlander entrepreneurs are dreaming up. Calling all programmers looking for an awesome new city — we need you!

– Vanessa Van Edwards, Author and Techpreneur at Science of People

2. Cold Chicago: Not Quite There Yet

Startup Genome ranked Chicago as #10 in the list of best cities for startups. However, I don’t think the city has completely embraced the importance of seeding early startups yet. Also, the workforce doesn’t value the opportunity of working at a startup as they do in other cities. And our winters are also pretty harsh compared to the West Coast!

1. Cincinnati is so focused on Fortune 500 companies that they don't give startups much attention. 2. Startups here don't have great places to interact. 3. The investors here don't think outside the box. Anything outside the norm is not accepted. We need better places to network, more creative investors, and more people who innovate.

New York City should be the ideal city for every startup. It's big, it's buzzing, it's 24/7, it's easy access, it's the capital of oh so many industries around the world. However, it has a few main disadvantages: 1. Talent: It's difficult to find engineers in New York City. They just don't exist. In Israel or Silicon Valley, you have many more talented people to choose from. 2. Expensive talent: New York City is an expensive city to live in. And therefore, most people who live in the city make a lot of money. If you do happent to find employees that you'd like to hire, there's so much competition that they are impossibly expensive. 3. No outdoors: Entrepreneurs are pensive people. The great Californian outdoors help you think and get creative.

1. Lack of investors: Austin has some angel investors, and a handful of VC funds, but most companies still end up flying to the Valley to get investment. 2. Brain drain to Silicon Valley: Valley firms recruit here often, and some companies end up moving to the Valley for more exposure. 3. Perception: Austin is perceived as a small city with less to do than larger cities. It's also in Texas, which some people have a negative perception of (although that perception is largely undeserved.) And the weather does get hot in the summer.

Having said all that, I lived for 10 years in the Valley and am building my current (funded) startup in Austin, with no regrets.

Well, the question regards the location being “ideal”! Everyone knows the Bay Area is great for startups, but it could significantly improve. First, more awareness of non-tech startups. The Bay Area is home to so many leading tech companies, that other “old-fashioned” opportunities, like consumer goods, restaurants and healthcare have to fight for recognition. Second, a more affordable workforce in regards to salary and equity. In the Valley, people have seen enough large successes that they assume every startup should lead to riches. Obviously pay is important, but too often a sense of purpose and shared goal is missing. Finally, there is no “roadmap” to startup success here. There are a ton of resources, but these are often competitive. The clutter can distract from a startup's mission.

7. Berkeley: Big Potential on the Bay

Next to a world-class university and just a short drive from Silicon Valley, Berkeley should be an entrepreneurial hub. But it's not…yet. Here's why: 1. Most UC Berkeley students who found companies move to San Francisco or the South Bay. Those areas already have well-established ecosystems. It's a vicious cycle. 2. Berkeley has very few startup events and meetups. And for the events we do have, they are often not well-attended by the folks on the other side of the Bay. 3. Most angel investors and venture capital firms are based in SF or the South Bay. When a company gets serious about funding, it's more efficient to work from either of those locations. You can lose full days driving back and forth.