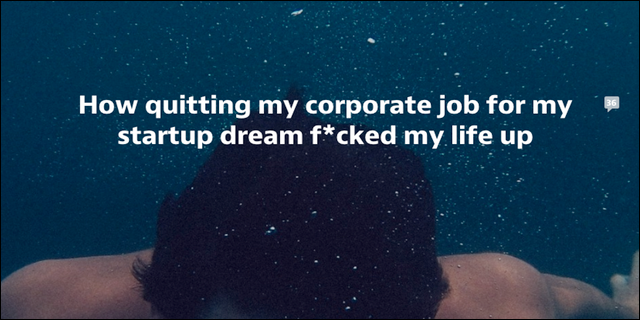 I’ve always thought being a CIA agent or some other top-secret government operative would be a lonely thing. After all, when anyone asks what you do, you have to be evasive or make up some much more boring job. You can’t unload about work or work stress lest you compromise national security.

It turns out entrepreneurs are like CIA agents – but possibly worse. You can talk about how you spend your days, but you might as well be making stuff up – because no one truly understands you.

That was the theme that stuck with me after reading entrepreneur Ali Mese’s Medium post last month called “How quitting my corporate job for my startup dream f*cked my life up.” It racked up over 300,000 views in 12 hours and is littered with comments from entrepreneurs who finally feel like someone gets it.

Mese was a highly paid consultant for Bain & Company when he quit his job to found a startup, PIQERS. And suddenly, a huge disconnect appeared between him and his family, friends, and girlfriend.

Both his family and friends – the ones who still hung out with him, at least – were psyched and expected him to generally start kicking ass immediately. The day after he broke the news to his parents, he got a phone call.

“I didn’t expect the call next morning. It was my mom on the phone: ‘Sooooooooo, how is your business doing?! Is it growing?!’ No matter what I said, I couldn’t explain to her that a business needs more than one day to grow,” wrote Mese.

This pattern repeated itself among his friends, who were a little more startup-savvy and talked about him becoming the next Mark Zuckerberg and raising funding.

“Day by day, I was getting lonelier and more depressive as I avoided social occasions. My startup progress was not as fast as my social circle imagined it to be and I was fed up with telling people it took years for startups like Facebook and Twitter to arrive at where they are now,” Mese wrote.

Even his girlfriend, who was incredibly supportive, didn’t understand him at times – like when he was too distracted for a kiss. This, not just the long hours, is why so many founders end up breaking up with their significant others.

Mese wrote, “Your mind is constantly f*cked up with a million things going on inside and no other person, including your girlfriend, has a single clue what is going on in there.”

From the sound of it, Mese felt more than just misunderstood. Even though everyone’s expectations were unrealistic, he started feeling like he had to live up to them.

“I cared so much about what other people think of me – so much that it ruined my life. I was so hard on myself and punished myself with even more work so I could announce my success as soon as possible. That is, until the day I realized no one gave a f*ck about me, so why would I?” he wrote. “If you care so much about what others think, you will waste your time trying to prove that you are successful instead of focusing on your startup.”

In the end, entrepreneurs might have to accept that other people just won’t get it. It’s like having cancer or having kids – you can explain all you want, but someone who hasn’t gone through it won’t really, truly, deep down be able to understand. But there are thousands of people on this earth who do – which is why it’s so important to reach out to others who are going through the same experience.