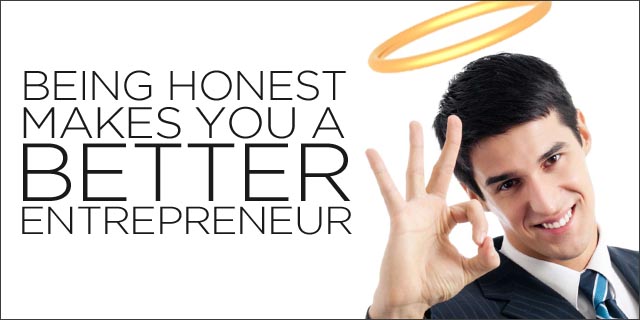 Entrepreneurs are an optimistic breed – some even say delusional. As the argument goes, you need to be optimistic to start a venture with such a high rate of failure. But in the day-to-day life of their business, entrepreneurs have good reason to be just plain honest.

Honesty is built into the lean startup approach championed by Eric Ries that has spread worldwide. By creating and testing hypotheses, entrepreneurs are being honest about whether their beliefs – about what the customer wants, or why they want it – are right or wrong.

“That's what the Lean Startup movement is all about: questioning your assumptions and being really honest with yourself and your team. Not using vanity metrics or building products that people don't really want. You can't lie to yourself or your team or you'll simply go out of business, faster,” says Ana Yoerg, who works with startups on PR and marketing.

The very term “vanity metrics” implies that startups are prone to a specific form of self-delusion: lying to yourself about how well you’re doing. Your user numbers might be going up, but what about active users? You may have 10,000 Twitter followers, but do they engage with your content – and then go back to your website?

A commitment to honesty also means recognizing the red flags when they come up, rather than ignoring them or pretending they don’t exist.

“It is very easy to try to rationalize one thing or another. ‘Traffic was down because of the conference.’ ‘Customers aren't buying because of the holiday season,’” says Jonathan Wasserstrum, cofounder of TheSquareFoot. “While those might in fact be true, the answer could also be that you need to change something about what you are doing.”

This goes for founders on a personal level, too. “Being honest with myself about my weaknesses – even just acknowledging up front that I’m going to make mistakes and screw up, sometimes royally – has helped me get back up and try again,” says Sean Johnson, a partner at Digital Intent. His argument is that if you don’t acknowledge your fallibility, you will struggle even more when you actually fail (because you didn’t expect it).

When JumpSacBaby signed up their first retail partner to sell baby carriers, they were ecstatic. They said yes immediately, without taking a hard look at whether they could actually deliver. In other words, they followed a common piece of advice to entrepreneurs: “Fake it till you make it.”

But when they struggled to fill the orders on time, it damaged their relationship with the partner. “We hadn't been honest with the fact that we're understaffed, and this almost killed the deal,” recalls owner Syazrina Ismail.

Dishonesty, deception, or lies of omission are so dangerous in business because they damage trust. If you lie and get caught, that customer/partner/investor will have a hard time believing anything else you say. But on the flipside, showing that you’re honest can go a long way.

“Honesty is a dying virtue. In a world where people are often doing anything they can to get the deal signed, or move ahead of their competitors, honesty will differentiate you quickly,” says Geek Powered Studios’s Kendra Wright, project management. “Your customers need to know they can trust your word first, before they can trust you with their money.”

There are many ways you can show honesty: admit your mistakes to customers; allow negative comments on your Facebook page; say no when a customer asks for something you can’t deliver. You would think these things might drive people away, but they actually have the opposite effect – entrepreneurs reported getting more referrals, seeing more sales, and having a better reputation when they were honest about their shortcomings. According to lecturer Brent Coker, this is because people can sense genuineness and honesty.

“I'm a firm believer in honesty,” says John Roa of AKTA Web Studio. “People will remember you and recommend you as an organization with integrity and that is something that you can't buy.”

These lessons hold especially true for startups. As founder Jeff Hunt of Snap36 explains, companies like Google or Microsoft can rely on their brand’s reputation to win over customers and partners. But for small, unknown firms – startups that might be run by college students out of a dorm room – trust is critical to the decision to work with you.

And again, this applies even on an individual level. Johnson of Digital Intent stands out at networking events by being honest, admitting that everything isn’t peachy keen with his company. And that makes other people open up and have real conversations, not give the “everything’s great” schpiel over and over. “Candor has resulted in bonding with people at events where surface conversation rules the day,” he wrote in a post on candor.

And finally, lying is hard. It adds one more thing our brain has to remember – the lie, in addition to the truth – and that can be too much for entrepreneurs who have enough on their plates already.

In the end, it can be a relief to give up the perfect facade we like to display as individuals and as businesses. Entrepreneurs should know all too well that everyone struggles. Everyone fails. Everyone makes mistakes. What they don’t always know is that it’s okay to admit it.