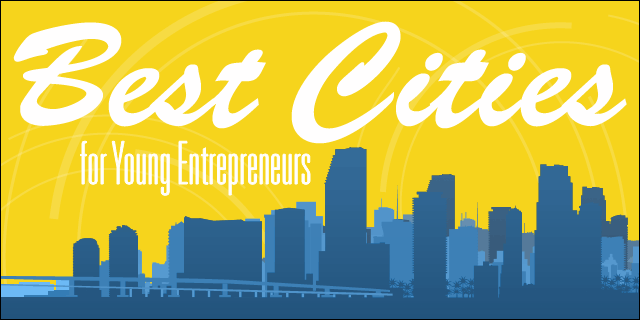 Silicon Valley and New York City seem to be the obvious places for startups to move if they've reached their peak  — or just looking to grow their businesses. However, as the cost of living rises in both of these places, young entrepreneurs can and should look elsewhere. I talked to Carl Schramm who is a professor, author, entrepreneur, and investor about the best up-and-coming cities for young entrepreneurs.

Forget the West and East Coasts, Schramm said the up-and-coming cities for young entrepreneurs are Austin and Miami.

“They are emerging centers for new business, they have lots of new businesses starting and it's like anything, if it's happening, there must be a reason why, says Schramm who is also a contributor to Forbes. ” You don't have to know the reason, but you're playing statistical games. There are aspects to those places that are more conducive to starting businesses.”

If you don't think Austin and Miami are for you, here are a few things to look for when choosing a new place to move your company and team.

Regardless of the city, one trend seems to be true: people who have similar goals will congregate in the same location.

“More and more young people like urban living at least in the style of San Fransisco's urban living so it has the advantage to collect bright kids from everywhere…” says Schramm. “The greater concentration of smart people, the more likely we are going to watch successful businesses emerge.”

Are there cities young entrepreneurs should stay away from? Schramm teaches a course at Syracuse University called “Failed Cities: Fast Cities” a research course where they read literature and examine the current theories of why some cities fail and others continue to grow.

Additionally, after speaking with Schramm, I began to understand the direct correlation between economics and entrepreneurship. I've asked myself a number of questions about this topic such”does location matter for you startup?” and “will an environment make or break your startup?”

These questions are important, but Schramm made me realize that we need to look at the location itself and not just startup communities within those cities. Essentially, factors such as poverty and population can tell us if a city is doomed to fail or destined for greatness.

“We know there are cities where businesses have a very difficult time even staying alive, let alone starting new businesses,” said Schramm. “It's a function of a larger city environment so if a city is losing population it's going to be very hard to sustain a business let alone start one. Economies depend on people and if it's a business focused on service, it needs a population base.”

“It gives them a dynamic of city economies. Not all cities are growing at the same rate,” said Schramm. “Some cities are in fact shrinking.”

While some cities are struggling to stay afloat, Austin and Miami have a growing tech scene and entrepreneurs should be open to relocating to these new regions. Who knows, maybe Austin and Miami will be the next Silicon Valley? Let's check back in 2020.