In the last few days, Marvel's Black Panther has far outpaced the epic opening weekend we had been expecting for months. Theaters across the country were filled to the rafters with millions of viewers excited to see the newest installation of the Marvel Cinematic Universe. In fact, Black Panther shattered a number of box office records with its $235 million box office take on opening weekend, making it the fifth-highest grossing opening weekend in history and the third-highest opening on a holiday weekend.

This level of success, while much more impressive than most, has actually become common place for films featuring diverse casts. Dozens of iterations have received awards, broken records, and generally instilled a little life in the decidedly struggling film industry. However, a lack of diversity still remains a pain point for the film industry, as well as a number of other industries.

Tech, for one, has been infamous for its lack of diverse employees, managers, and chief executives, fueled by diversity reports that paint a woeful picture of tone-deaf initiatives and systematic racism throughout the tech community. But with films like Black Panther succeeding so stupendously, it's time to wake up and smell the roses: diversity is good for business, and it's time for Silicon Valley to get with the picture.

Moviegoers have been treated to an increasing number of enjoyable films with noticeably diverse casts in the last few years. From women-led powerhouse Wonder Woman to the horror dynamo Get Out, Hollywood has begun to slowly but surely provide a platform for women and minority-led stories to shine. And holy crap have audiences responded positively.

In addition to receiving Oscar nominations for Best Picture, Best Director, Best Original Screenplay, and Best Actor, Get Out grossed $176 million in the U.S., making director Jordan Peele the first black director to reach that milestone. Wonder Woman, which was directed by Patty Jenkins and starred a cast of powerful women, was the third highest grossing film in the US, with $412,563,408 in 4,165 theaters, according to Box Office Mojo. And it's not just these movies making an impact; it's all of them.

Among the numerous notable statistics in the study, they found that the average opening weekend for a film with a truly diverse audience sits at $31 million compared to $12 million average for films with non-diverse audiences. Additionally, they found that “seven of the ten highest-grossing movies from 2016 (and four from 2015's top 10) delivered opening weekend audiences that were more than 50 percent non-white.” And that's far from insignificant.

“One of the interesting things that the most successful movies share is that they're broadly appealing to diverse audiences,” said Christy Haubegger, leader of CAA's multicultural development group, to the Los Angeles Times. “People want to see a world that looks like theirs.”

While audiences love diverse movies and Hollywood has opened up to the idea of producing more, there's still a long way to go before the word “equality” can enter the picture. A study out of the University of Southern California found that, across 1,100 films and 1,223 directors of major motion pictures, only 4 percent of directors were women and 5.2 percent were black. This represents a sizable difference that, ideally, will be influenced by the positive numbers coming out of truly diverse movies.

“The hope is that seeing real numbers attached to the success of the inclusion of more voices and diverse casts will be further motivation for studios, networks and others to be really conscious of the opportunity,” said Richard Lovett, president of CAA.

Tech, unfortunately, still has quite a ways to go in terms of their commitment to diversity. With plenty of company reports, op ed articles, and social media posts lambasting the most innovative industry in the world for bathing in white privilege for the better part of their existence, tech needs to take a look at itself and reevaluate where they want to be in the diversity discussion.

It's no secret that tech companies widely and uniformly lack diversity. Even companies like Google, Apple, and Microsoft, who claim that “diversity makes them stronger” and made waves during this administrations' attempted travel ban, suffer greatly from an overwhelmingly white workforce. And that's according to their own diversity reports. 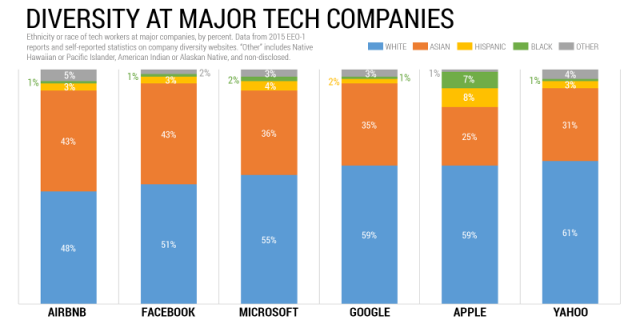 Because the numbers are so small, it can be hard to understand this data in context. So here's a little help: one percent of the workforces at Google, Airbnb, Facebook, and Yahoo are black. For even more context, 12.6 percent of the U.S. population is black. Those numbers don't really add up, do they?

Oh yeah, it gets worse. While these six companies aren't the best and the brightest when it comes to diversity in tech, the companies that are remain few and far between. According to Fortune, only 20 percent of all Fortune 500 companies release their government-mandated diversity reports to the public.

Furthermore, only four percent of all Fortune 500 companies provide the entire report, with the other 16 percent providing partial data on diversity. And rest assured, they aren't hiding the data because they excel at promoting diversity. 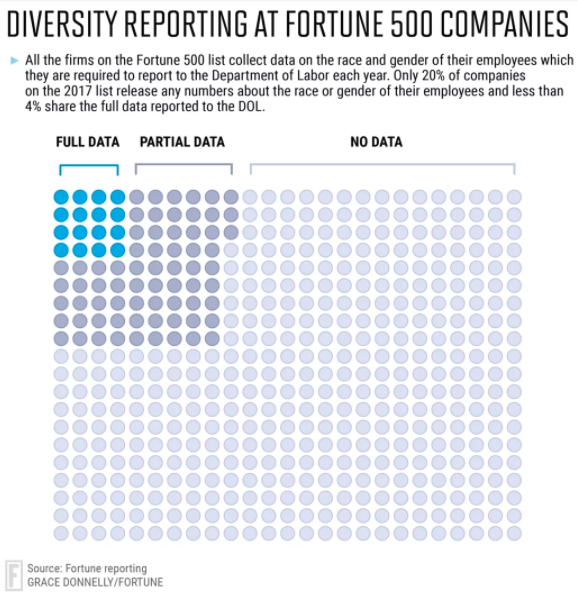 Much like the film industry, tech has been struggling to make diversity a priority in spite of overwhelming evidence that supports its improvement of the bottom line. A McKinsey study found a wide range of statistics that show a positive correlation between diversity and financial success. And if you can't get on board with this, you might need to do a little self-reflection of your own.

At this point in the game, there is no valid argument for the lack of diversity in tech. You can blame it on recruiting all you want. But when push comes to shove, the tech industry is dangerously close to being permanently on the wrong side of history. Meaningful change, whether it be in the form of overhauled candidate funnels, effective diversity training, or executive role shifts, needs to be a priority for tech, if only to make sure the one of the world's most heroic industries doesn't become a villain before our very eyes.

Read more about the lack of diversity in tech on TechCo