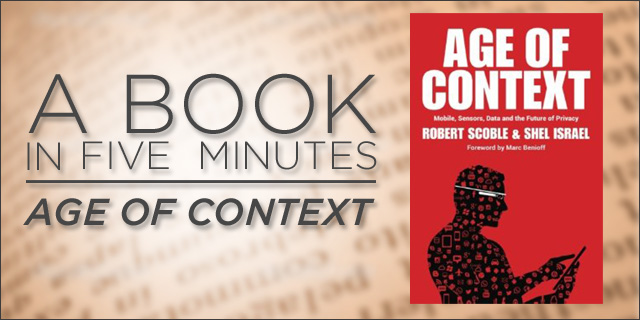 Don’t have time to read? Here’s a quick but comprehensive summary of “The Age of Context” by Robert Scoble and Shel Israel, released on September 25, 2013.

Who should read this: Readers interested in the future of technology, including entrepreneurs who are hoping to build successful applications that leverage mobile, social media, big data, or location-based services.

Elevator pitch: Contextual technologies – which “understand” things about you and your environment – are the latest evolution in tech, made popular by Google Glass. This book describes how contextual technology will influence the way you live and work in the future. We already have fridge magnets that can order your favorite pizza, car software that disables the gas on stolen vehicles, and radiation detectors in Japan; imagine what the future will bring.

Authors: Robert Scoble is a startup liaison officer for Rackspace, spending his time reporting on the latest startups, gadgets, and innovations. Shel Israel writes for Forbes and provides reports and analysis for businesses. They also collaborated on the book Naked Conversations: How Blogs Are Changing the Way Businesses Talk with Customers.

Contextual computing is the most recent development in the progression of technology. It refers to the fact that technologies are starting to “understand” things about you and your environment – things like your schedule, your location, and your heart rate. The main issue these technologies raise is privacy: the reason they can do such amazing things is because they’re gathering more and more information about us.

Five forces are shaping the age of context:

Google Glass is the flagship contextual device, aware of where you look, your location, what you’re doing, and your intentions (like shopping). The retail price will likely be between $200 and $400, and it may take five to ten years to go mainstream. But the uses are endless: from sports to medicine to law enforcement to gaming, to name a few.

Many critiques focus on Google Glass users spying on others, but that’s difficult: you can’t take photo or video without a light turning on or a ping sound that others will notice. The real issue is Google spying on us: what they’ll do with all the data Glass collects. They seem to be a responsible company in that regard, but we can never be sure.

Part of what we lose with online retail is the personalized experience of walking into a store and being greeted by the owner, who knows what we're looking for. But contextual technologies can help bring some of that back. Uber, for example, can learn your limo habits and dispatch a car to pick you up before you request it. VinTank knows when wine enthusiasts enter Napa Valley and works with their winery partners to send exclusive coupons and offers. These “right-time experiences” will start to deliver what you want when you want it, just like your neighborhood shopkeeper.

The car industry is another area where contextual technology is ubiquitous. Cars have an event data recorder similar to the black box in airplanes, tracking location and other data. They can learn your preferences in seating position, gas stations, restaurants, and more. They can brake automatically to prevent a crash, or turn on windshield wipers when it starts raining.

The issue here is how third parties will use this data, including insurance companies, the government, and used car buyers.

While some car makers want the car’s computer to be your digital hub, it’s best if your smartphone assumes that role. Our phones go everywhere with us, we choose the operating system, and young people are increasingly preferring phones to cars.

Self-driving cars, which use contextual technologies to sense the environment around them, can be safer and more energy-efficient. Google is already testing its driverless cars, which use an expensive rooftop spinning device with laser imaging detection and ranging (lidar) technology that can “see” lane markers, signs, people, and cars. Driverless cars will be especially appealing to the blind. But to go mainstream, they’ll have to overcome the “freaky factor,” become affordable, and maneuver government regulations. They'll probably go mainstream in five to fifty years.

The New Urbanists are a group of people who live in cities, are educated and financially comfortable, and use smartphones but rarely use cars. They are interested in connecting with local government to improve urban environments, and they do that using plans and 3D models shared in the cloud. The maker movement, popular in cities, also follows this same spirit of community improvement.

Health sensors, gadgets, and social networks are a big trend lately, from pills with sensors that can tell if you’ve taken them, to the Fitbit and Nike+ Fuelband, to the FAST scanner that can detect cancer cells and test treatments on them. The challenge will be convincing current stakeholders to abandon the status quo in favor of better health.

Wearable technology is making us healthier, more informed and aware, and more productive – ranging from bras that shock rapists or detect cancer to t-shirts that can charge devices. As the trend continues, wearable tech will become more and more integrated with our bodies, eventually leading to implants. But unlike the science fiction, we will still be in control.

PDAs flopped, only to have smartphones take center stage years later. But the next generation of smart devices will be PCAs: personal contextual assistants. PCAs are open, cloud-based mobile platforms that communicate with other apps in order to figure out your intent and anticipate actions you might want to take. For example, they can message coworkers that you’re running late, suggest you drop by the mall for a sale, or schedule a recurring mortgage payment. Some leaders in this space include Google Now, EasilyDo, Atooma, and Lola by SRI.

In the contextual home, devices communicate with each other and with us to make things safer and more sustainable. Door locks, windows, bathroom mirrors, toothbrushes, and refrigerators will all become smart, understanding when we want things from them. Some of the leaders in home sensors include SmartThings, WigWag, and CubeSensors. TVs will also be able to suggest customized content depending on who’s watching, and robots will become more ubiquitous.

In the past, marketing and advertising have been annoyingly un-tailored to us as individuals. The contextual future of advertising, however, is pinpoint marketing: where you get offers of goods and services based on where you are, what you’re doing, and what you might do next. Revenue will likely come from micro-commissions: for example, Google Glass might suggest that you watch a movie at a nearby theater, and receive a small commission when you pick up your ticket. In one sense, privacy isn’t a big problem because you can turn off these notifications when you want. But it becomes a problem when contextual technologies can start to guess your mood and share this information with others.

The conflict between security and privacy isn’t likely to be resolved anytime soon. But it’s clear that, in the long run, consumers will want to do business with companies they trust. That means plain-language terms of service, the ability to “go private” or turn off tracking for awhile, and not assuming we want to share information with others (or, at least, ways to correct false assumptions).

In truth, “contextual technology” sounds like a complicated and less-than-interesting subject. (Perhaps the industry needs a rebranding.) But through pages and pages of fascinating examples, Scoble and Israel have made it incredibly accessible.

A big part of the book’s allure is the authors’ ability to imagine the future. We may think we’re so modern nowadays, walking around with our smartphones and their new fingerprint-detection technology. But reading The Age of Context will make you realize how much further we have to go. One idea that struck me was walking into the bathroom in the morning, brushing your teeth with a cavity-detecting toothbrush, and seeing medication reminders on your smart mirror. So futuristic, yet so simple at the same time. And if you like that, you’ll surely enjoy the last fanciful chapter of the book, called “Reunion: 2038.”