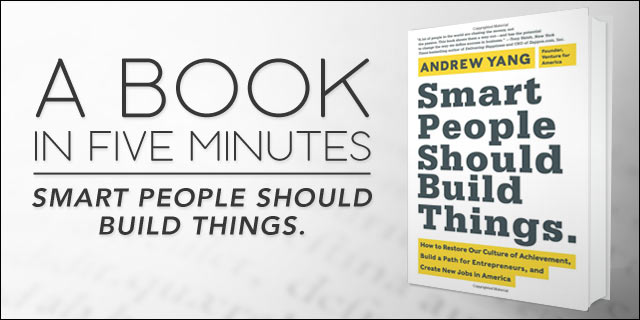 Don’t have time to read? Here’s a quick but comprehensive summary of Andrew Yang’s “Smart People Should Build Things: How to Restore Our Culture of Achievement, Build a Path for Entrepreneurs, and Create New Jobs in America,” released February 4 by Harper Business.

Who should read this: You’ve spent two years at McKinsey and are daydreaming about the possibility of starting a food truck that sells cookies and milk.

Elevator pitch: Over half of top college graduates today will enter one of six career paths: management consulting, finance, medicine, law, graduate school, and Teach for America. Is that a good thing? Andrew Yang argues that the U.S. has a talent allocation problem, where the roads most traveled for talented students land in supporting large companies, not building new ventures. In his own words, “we have too much icing, and too little cake.” Yang lays out a vision for enticing elite students to think again about entering startup culture and blazing a new path.

Author: After attending Brown and Law School, Andrew Yang decided to quit corporate law and start a dotcom business. After the dotcom bubble burst he joined the team at Manhattan GMAT and oversaw a time of unprecedented growth. After its acquisition by Kaplan, he started a nonprofit, Venture for America, recruiting and placing top graduates in startups throughout the nation.

Where does talent go in America? As the former president of a GMAT prep company, Yang lays out the various paths of prestige. Achievement in the U.S. looks like becoming a lawyer, doctor, banker, or consultant in San Francisco, New York, Washington, DC, Chicago, Boston, or Los Angeles. Young people have limited options in a limited number of megacities.

To illustrate his point, he tells his own story, from Phillips Exeter to Brown to Columbia Law School. Drifting into a career he wasn’t particularly drawn to, Yang realized that as a lawyer he was making more than his father, a PhD with several patents for IBM. As his editing skills improved he realized the golden handcuffs were forming quickly, and if he didn’t leave soon he would never leave at all.

Quitting his job, he entered the world of startups and, as many do, failed. But the reward of building something, even momentarily, hooked him. He decided to learn from a more experienced entrepreneur and was an early hire at a health care records company. Dotted through his narrative are lessons learned the hard way, which hopefully you can learn the easy way.

In a possibly controversial twist, Yang argues that it isn’t too difficult to become a doctor or a lawyer. The path to those fields is very well paved, and it takes a lot of work, but not ingenuity and certainly not entrepreneurial muscle. If you’re willing to work long hours, spend the money on school, and pay dues, a person can make a good living following one of the six prescribed paths of success.

But what the country really needs are jobs, particularly jobs in companies that are growing. Without healthy companies, there are no complex transactions to support the bankers and lawyers and consultants we already have in the graduate school pipeline (see the earlier image of icing and cake). “We no longer manufacture devices, we manufacture analyses,” he writes. And while it might be prestigious to work for McKinsey, it’s not necessarily the best preparation for starting a business and becoming comfortable with risk.

But let’s imagine that more top students take an entrepreneurial exit. How can they be successful? In the second section of Smart People Yang lays out the common challenges of startups, from raising money to developing the product, building a team, and finding paying customers. Through each challenge he makes an unusual claim: entrepreneurial spirit isn’t necessarily innate; it can be developed through hard work and perseverance. In other words, don’t give up on becoming an entrepreneur if you’re not Bill Gates or Steve Jobs. If we pair smart, hardworking young people with startup teams and mentors, they can make a meaningful contribution which may lead to more jobs, and possibly more new ventures in the future.

Yang’s nonprofit, Venture for America, is set up to do that work. Not unlike the Teach for America recruitment process, students go through a competitive application funnel to join VFA’s two year fellowship program. If chosen (which is unlikely—they have an 11% acceptance rate) students attend a startup boot camp. Upon the completion of boot camp, graduates work in startups in midsize American cities—Detroit, New Orleans, Las Vegas, and Providence, among others.

From the stories included of current fellows in Smart People, it is apparent that many of these students intend to stay in startup culture for a long time. Max Nussenbaum, a fellow in Detroit, testifies….

Much has been made of the extraordinary degree of independence and responsibility that you have at a startup, even as a fresh-faced graduate…you can matter at a startup in a way you can’t at a big company—not unless you spend years slaving your way up the PowerPoint hierarchy….In some cities it’s possible to have an impact from the moment you step off the plane…Detroit craves people. And because of that, you can matter the minute you get here.

Is this the silver bullet to create more entrepreneurs and revitalize stagnant city economies? “We don’t have any illusions,” writes Yang. “It’s not as if training and depositing a few dozen brilliant young people in Detroit and other cities every year is going to miraculously rejuvenate each region….But let’s allow ourselves to imagine that after two years of working at a startup or growth company, the drive to build things gets into their blood.” And with that drive, it might just be possible to bring more jobs to Detroit and New Orleans.

I’d imagine this book is encouraging to read, especially if you recently started a business and wonder if you made the right choice. It’s also a clarion call to those in cushy but unsatisfying jobs. Is this really what you want? Do you know you have the freedom to do something else? Let Andrew Yang’s story, along with the Venture for America Fellows, challenge you to contemplate a different path for prestige—one where you define success.

Ashley May lives and works in Washington, DC where she researches how private charity can make a difference in everyday life. Her reading list ranges from metric frameworks to epic poetry. From time to time, she'll tweet @amay922.