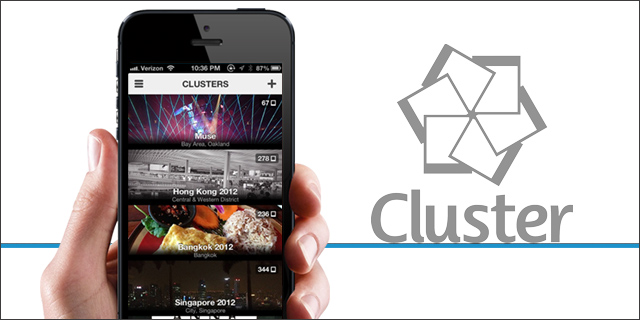 You start an album by uploading a bucket of photos and inviting other friends to collaborate. Cluster detects the date and location of those photos, and automatically recommends to your friends which of their photos to add.

According to cofounder Brenden Mulligan, Cluster is for all those times you promised to share pictures with a group but never did. But Cluster is shying away from real-time photo sharing because they don’t want to interrupt the special, memorable group experience itself.

Mulligan is the founder of Onesheet and a mentor at 500 Startups, and he started Cluster with former YouTube developer Taylor Hughes. Below is his take on why shared experiences deserve special treatment.

Tech Cocktail: Cluster photos are private, only shared with people who collaborate on the album. Why is that?

Brenden Mulligan: I actually don’t think the general public is interested in seeing albums created by other people, unless it’s actually a professional photographer. If I go to Hawaii for the weekend and I take 200 pictures, my 30,000 Twitter followers don’t want to look at them. They want to see the two that I put on Instagram. But the people who were with me in Hawaii probably want to look through all of them, because they want to see if there were pictures of them; they want to see my perspective on what we all did together…

We’ve had a couple of bachelor and bachelorette parties that wanted to have everyone dump their photos in, but they might have been doing things that they didn’t want everyone to see. So there’s not a gray area – like, well, friends of friends can see them. It’s literally if you’re not in the list of people who have been invited to the Cluster, you have no access to those photos. . . . It’s very, very private to that small group of people.

Tech Cocktail: What interested you about working with shared group experiences?

Mulligan: I haven’t talked to anyone for the last few years who doesn’t feel that experiences shared with other people are some of the richest experiences that we all have. There are very few times I talk to someone who tells me about some amazing thing they did alone. And so I think that the act of sharing an experience with a group of people is something that’s just fundamentally human, and we all value.

Remembering and making sure that we have evidence and memories from those experiences becomes more important. Before, it was maybe Dad who carried around the camera, and everyone else just wandered around. But now, because so many people have smartphones in their pocket, and the cameras on those phones have become so good . . . everyone who’s a part of those experiences is capturing them, and I think that’s the first time that’s happened.