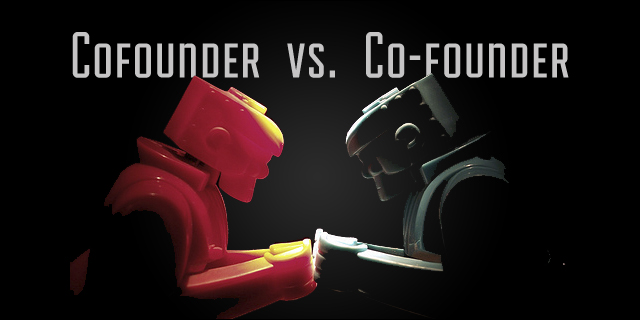 There are many universal truths in the world of starting up.  Hustle is key to success, but so is luck.  You're only as strong as your network.  Finding the right investor is as important as the right investment.  Tech Cocktail Mixers are the preeminent form of exposure.  Et cetera.

But when it comes to something as basic and foundational as how to spell the title of a joint founder, there is no consensus.  I refer to, of course, co-founder (or is it cofounder?).

Although the variance is a single character, to many, the words are a world apart. I asked a few entrepreneurs to weigh in…

“I prefer cofounder because it is more efficient by one letter. Since I expect I will type it over 7,451,367 times in my life, that saves me a lot of time,” – Brad Feld, Managing Director at Foundry Group, Cofounder at Tech Stars.

“Cofounder, it's shorter.  As a cofounder, you need all the time you can get, so start saving it early and eliminate as many characters and key strokes as possible.  Fuck grammar, that's for professors,”  – Logan LaHive, Founder/CEO at Belly.

“‘Cofounder' is like the minimum viable product of the word, and ‘co-founder' is like your bloated app with too many features. Startups believe in simplicity, don't they? To paraphrase Strunk and White, ‘Eliminate unnecessary hyphens,'” Kira Newman, Senior Writer at Tech Cocktail.

“Personally, I much prefer using a dash in “co-founder” because it puts more emphasis on the “co”…as in we’re in this together,”  – Matt Galligan, Co-founder at Cir.ca.

@zrdavis correct grammar (http://t.co/EPXJ8BRXWt) suggests “cofounder” but it looks seriously unnatural so I use “co-founder”

@zrdavis not normally a fan of hyphens, but use them in this case.

I got into a fight with my copyeditor about this for my book, then I realized it doesn't matter. Without Their Permission does use “co-founder”.  – Alexis Ohanian, Co(-)founder at Reddit, Founder at breadpig.

Let's settle this debate once and for all.  Which is it: co-founder or cofounder?  We want to know what you think.  Voice your opinion by voting in the poll below – and elaborate in the comments beneath.