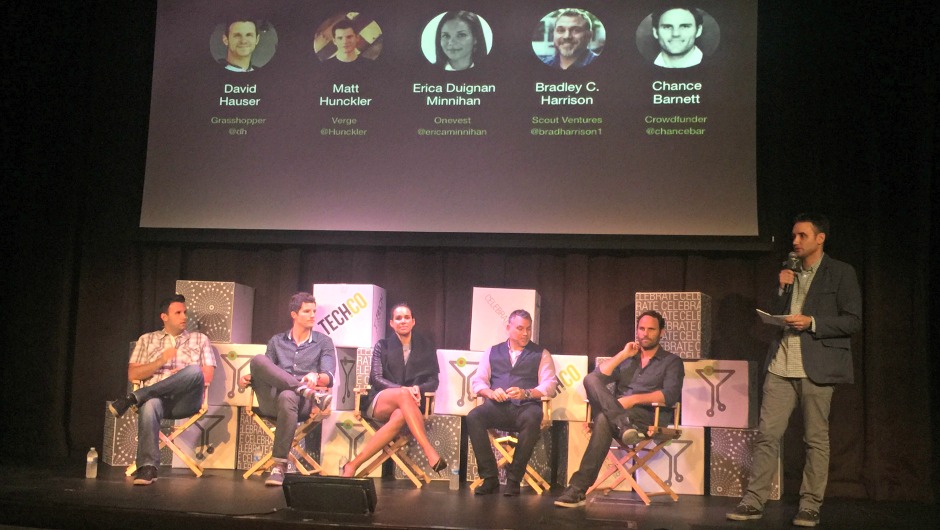 According to Bradley Harrison of Scout Ventures, there are three things that kill a startup: running out of money, having shitty investors, and making bad hires.

Regardless of what stage startup you are, funding is always a priority. Be it bootstrapping, crowdfunding, angel investors, or venture capitalists, to keep your business afloat, you need money. On day two of Celebrate we were joined by five esteemed experts on the subject of the current funding landscape and how startups can get funding today.

Moderated by Verge’s Matt Hunckler, he led a panel consisting of David Hauser (Grasshopper), Erica Duignan Minnihan (Onevest), Bradley C. Harrison (Scout Ventures), and Chance Barnett (Crowdfunder). Between the experts there was a healthy debate regarding diversity, using new funding methods such as crowdfunding, and the issue with unicorns.

Most recently, many startups are taking to crowdfunding platforms to find their initial funding. Between the panelists, there was a line drawn in the sand between those for and against using the approach. On one hand it provides easier access to capital, on the other there are smaller returns for investors and may not come with the support a startup needs. According to Hauser, some businesses should never raise money. Because crowdfunding makes money more accessible, this can contribute to the issue and also has small returns for investors.

Unless an investor has a large portfolio, they won’t be making a lot of money. Most non accredited investors using crowdfunding platforms usually have under five companies in their portfolio. However, Hauser does believe the platforms are getting better. Minnihan built upon Hauser’s comment, focusing on the positive benefits of crowdfunding. “We make the process as seamless as possible. Foundation of investors who want a portfolio of companies, a portfolio of early stage startups.”

Although making funding more accessible, a startup needs more than just money. Harrison chimed in to say that for a startup seeking an investor, they should be seeking value added investors. “It’s more important than the actual amount.”

Regardless of source, location is also a common concern for startups as well. Some older VCs prefer their portfolio companies to be in specific regions or more accessible, but this is changing. Through platforms like Onevest and Crowdfunder, they are also making it easier to be location agnostic, at least until it’s time to bring on larger investors. This of course brings up another important point, which is that crowdfunding may be a great initial boost of money, according to the panel it should not be the only strategy for future growth.

If there was a single common theme among the panelists, Chance Barnett may have said it best, “Men are just not investing as much in women startups.” Mirrored by Minnihan and Hauser, all three stated that the initial issue was due to in part that there was also not as many women investors. The same can be said about minorities.

“There are plenty of competent women VCs. It’s just really hard to get funded. If more women and minorities want to get funded, they need to get involved,” said Minnihan. She went on to say that there are biases between men, some who may not even be aware, but can also be less risk-averse than their women counterparts.

On the other hand, Harrison feels there is less of a diversity issue as 35% of their founders are women. When a deal comes in, they don’t see the people attached to them. Scout evaluates them based on their set criteria, and then the people are added into the mix.