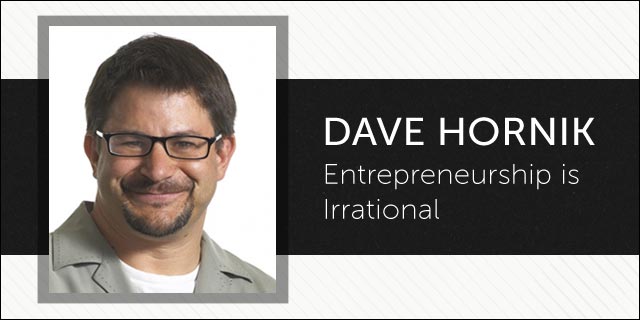 David Hornik started as a lawyer, but he was drawn to work with startups and get more involved in business. As an investor at August Capital for over 14 years, he’s been able to do just that.

VCs have their own harsh realities – for example, having to tell their partners that a portfolio company is shutting down and they just lost $10 million. But the harsh realities of entrepreneurs may be even more daunting.

“There are so many more ways to fail than there are to succeed that it’s miraculous,” Hornik told the audience at TCWEEK in Vegas last Thursday. “Entrepreneurship is irrational. Any of you who think that it is a good idea to start a company – get a grip. On a risk-adjusted basis, you guys are morons.”

Part of that has to do with the difficulty of catching the wave and succeeding. But part of it also has to do with the fact that you have to convince other people – customers, employees, and investors – to be irrational with you.

“Not only do you have to convince yourself that it is a good idea to take a job that has no stability at all and where your goal is to convince people to do things that they don’t want to do – and shouldn’t – but then you have to go convince a bunch of other people to stop doing whatever they’re doing to join you,” said Hornik. “‘How’s that job at Oracle? Forget it! You should come over here. You totally should not take that awesome job at Wired because that’s super respectable. . . . Isn’t that a good plan?’ I don’t think so.”

Hornik cracked a lot of jokes, but in the end his message was sincere. Sometimes, it’s the irrationality and the craziness that can draw you in and bring you together.

“There will be days when you feel like this was crazy for you to do. You’re not alone. Everybody, even the people who have figured it out, have been through those minutes,” he said. “But if this is something where you can’t see yourself doing something else, then run at it because it’s amazing.”