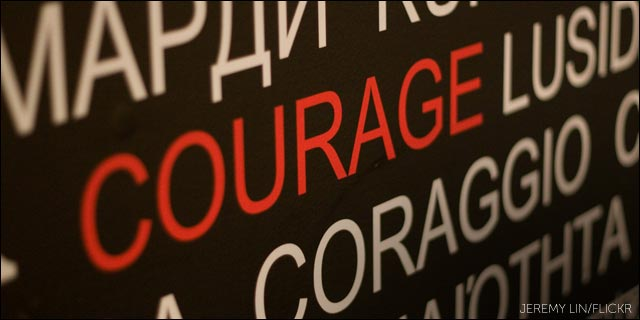 “I was absolutely petrified,” she says. “I would come home most nights and cry, thinking, ‘I’m going to be found out, I shouldn’t be doing this.’ It felt almost illegal.”

It’s something we all feel, at one time or another. Seattle UX designer Dylan Wilbanks only confirmed that with his recent post on Medium, “You are better than you think.”

“15 years in . . . I still feel like someone is going to call me out on not knowing enough, insisting that I do not belong with these people,” he wrote. “I’m left feeling as jittery as someone in Tornado Alley just waiting for the big storm to come and blow me away.”

Maybe the answer to imposter syndrome isn’t what you’ve done, but who you are. I think Baker was onto something when she told me that, whenever she feels like something is impossible, she has to try it. She has courage and bravery; she is putting herself out there, willing to fail. But if she does fail, that doesn’t show she’s an imposter – it shows that she's a fighter.

This is part of what researcher Brené Brown calls “daring greatly,” an expression she got from Theodore Roosevelt:

“It is not the critic who counts; not the man who points out how the strong man stumbles, or where the doer of deeds could have done them better. The credit belongs to the man who is actually in the arena, whose face is marred by dust and sweat and blood; who strives valiantly; who errs, who comes short again and again, because there is no effort without error and shortcoming; but who does actually strive to do the deeds; who knows great enthusiasms, the great devotions; who spends himself in a worthy cause; who at the best knows in the end the triumph of high achievement, and who at the worst, if he fails, at least fails while daring greatly, so that his place shall never be with those cold and timid souls who neither know victory nor defeat.”

In Brown’s words, if you’re an entrepreneur, you are already in the arena – and you can’t be an imposter.