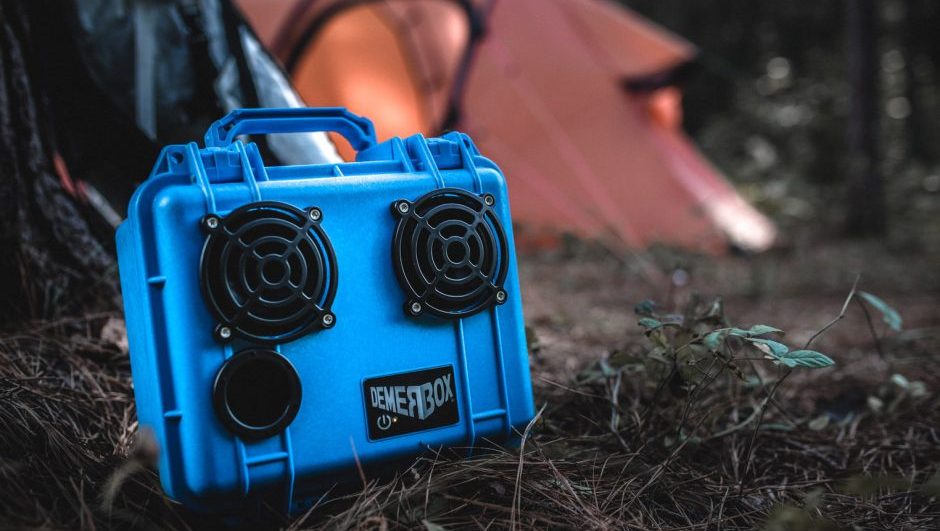 A three-time Grammy Award-winning country musician and entrepreneur has quietly acquired a majority stake in DemerBox, the Portland, Maine-based startup that launched on Kickstarter in 2014 with its rugged, high-end, Bluetooth speakers.

DemerBox’s new owner is Zac Brown, who besides touring with his band, owns and operates a company called Southern Ground, which houses a number of lifestyle brands, including a music festival, a restaurant, a winery, a knife maker, and a leather-goods manufacturer, among others.

The deal closed in mid August, according to founder James Demer, who built the first DemerBox in his Falmouth basement in 2010. Details of the transaction are not being disclosed, but Demer and his cofounder, Jayson Lobozzo, have retained a minority stake in the business and continue to work for it.

The acquisition is good news for the pair. It allowed them to quit their day jobs in the TV and film industry, pay back their families and friends, and recoup the roughly $40,000 each had poured into the business, “and still have a little bit left over,” Demer said.

They both have three-year contracts with Southern Ground and plan to continue their mission to grow DemerBox into an audio electronics brand that can go head-to-head with the likes of Bose.

“Jayson and I did not make enough money to retire on—not even close,” Demer said. “It’s really going to come down to us being able to turn our tiny little company with a small, but very, very loyal fanbase, into a much bigger company for us to see financial success.”

However, the deal is bittersweet for those of us who have followed the company since its successful Kickstarter campaign in 2014. If DemerBox grows into a major audio electronics company, it won’t be doing so in Maine. As a result of the acquisition, the core of the business has moved to Georgia.

How the Deal Came Together

Maine Startups Insider last spoke to Demer in January. At the time, DemerBox had recently received a $25,000 grant from the Maine Technology Institute and used that money to hire Blaze, a local Portland marketing firm, to build the company’s brand recognition and drive sales. They opted to specifically target the “overland” crowd, which Demer describes as “glorified car camping.” Think Land Rovers and Yeti coolers.

The DemerBox is a perfect fit for that market. Built inside a Pelican case—a brand of high-end storage cases used extensively in the film and TV industry to protect gear—the DemerBox is a hip, colorful, rugged, Bluetooth-enabled speaker that can also double as a place to carry a few beers. At $399, it’s also a premium product.

Long story short, a friend of Zac Brown’s bought a DemerBox after seeing it on an online overland forum. He showed it off to Brown, who was intrigued and bought his own DemerBox. That was in December 2016.

Brown brought his DemerBox on a nine-day spearfishing trip to Belize. When he returned, he wrote to Demer and Lobozzo and told them his DemerBox was one of the greatest products he’d ever purchased. Were they open to discussing a partnership?

So, earlier this year, Demer and Lobozzo hopped on a plane to Georgia and spent some time getting to know Brown. They got along, found their interests aligned, and six months later sold Brown a majority interest in DemerBox. As part of the deal, Demer has moved to Georgia to build the company while Lobozzo, a Cape Elizabeth resident, commutes back and forth.

Despite the move, DemerBox has retained a presence in Portland. It hasn’t given up its small manufacturing space in Portland’s Bayside neighborhood, which Lobozzo will still use for prototyping. And it’s still working with some of its Maine partners, including MODA Electronics in Gorham, Demer said. This is partly due to an agreement with the Maine Technology Institute, which has provided the company three grants totaling roughly $55,000 since 2014.

After the acquisition was complete, DemerBox actually returned the unused portion of the most recent $25,000 grant it received in September 2016, and agreed to maintain a presence in Portland until January 2019, according to Demer. But neither Demer nor Lobozzo plan to move permanently to Georgia.

“I’m not here to build a life,” Demer said, speaking from Peachtree City, Ga. “I’m here to build a company. My intention is to be back in Maine. Maine is where my heart is.”

He said he and Jayson joke about cashing out from DemerBox after a few years and going back to start another company in Maine.

“Now that we have better idea of what we’re doing, it’d probably be a little less painful the second go around,” he said. “Startups are hard.”

Despite their affinity for Maine, Demer and Lobozzo were drawn to the deal because it offered them more than just money.

They had been in the process of exploring opportunities to raise capital in Maine from the usual suspects—Maine Venture Fund, the Maine Angels, etc. But the pair was looking for more than money; they wanted the money to come with expertise to help guide them through the multi-billion-dollar audio electronics industry.

“At the end of the day, Jayson and I are just a couple guys from the film and TV industry,” Demer said. “We have a great product; we knew that. We have a great fan base; we knew that. But we didn’t have any expertise in turning a hobby into a real electronics brand. We didn’t know how to compete with the big companies.”

As it turned out, Brown offered more than money. Besides the obvious benefit of having a musician celebrity as DemerBox’s chief spokesperson, Brown also brought Jeff Willard to the deal.

“When Zac and Jeff came along, we saw this as a real trifecta of financial capital, celebrity marketing potential, and expertise from someone who helped run one of the largest audio electronics groups in the world,” Demer said. “It’s hard to say no to that.”

“I used to run marketing for one of the biggest audio companies in the world and I’ve seen every type of Bluetooth speaker imaginable,” Willard told Maine Startups Insider. “This was one I never thought of in my wildest dreams. The DemerBox goes so far beyond the typical Bluetooth speaker by using the acoustic chamber of an indestructible Pelican case both as a means to create amazing sound and provide storage. Brilliant.”

Willard’s expertise has already begun paying dividends for DemerBox. They recently received a private-label order for 4,000 units. To put that into perspective, Demer and Lobozzo sold a total of 650 DemerBoxes in all of 2016. They’ve also signed a deal with Amazon to enter the Amazon Exclusives program, which will increase the brand’s visibility on the online retail giant’s website.

Last week alone they produced 400 DemerBoxes, almost as many as they did in all of 2016. The new arrangement has allowed DemerBox to hire four employees (all in Georgia) with plans to hire another four at the Southern Ground facility in Peachtree City, according to Demer. Demer is amazed at how far he and Lobozzo have come.

“I always had the fantasy of this turning into a real business, but I never envisioned what it would look like and never in a million years would have guessed this would be where we are today,” he said.

The original DemerBox that Demer built in his Falmouth basement back in 2010 is on display in the company’s new space in Southern Ground’s facility, and he takes the opportunity to show it off when people stop by the facility.

“Every time I pick that box up, I get a little electric jolt of where we started, how hard we worked to get to where we are, how many mistakes we made, and what we had to overcome to get here,” Demer said.

Read more about the Maine startup ecosystem at TechCo