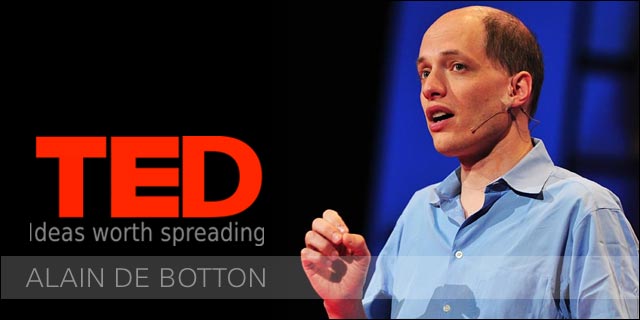 If your startup is failing, struggling, or just taking a long time to get off the ground, your self-esteem might be taking a hit. But it shouldn’t, says entrepreneur and philosopher Alain de Botton.

In a TEDGlobal talk called “A kinder, gentler philosophy of success,” de Botton outlines the societal factors that are ganging up to make us feel like losers.

1. Job snobbery is rampant, where people you meet at a party or even your family is quick to judge you entirely based on your job.

2. We’re told we can do anything. This is a society of equality, after all! “It’s made to feel . . . that if you’ve got energy, a few bright ideas, a garage, you too could start a major thing,” says de Botton. So when you do worse than your peers – especially people quite similar to you, like friends or classmates – it’s easy to feel envy.

The solution, he says, is to change the way we judge people. Instead of jumping to conclusions, we should recognize the role of chance, luck, haphazard, whatever you call it. If you’re tempted to laugh at a silly startup idea that failed, or a ridiculous product with no funding on Kickstarter, remember that you don’t know all the factors that led to that failure. Sympathy, not ridicule, should be our default attitude.

A final remedy for our own struggles is to make sure that the things we’re struggling for are things we truly want. Failure may be tough, but succeeding at a goal and then realizing you didn’t want it in the first place is unsettling. “We should focus in on our ideas and make sure that we own them – that we are truly the authors of our own ambitions,” says de Botton. That, at least, is something that entrepreneurs can succeed at.