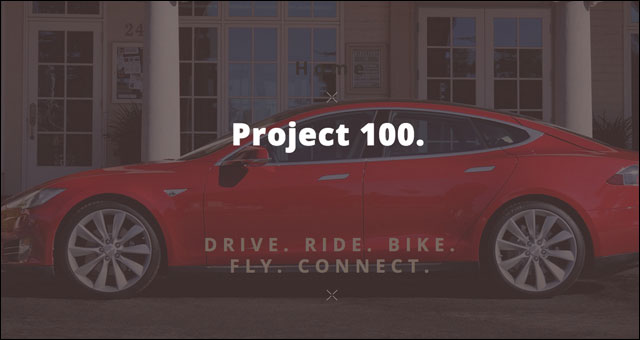 Buying and maintaining a car is something many of us have been accustomed to since our sweet sixteenth birthday. But there has been a trend to go car-less and with this trend, new services like Zipcar, Uber, Lift, Sidecar and more have launched to provide options when you have no wheels. Today, the Downtown Project, the downtown Las Vegas revitalization project led by Tony Hsieh, announced it is launching Project 100. Project 100 is the code name for a complete transportation system designed to help you get rid of your car and be more connected to your neighborhood for the same cost of (average) monthly car ownership. Led by Zach Ware, the effort is in line with the Downtown Project's goal to help revitalize downtown Vegas in order to become the most community-focused and connected city in the world.

Project 100 is a membership-based system that is controlled by a mobile application. The application will give you access to cars, like Zipcar; drivers, like Uber; and bike share, like viaCycles, all under one offering. Centered around a sophisticated mobile booking system, Project 100 uses zones to determine the best transportation method for your location and specified action. Currently Project 100 is focused on Las Vegas but it is being built for scale.

Project 100, which has been in the works for awhile, had a big moment last week when they placed an order for one hundred Teslas on March 29th – the single largest US order by one entity to date.

Tesla founder and CEO Elon Musk had this to say of the project:

“We are excited to be partnering with Downtown Project and Project 100. I am a big fan of their innovative efforts to help revitalize and transform downtown Vegas.”

The project is ambitious as there has never been a product quite like this to date. If it works, customers will have access to cars, bikes, drivers, and potentially other unique options, like planes and helicopters, all at your fingertips via an app.

Zach Ware of Zappos, Downtown Project, Work In Progress, and now Project 100, sat down with Tech Cocktail to share details about the new program.

This video is part of the Tech Cocktail Conversations podcast – subscribe on iTunes.

Project 100 posted a great Q&A on its website, which we have posted below:

Project 100 is the code name for a complete transportation system designed to let you get rid of your car and be more connected to your neighborhood. It includes on-demand cars with drivers, shared cars you can drive yourself, bikesharing, shuttle buses and more. The experience is simple: open an app so we know where you are and tell us what zone you want to travel to. With that information we’ll give you a set of options, for example, 1 – Be picked up by a driver in a Tesla in 3 minutes, 2 – Drive yourself in a low range electric vehicle that’s 0.2 miles away, 3 – Grab a bike that’s 0.1 miles away or 4 – Hop on the party bus that will be near you in 4 minutes.

How does it work?

We want the member experience to be as simple as possible. That’s why we’re focused on the simplicity of a mobile application. What goes on behind the scenes is anything but simple and we don’t want our members to have to worry about any of that.

The services available to you are structured around a set of zones, in the case of Las Vegas: Downtown (roughly one mile around a central point), Residential (roughly two miles around the Downtown zone), the City and the Outer Zone (basically anything outside of the metro area which in Las Vegas is easy to define…the city basically stops).

Based on your answers, your membership level and supply and demand, we can offer you a set of options that will get you picked up or in a vehicle or bike to drive within a guaranteed amount of time that’s consistent. For example, you will always know that if you are in the residential zone and want to get to the Downtown zone, you can be picked up at your door within ten minutes.

How is this different from Uber or Zipcar?

We looked at each of those types of programs individually for a long time and worked closely with a lot of the big names in the transportation space to figure out a solution that met our goals. Ultimately we decided to build something different that’s designed to replace your car 100% of the time. You have one key to your car and we wanted to build something that replaced that one key with one membership and not force you to decide each time which system was best for your need right now.

We also spent a lot of time studying the state of transportation in cities and found that confusion and friction is what causes most people to choose not to travel to an area regularly. If you live two miles from the Downtown zone, for example, that’s a long walk for a night out, getting a taxi anywhere other than NY or Chicago is impossible and public transit is built for the masses. We think there’s a better way to solve all of that.

Las Vegas is a very disconnected city. At Downtown Project we’ve spent a lot of time working to increase collisions between people. History shows us that areas with residential density of at least 100 people per acre combined with ground level activities like restaurants, workspaces and gathering places leads to innovation and a greater sense of happiness. When we looked deeper we realized the actual output of that density was collisions between people.

There were inaccurate reports in the media earlier this month that claimed we had already purchased 100 Tesla Model S’s. We were pretty confident we were going to buy some number of Model S’s even as a test, but weren’t otherwise sure and we hadn’t spoken in detail to Tesla. A couple of weeks ago we visited the factory (which is really, really cool) and were sold. We placed the order officially on March 29 and literally received 100 email order confirmations.

We chose the Tesla Model S as our primary vehicle for a lot of reasons. It’s a beautiful yet functional sedan that’s very fun to drive. It’s also a big computer on wheels which gives us the opportunity optimize the member experience over time and test a lot of theories about how people use vehicles. Tesla thinks like a startup and our conversations with their program and engineering teams so far solidified that they were the right long-term partner. Most importantly we wanted to replace peoples’ traditional vehicles with vehicles that do less harm to the environment than a traditional gas-powered vehicle. Since Teslas are 100% electric with excellent driving range, the choice was clear.

Going 100% electric carries with it a ton of challenges. It’s one thing to build a 100+ car system with traditional cars you can park anywhere. Electric vehicles require power so we’re working hard to build the infrastructure to support a system of this size. We’ve been working with our local utility partner NV Energy for a while now to do that the right way so our system respects our environment.

What about the tech behind this?

This is the most exciting and challenging part. To keep the member experience simple we’re doing a lot of things behind the scenes. Last year we met a startup called Local Motion that was focused on building software to power large transportation systems. Since we met they’ve been busy building hardware that taps into a car’s onboard systems and reports location, unlocks doors, handles maintenance and more. Along with that they’ve built a really cool fleet management system. We’ve been working with them for a while now to develop a good chunk of the technology that will power Project 100 across all of our vehicles including bikes.

Not only are we managing real time vehicle availability based on complex legal and supply/demand logic, but we have to know when a car needs to be charged and where it needs to go to do that, we have to respond to a member who needs to be picked up on the edge of the city, we need to see when a station is out of bikes and have the prediction capability to plan the optimal busy routes for party buses.

Are there more than Teslas?

Yes. Over the next few months we’ll be testing a lot of different types of vehicles. A big question we ask is when a member wants to travel ten blocks to a store, is a Tesla the best way to go? It’s a large vehicle that requires a regular parking space. Is something like a low-range Polaris GEM a better vehicle for quick trips? We think it might be. It’s super small and easier to park in non-traditional parking spaces. We’ll be testing theories like this before launching full scale this fall.

We also know that sometimes people need to move a couch or go on a hiking trip. So the system will have a number of more utilitarian vehicles available, likely at a slightly higher cost, to fill in those gaps.

That seems like a lot of cars. Why so many so fast?

We’re asking members to get rid of their cars. We think we have a responsibility to show them we’re serious about helping them replace them. So we wanted to start big so our members know they will always have a vehicle available when they need one. If we launched with 4-5 cars, there’s a good chance that one wouldn’t be available when a member needed it and that would be really bad.

Where will the cars, bikes and other things be?

We’re building a version of a hub and spoke system. Initially most of our vehicles will “live” in a hub that’s near a lot of retail and hangout places. That’s partially to increase collisions between people but also because of the complexity of charging 100+ vehicles. We’ll launch with a number of spoke locations for bikes and cars around the downtown area and add more as our membership grows. Where there isn’t a spoke or an available vehicle 5-10 minutes away, our members will be able to hop in a car with a driver within 5-10 minutes to get to the vehicle they want or the place they want to go.

How much will it cost?

Nothing like this has ever been built before so there’s no way for us to model it accurately. So we’re just going to put it out there and see what happens.

We won’t be charging members hourly or by distance members for rides with on-demand drivers, for example, so we have to be careful how we structure the service so we’re profitable enough to stay in business and grow with our members. We’re aiming to keep the monthly cost for most members in the same range as a traditional monthly car payment + insurance which averages around $400 per month.

There will be other entry level membership options that provide a similar but less robust level of service for the occasional user. Our beta over the next few months will have a big influence over what level of service is available to each level of membership as we test theories on how people will use the system.