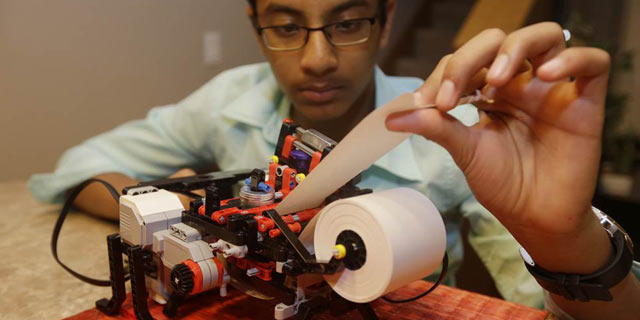 13-year-old Shubham Banerjee is launching his own startup that helps the visually impaired, called Braigo Labs. Not many people can say that their school project is worthy of becoming a business, or even able to raise money, but the California eighth-grader did that exactly. He developed a low-cost machine to print Braille, the tactile writing system for the visually impaired, with a LEGO robotics kit as a school science fair project. It got the attention of tech giant Intel Corp. who recently invested in his startup for an undisclosed amount.

The idea came to Shubham when he did some online research and was shocked to learn that Braille printers, also called embossers, cost at least $2,000 — too expensive for most blind readers, especially in developing countries.

“I just thought that price should not be there. I know that there is a simpler way to do this,” said Shubham to the Associated Press. “My end goal would probably be having most of the blind people using my Braille printer.”

Shubham's goal is to develop a desktop Braille printer that costs around $350 and weighs just a few pounds, compared with current models that can weigh more than 20 pounds. The machine could be used to print Braille reading materials on paper, using raised dots instead of ink, from a personal computer or electronic device.

An affordable printer would allow the visually impaired readers to print out letters, household labels, shopping lists, and short reading materials on paper in Braille, said Lisamaria Martinez, community services director at the San Francisco Lighthouse for the Blind, a nonprofit center that serves the visually impaired and prints Braille materials for public agencies.

Braigo Labs launched last summer with an initial $35,000 investment from his dad. Shubham used the money to build a more sophisticated version of his LEGO-based printer using an off-the-shelf desktop printer and a newly released Intel computer chip. The new model, Braigo 2.0, can translate electronic text into Braille before printing. Braigo Labs is using the money to hire professional engineers and advisers to help design and build Braille printers based on Shubham's ideas.