EveryBlock, a hyper-local news feed service, has announced its first major redesign that not only changed the look of the site, but also its focus.  Rather than remaining a news feed only, they have shifted their focus and added a platform for discussion around neighborhood news.

We've been following EveryBlock since before it was even created, so we were really interested in their announcement.  In fact, founder Adrian Holovaty was at our first Tech Cocktail event in Chicago in July 2006.

Lately, they realized there was potential in expanding their business model, as there was no great way to communicate with your neighbors online.  They thought, “How many people become Facebook friends with their neighbors? How many people in American cities can even name more than a handful of their neighbors?”   They also realized that contributions from fellow neighbors are significantly more meaningful and useful.

Hence, the redesign.  EveryBlock now has a big “post” box at the top of all place pages (check out this example) that invites you to post a message to people nearby.  Positive community behavior is rewarded:  Each user contribution has a “thank” button next to it, and EveryBlock also built a lightweight neighborhood honors reputation system that rewards people for making contributions (based on neighbors' thanks and other factors).

They’ve streamlined the news feed a bit, too, so you can follow multiple news feeds (like at home and at work).  Now you can “follow” places so you can see all the news feeds in one spot, rather than toggling back and forth manually. 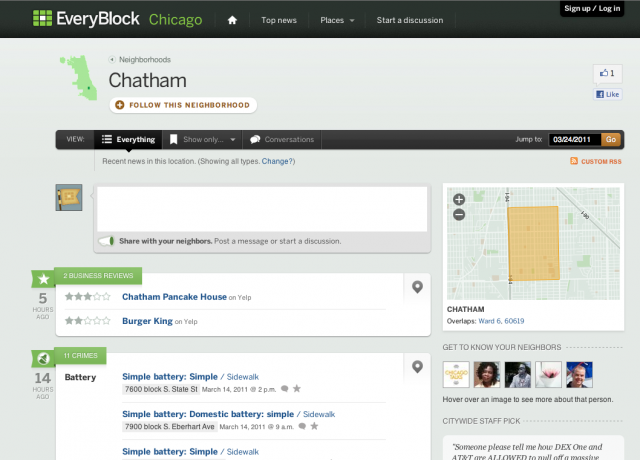 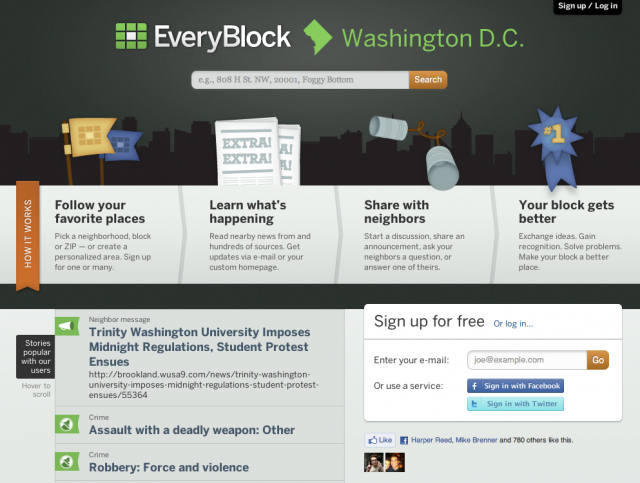 Find your neighborhood in EveryBlock