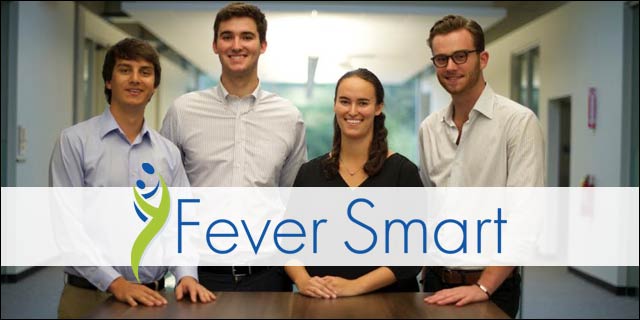 Update: As of 2 PM ET, the Fever Smart Indiegogo campaign has met 64% of its goal!

Call it wearable tech for children. Fever Smart is “is a smart wireless thermometer that allows parents to remotely monitor their children's temperature via their smartphone,” according to their website.

Typically, reading temperatures can be time-consuming for parents with young children, but Fever Smart makes the process much easier.

“I talked to my aunt and uncle and they have small children,” says Aaron Goldstein, the CEO of Fever Smart. “They like to do the one-time temperature readings, but have to set an alarm and wake up every hour in the middle of the night to take their children’s temperature and make sure they are okay.”

Fever Smart is easy to use, but unlike other wearable tech devices for children, they only focus on temperature readings. This is because they don’t want to overload parents with unnecessary information.

“Temperature is a really good early indicator that there is a health problem with their child, so we are actually making it easier for these parents so they wont get overwhelmed with all of this data,” says Goldstein.

How Does Fever Smart Work?

Fever Smart is one of the only devices of its kind that is FDA certified. Fever Smart technology includes a temperature-tracking device, a relay unit and a patch – similar to a band-aid – for the child.

“The child is sleeping and you just leave the unit on your nightstand,” says Goldstein. “The unit on the nightstand communicates with the patch under the armpit via the Bluetooth …and it sends it to the cloud over Wi-Fi.”

Fever Smart also has a few other features, here’s what you should know:

This morning, the Fever Smart Team launched a campaign on Indiegogo. Their goal is to raise $40,000. However, Goldstein says their campaign is unique because their product is “market-ready.”

Additionally, the team is launching their device and app with full integration with iOS8 and Healthkit. Fever Smart is going to be the first children’s health device on the market that will be fully integrated with Healthkit.

“Many of these products in the hardware space are in the prototype phase and won’t be ready until 15-18 months from now, but our differentiator is that we are ready to go,” says Goldstein.

The team will be using the money to fund the first round for manufacturing and getting the product to consumer stands by the end of 2014.

More about Goldstein and the Fever Smart Team

The Fever Smart team also includes William Duckworth, the CTO, Colin Hill, the CMO, Becca Goldstein, the CCO; all of the team members graduated from or attend the University of Pennsylvania. Evan Goldstein (MD) is the team’s medical adviser.

While Goldstein says the business plan and research are important, his advice for young entrepreneurs who are just getting started is simple.

“At the end of the day you just have to launch and go out there,” says Goldstein. “If you want to do it there really is no substitution for hard work. Pick something you are passionate about and love doing for 20 hours a day.”