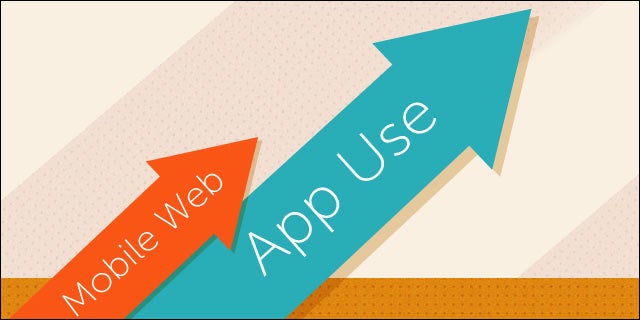 App analytics provider Flurry has released the newest data, which declares that native app usage on smartphones is continuing to grow, at the expense of the mobile web. The claim says that users as of March 2014 are spending a total of two hours and 42 minutes each day on mobile devices, compared with 2 hours and 38 minutes in March 2013. Meanwhile, mobile app usage now accounts for 2 hours and 19 minutes of that time, while mobile web usage dropped from 20% of the U.S. consumer’s time in 2013 to just 14% this past March, a decline of 22 minutes per day. The changes appear to indicate that the mobile browser has become just a single app in a deluge of new apps hitting the mobile market almost every day.

Flurry gathers its data from over 450,000 mobile applications that are installed on over a billion devices worldwide. It also uses comScore to determine figures on mobile browser usage and mobile applications. NetMarketShare is also used for the distribution of the browser usage. In other words, the company is combining data from several different sources using different methodologies, so some of the data, even though it's definitely interesting, may possibly be a bit suspect.

Flurry also examined which of the app categories remained the most popular year-over-year. Although gaming still dominates mobile usage with 32% of the time spent on iOS and Android devices, which is the same as last year, while Facebook remained second with a strong 17% of time spent on mobile.

It’s interesting, however, to note that Facebook actually exhibited a slight decline year-over-year, going from 18% to 17% in the reporting period. Although it still holds a lead by a wide margin in terms of time spent, that slight decline might help explain why Facebook has been spending exceedingly large sums to expand its user base and market share elsewhere on mobile, such as their purchase of WhatsApp.

Facebook, along with Twitter (1.5%) and Social Messaging apps (9.5%), grew to 28% of user time spent on mobile. That was up from 24% last year, which indicates the broader shift from socializing on Facebook to sharing within smaller and more private messaging applications.

New social category YouTube accounted for 4% of the time spent. Entertainment, including YouTube, and Utility apps saw their shares stay the same at 8% each, year-over-year, while productivity apps went from 2% to 4%. Flurry also notes Google and Facebook combined command less than 25% of the total time that the average U.S. consumer spends on mobile. Meanwhile, the top ten franchises, according to comScore, account for less than 40% of time spent.

The market doesn't appear to have consolidated, even with massive efforts by Google and Facebook, and new franchises are emerging in almost every sector of mobile over the past few years. These include apps like Pinterest, WhatsApp, Snapchat, Waze (acquired by Google), Spotify and more, which each account for a percentage or two of the time spent on mobile.

The app that lost the most share from 2013 to 2014 is Safari, which dropped from 12% to 5%. Non-Google and non-Apple browsers dropped from 4% to 2%. Also on decline were other categories of apps, which dropped from 6% to 3%. Time spent in native apps totalled 2 hours and 19 minutes in 2014, up 12 minutes per day (or 9.5%) from 2013, an increase that is not as notable as the previous five years, according to the report. This seems to point to a somewhat levelling off in terms of how much time users spend on devices and in apps.

Mobile ads are where it's at

Finally, Flurry reviewed mobile advertising, and cited data from eMarketer that said Facebook managed to earn 17.5% of all overall mobile ad revenues, which is essentially in line with their share of time spent on mobile. Google, including YouTube, earned 49.3%, or a lot more than their time spent. The non-Google and non-Facebook apps accounted for 65.3% of time spent, however they only saw 32% of ad revenues.According to Flurry, this represents a massive opportunity and is a KEY for mobile applications, including gaming apps, to monetize through new advertising.

Author Bio:Timm Danny I am the editor @Key Difference .Have a passionate about SEO service,technology ,email marketing services,ect..I wish to share my knowledge with others and jump into blogging.