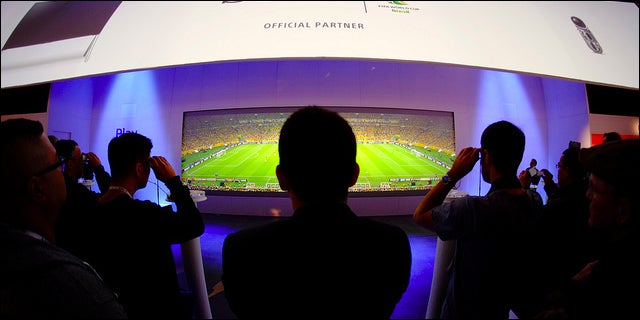 Televisions have been a staple at International CES for many years.  For most homes, they're still the focal point of the living room (and often bedrooms, sometimes kitchens, or cars, etc.), even with fewer and fewer cable subscriptions.  Smart TVs and third party devices have given us new (and better) options for getting content to our screens.

But Smart TVs are now.  As technophiles, we are constantly concerned with what's next.  According to 2014 International CES, the below 3 characteristics will dominate the future of televisions.

One major trend from this year's CES was curved displays.  Aside from standing out for being different, curved screens are said to make the viewer feel more enveloped in the program or movie (a mini-IMAX effect), cut down on glare, and improve the viewing experience for those sitting at the side of the TV.  It should be noted that not everyone agrees. Opponents challenge the claim that it improves the experience, and that curved screens reduce the “sweet spot” for viewing.  Samsung and LG have created new screens to ease these concerns with flexible screens that use a motor to alter their alter the degree of curve all the way back to a flat display.

No, it's not a Saturday morning race through the park, but instead the resolution rate for televisions of the future.  4K, also known as ultra high-definition, packs four times the number of pixels of current HD televisions.  Unlike curved displays, there is less skepticism as to the lasting power of higher resolution.  The two biggest knocks against 4K are that it's difficult to notice the difference on smaller displays, and as always, price.  However, Vizio has already announced the release of a ultraHD tv for $999.

Perhaps no surprise, but as our screens improve in resolution, connectivity, and shape (see: #1), they also continue to grow in size.  This year both Samsung and LG unveiled a 105-inch television (that's 8.75 foot-longs for those who go by International Subway Units).  At some point, the line between, in-home entertainment and bonafide movie theater will disappear, and CES will lead this ambiguous charge. For those interested in procuring a 105″ television for their home, this jumbo screen will set you back a cool $70,000.