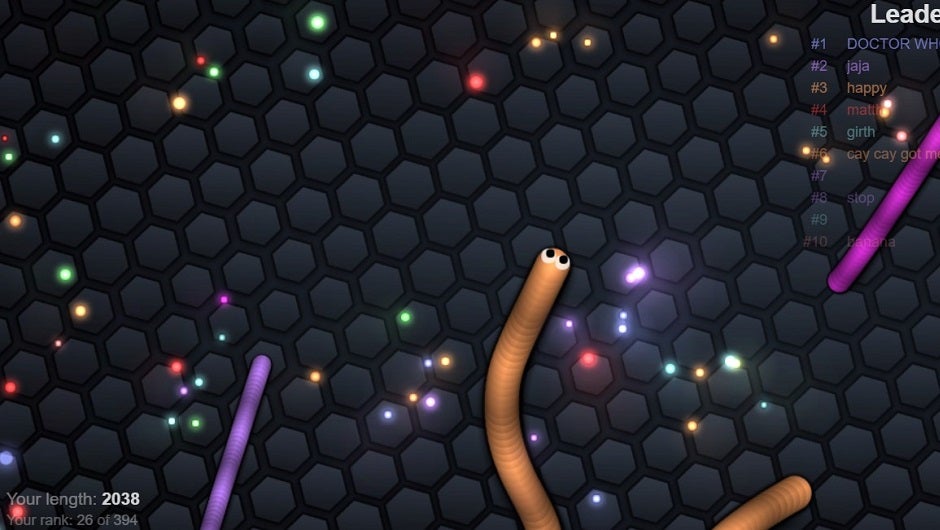 Most game developers dream of their next project going viral. Few believe that it will do so. Create a game that hits the right note with users, however, and it can suddenly be like winning the lottery.

Take 32-year-old developer Steven Howse, who only three months ago was struggling to earn a decent living. He developed the game Slither.io, and it took off practically overnight — now he earns some $100,000 every day from advertising and over 130 million users play the game on mobile and PC.

What makes a game go viral when others languish in the dark reaches of download sites? With nearly a million game apps available for download, there has to be something more than luck. At first sight, there’s nothing particularly remarkable about Slither.io. It’s what happened to it once it got in the public eye that is of the most interest to gaming entrepreneurs.

How Slither.io Took Off

Sither.io launched at the end of March and quickly became a success, primarily via word of mouth. Once it became well known on gaming review sites with large numbers of followers, it was only a matter of time before it went viral. The problem it created for designer Steven Howse was in making sure the game and the server could cope with the sudden, meteoric rise in demand. Initially, the game would kick players out when the server overstepped its capacity and finding fresh capacity became a major challenge.

Howse is self-taught and had only written the programs for a few games before he hit the jackpot. For aspiring entrepreneurs and game developers out there, there’s plenty in the Slther.io story to get excited about.

Howse’s game had all this: It's simple, free to use and addictive. If you want your game to go ballistic on the internet, then you need all these qualities.

Who can say why a particular video or game will go viral? For Howse and his Slither.io game, it may have been a mix of all the above reasons. By the time he had spent six months developing the game and finally uploaded it to Apple and Android platforms, he had little or no budget for marketing.

Going viral is the dream of every game maker but it’s difficult to gauge what is going to capture the imagination of users and how best to market it. As far as Howse was concerned, the Slither.io game had a pretty big slice of luck: It got a big helping hand from one particularly well-known game addict.

The greatest promotional tool that any entrepreneur wants access to is word of mouth. Once people start talking about you, then your chances of gaining visibility increases dramatically.

For Howse, this happened when people on Alphabet YouTube began posting videos of themselves playing Slither.io – one in particular, PewDiePie, had 47 million followers. It’s hard to say how the game would have fared had this not happened: It gave Slither.io a huge boost. Howse didn’t go seeking this kind of endorsement, but it began a massive explosion that saw him earning $100,000 a day from advertising alone. When you understand that each click on an advert yields just a few cents, the number of people playing the game is massive.

The key for entrepreneurs who create a new game and want it to have the same success is to get game ambassadors involved. People began to use Slither.io because they knew PewDiePie and trusted his reviews. The addictiveness of the game did the rest.

In all forms of marketing, getting brand ambassadors on board is important. It’s also quite difficult to do. If you think that hundreds of new games come onto the market every week, getting noticed by the big players is vital. The key to this is identifying the popular gamers and finding where they hang out. Of course, it doesn’t have to be one large player who has millions of followers – smaller brand ambassadors, carefully selected, can do just as good a job.

How to Handle Success

The other key factor that all gaming entrepreneurs have to think about: What to do if the app suddenly takes off. Howse had to fight hard to make sure there was enough server space to cope with demand, and one suspects that it caused a good deal of stress just keeping up with the initial explosion. If you don’t want your game to suffer the same challenges, then you need to have your infrastructure plan in place. That doesn’t mean investing in extra servers and wasting money on a project that’s not going to lift off the ground, but you need to know where to look for resources and have an idea how you are going to fund it (Howse was spending some $15,000 a month on servers at one point).

In no other industry is there the potential to have overnight success like this. It is like winning the lottery. Even if you are slightly pessimistic, make sure you have a contingency plan in place and have done your research so that you are better able to cope with any surge in popularity.

Slither.io is a great story for all game developers. A guy, down on his luck, a self-taught programmer, working for six months on a game, puts it up online. He’s thinking about getting a ‘proper job’, and suddenly the game goes ballistic. He’s a gaming superstar overnight. The money rolls in. As always in life, gaming success on this level only happens to the chosen few. That doesn’t mean it can’t be you.

If you have a great game idea and can get it developed, the next success story could be yours.

Originally belongs to a small town of India found my passion for tech in teenage when I met my PlayStation. Time turned a gaming geek into a professional blogger, I have spent 3 years writing for various websites like-Aadhaar Card Play store  geometry dash