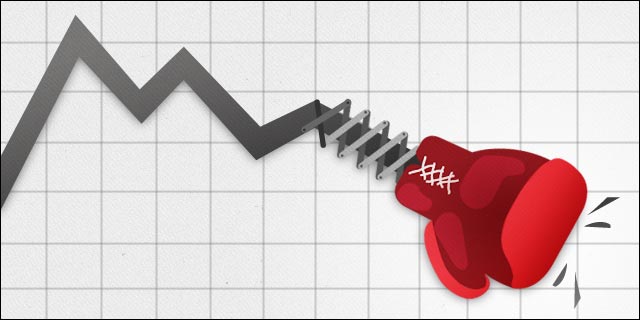 Suppose your company has 8 million shares outstanding and you’re fortunate enough to be able to raise $4 million at an $8 million pre-money valuation in your Series A. That’s a $12 million post-money valuation and each share is valued at $1.00. You continue to own 8 million shares after the financing, but you issue 4 million new shares to the investors, thus you now own 8M/12M or 67 percent of your company and you have $4 million in the bank.

To raise the money, you told the investors that within 12 months you’d have revenue of $1 million per year (this in an arbitrary milestone…any milestone will work in this example).

As time rolls by, it becomes apparent that you’re not going to hit the milestone. By month 11 you realize that it will take at least six more months and you’ll need $2 million more to achieve the revenue goal. Now you have to get your investors to give you another $2 million.

Because you’re behind schedule, the investors will look back and say, “We all agreed that the company would be worth $12 million when you hit your milestone. Since you need $6 million to achieve that instead of $4 million, the real pre-money valuation should be reset to $6 million.” That would make each share worth $.75 ($6 million valuation / 8 million shares outstanding). They invest another $2 million (Series A-1). The new $2 million buys 2.67 million new shares ($2,000,000/$0.75).

If your investors had a full-ratchet anti-dilution protection, then they would retroactively get issued another 1.333 million shares ($4 million investment / $0.75/share = 5,333,333 shares) because you sold shares at a lower price than what they paid, and they get new shares issued retroactively as though they had originally paid the lower price. Although full-ratchets aren’t entirely common, in this example since the reset is occurring in the same round, I’m quite sure the price that the investors’ paid would get reset.

After the Series A-1 there are 16 million shares outstanding (8M (founders) + 4M (Series A) + 2.67M (Series A-1) + 1.33K (adjustment)), @ $0.75/share. The post money valuation is still $12 million. You still own 8 million shares but they are now worth $6 million instead of the $8 million that they were worth before. The valuation of your company hasn’t changed, but the value of your stock went down by 25 percent, and you own 8M/16M or 50 percent of the company instead of 67 percent. Let’s hope that you now make your milestone, and if you need to raise a Series B it’s at a higher valuation so you can get out of this cycle of destruction.

Reality would probably be worse too, because if you’d hired anyone in the meantime and issued shares out of your option pool, professional investors would ask you to replenish the option pool. And if your investors had preferred shares (or participating preferred shares), the exit value has to be even higher before the founders see a penny due to liquidation preferences. Meantime the preferred shares are accruing interest, so the extra time is costing you as well.

In other words, a down round doesn’t hit all of the investors equally. In this case, the entirety of the miss was taken out of the hide of the founders. You went into fundraising mode expecting to maintain 67 percent of your company, but because of a problem with execution, wound up with 50 percent. If the miss had been bigger (i.e., if you had needed more money in Series A-1) or had occurred later in your development with more preceding rounds, then the reset would be even larger.

The moral of the story: Missing your milestones can cost you dearly. Taking venture capital can be great when everything goes well, but it can be excruciating when it doesn’t.