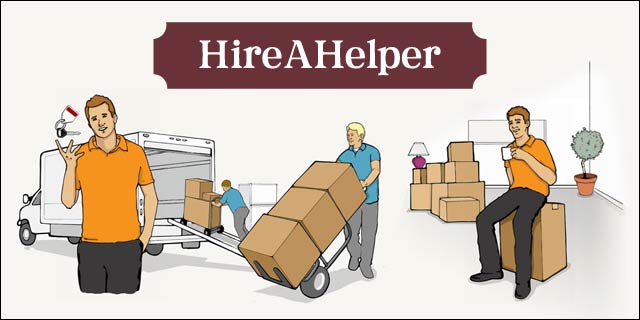 HireAHelper cofounder Mike Glanz was sitting in Carl’s Jr. when UHaul served him a lawsuit: a giant stack of papers that would determine his fate for the next three years.

“It was unreal at first. It was almost a proud moment – look at how well we’ve done that they think they need to sue us,” recalls Glanz. “We had a couple of lawyer friends who said they’re just going to settle.”

But it quickly became clear that the lawyers were wrong. UHaul filed a handful of claims against HireAHelper, including for infringing their trademark on “moving help” and stealing trade secrets (they would never divulge exactly which ones – only the lawyers were allowed to know). UHaul has a marketplace for people to load and unload UHauls, and HireAHelper's marketplace for moving labor posed a threat.

“After two or three months, it became really, really obvious that they had no interest in settling. They had interest in putting us out of business,” Glanz told the Business in the Morning podcast. The lawyers said UHaul wouldn’t win these claims, but they could draw out the process until HireAHelper had no money left.

Before the lawsuit, Glanz’s parents had taken out a second mortgage on their house that became part of the original funding for HireAHelper. Now, that money – the largest loan his parents had ever taken out, which was going to delay their retirement for 10 years – was going toward thousands of dollars a month in legal fees.

And even if HireAHelper had wanted to give up, they couldn’t have. Glanz learned that if UHaul won, his personal earnings could be impounded forever, haunting him for the rest of his life.

“That was the part that was hard – thinking that this decision . . . could potentially ruin the rest of our lives,” says Glanz. “They were going for blood, and so we had no choice but to fight.”

Between court dates, Glanz and his cofounder Pete Johnson did everything they could to grow the business. To make money, they both split their days into two shifts: Glanz did software consulting from 6 am to 2 pm while Johnson worked on HireAHelper, then they switched and Johnson headed to the casinos to play poker. At the end of the month, they split their earnings and managed to stay alive.

When there was legal research to be done, the cofounders and a few employees recruited their spouses and pored over documents themselves, to save money paying a paralegal.

“It’s easy to stay motivated at first, but 36 months is a long time,” says Glanz. “Every little win on every little injunction or motion that UHaul filed only had the tiniest little respite from the despair.”

It’s hard enough to get a startup off the ground and start making revenue, but HireAHelper had a huge handicap: monthly legal fees for the foreseeable future, sunk into something that didn’t bring their business any closer to success. Johnson eventually moved in with Glanz and his wife, but they still often had no money.

“I remember sitting in the shower in the morning and dreading going to these 12-hour days of work, and feeling like I was working towards nothing, because we could lose everything at any second. The only feeling I could describe it as is despair,” says Glanz. “At the time, I regretted [starting the company] every single day.”

One of the worst realizations came when Glanz was in the hospital, waiting for his wife to give birth to their daughter. “I remember sitting in the delivery room and what I remember of that incredible experience was just being stressed about that lawsuit and ‘What am I doing to be having a kid?' We were about to lose everything. There was no point in those three years where we weren’t one week away from going out of business, we weren’t one small decision away from losing everything,” he told Business in the Morning.

After 36 months, there was no triumphant win; the case simply settled, on similar terms HireAHelper would have settled for initially, after they had lost over $250,000 in legal fees.

Six years later, instead of wallowing in bitterness toward UHaul, Glanz tries to focus on the ways the lawsuit made them stronger. For one, they’re incredibly good at managing money and figuring out what to focus on to grow the business. “You can’t let the good old boys dictate what you can and can’t do,” he says.

(But UHaul doesn't see this as a “David and Goliath” situation. “At no time was this matter anything other than our attempt to get Mr. Glanz and HireAHelper to cease upon infringing on our proprietary technology,” says Sebastien Reyes, director of external communications for UHaul. “Sadly, Michael Glanz is an intellectual property thief.  He signed up to provide moving services with MovingHelp.com under false pretenses to gain access to the inner workings of our patented processes and backend systems. He subsequently used this information to make a knockoff of the MovingHelp.com marketplace system. When he refused to stop, MovingHelp.com was left with no choice but to sue, and Mr. Glanz and HireAHelper conceded MovingHelp.com's ownership of trademarks, copyrights and trade secrets.”)

HireAHelper has now done over $22 million in sales – $10 million in the past year –  and grown to over 20 employees. They have over 10,000 helpers on their platform who have helped 100,000 people move. They can boast that moving with HireAHelper is 10 times safer than a full-service move (where the movers and the truck come from the same company), and 60-70% cheaper.

Glanz reflects, “If we had known we were going to get sued, we would never have started the company. I would have never grown or learned as much as we did at the time. You have to just take the problems as they come. You can’t try and plan for them. You just do the best you can.”