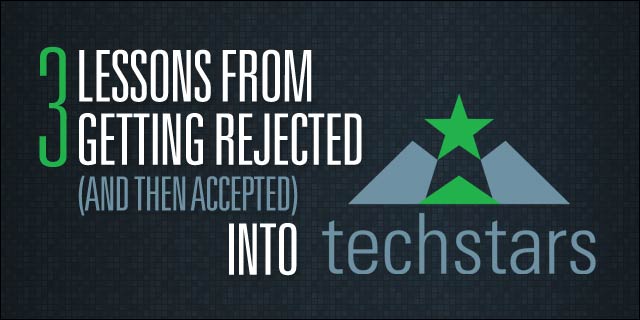 Early in 2013, my cofounders and I decided to apply to several of the top startup accelerators in the US, including Techstars Chicago, which eventually accepted us into their summer 2014 session. When we started the application process, we had no idea if we were ready, but as an academic-focused startup, we prepared as best as we knew how – we studied up.

We spent hours upon hours reading blogs and articles, watching countless videos. In a few weeks, we were drastically more fluent and knowledgeable in “startup theory,” and what successful startups were doing right. We delved so deep that it was to the point that we felt a close personal connection with some “startup celebrities.”

Once we immersed ourselves in accelerator applications (and Taco Bell), we dedicated time to coming up with what we thought were strong responses to likely objections to our business model. We spent sleepless nights and weekends just making our scripted video intros look natural. The list goes on.

These endless hours of practice and preparation had left us well equipped, and we were surprised to find ourselves in the final round of interviews for many of these programs. Here are the three biggest lessons that we’ve learned along the way.

Similar to the startup ethos of launching early, there are three main benefits to applying to accelerator programs early as well.

With each passing interview, the confidence in our idea and our preparation soared. We went from being surprised we had gotten this far, to being disappointed we didn’t get in. However, it wasn’t until much later that we figured out that some of our “strong answers” were likely what hurt us the most.

Like all startups, parts of our idea needed work, but instead of owning up to it or to not knowing certain parts, we thought our job was to defend it incessantly and seem like we had it all figured out. Confidence doesn’t compensate for weakness, and the sharks you will encounter in the final interviews can sniff it out like blood.

Applying early allowed us to identify this and have several tries at finding the right answer, instead of a “strong answer.”

Because of its heavy emphasis on mentorship, the Techstars process requires founders to be coachable, which requires intellectual honesty and transparency. I believe this also extends to all great mentors (and investors), and that you won’t make a lot of progress without it.

This year, this lesson finally clicked with us. We got to the Techstars final interview again, but this time, true to startup theory, we A/B tested our approach. Rather than trying to have answers to everything, we highlighted our strengths while being very upfront about our weaknesses.

It worked. Sure, our product and ideas were more mature and scalable, but being much more upfront about our weaknesses helped tackle what may had been the main objection working against us.

In retrospect, our defense of the bad parts of our idea must have scared the hell out of the Techstars guys.

3. Accepting that “your baby is ugly” is essential

Building off my previous point, being able to admit that your startup isn’t perfect allows you to operate in true search mode. When you are open to feedback, people are more willing to give it to you and, in turn, they often become emotionally invested in helping you succeed. It might be counterintuitive, but being able to accept and admit that your company could use some work will take you far in the long run. As part of Techstars Chicago, we’re so honored to be working with the amazing staff and mentors here. We’re also continuing to learn from our users and are on the path to iterating our way to building a great company.

Marcio is the CEO of Clutch Prep, a Miami, FL startup that makes the best video tutorials online. Clutch helps college students learn and excel with in-depth, textbook-specific videos. Clutch is a Techstars Chicago 2014 company. Visit them at www.clutchprep.com.