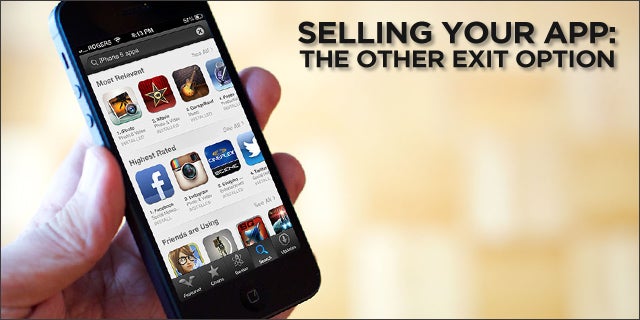 As of last July, around 60 percent of the apps in the iOS app store had gotten a whopping zero downloads, claimed analytics company Appeven. Around the same time, Canalys estimated that two-thirds of apps in leading app store catalogs receive less than 1,000 downloads in their first year.

Beneath the top 10 lists and featured apps, there’s a graveyard of apps with few downloads, that haven’t been updated in months or years, linking to websites that are no longer functional.

Perhaps we could avoid the app wasteland if more entrepreneurs considered a third exit option: not get acquired or IPO, but just sell your app.

Unlike a traditional acquisition, app acquisitions include the code and not the business or team. Company might want to buy your app to refurbish and remarket it, or simply to cut down on development time for their own app.

Even if your app isn’t a flop, selling it can be an easy way to make money. This option is especially attractive to hobbyist developers who never intended to create a business. According to Ziipa founder Lee Starusta, apps can sell for hundreds, thousands, or even millions of dollars.

“Many developers have not even thought about doing that,” says Starusta. “It’s not as obvious, and there’s got to be more awareness.”

One of the market leaders is Apptopia, which has handled over $1.3 million in app sales. You can list your apps for $29, plus a 15 percent commission or $150 (whichever is higher). Flippa is a marketplace for selling websites, with similar fees: $29 plus a 5 percent commission (up to $2,000) for websites older than a few weeks.

Last week, Ziipa added app acquisitions to its app discovery site, which already lists over 16,000 websites and apps. For $19.99 per year, you can sell your app with no commission (the payment is handled by you and the buyer). Although Ziipa curates their marketplace, their approach is caveat emptor (buyer beware) until they start doing more detailed assessments of apps.

If you want to sell your app – none have been listed so far – head over to Ziipa and submit it to the marketplace. If your app is already in their database, claim it and mark it for sale – and maybe it will get a second life.