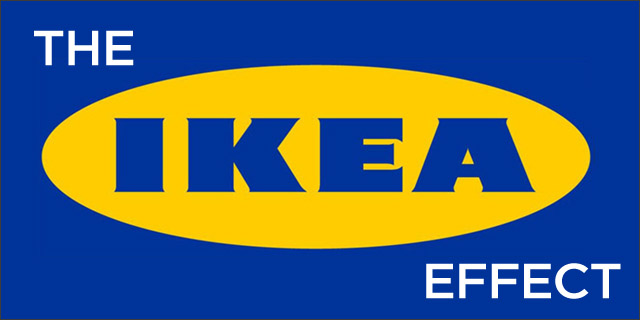 In a TEDx talk called “What makes us feel good about work?,” behavioral economist and psychology professor Dan Ariely tells a story about the “Ikea effect.”

The Ikea effect refers to the confusing fact that an hour spent putting together pine boards and screws and bolts makes you like a questionably stable piece of furniture a little bit better. It’s the reason that cake mixes failed when they were “just add water,” but succeeded when the manufacturers removed the powdered milk and eggs: people value things they put more work into.

That’s the positive side; on the negative side, we tend to overvalue the things we ourselves have created.

In an experiment involving very simple origami, Ariely found that people who build an origami figure (“builders”) are willing to pay more for that origami than random strangers (“evaluators”). They place a higher value on the origami they’ve created. Not only that, but they think everyone will place a high value on it.

When the task is even harder – when the builders don’t get proper instructions and their origami turns out uglier – they value it even more, while the evaluators value it even less. 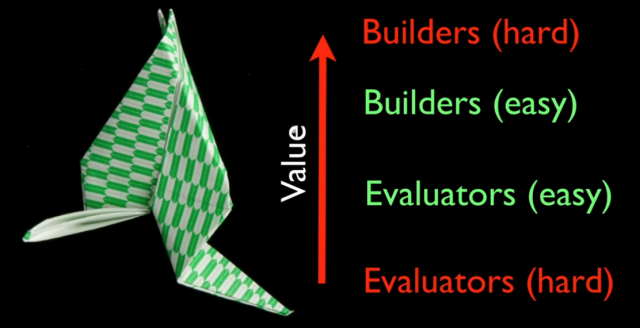 The lesson here is a simple one: your product isn’t as valuable as you think. Be careful of taking the builder’s perspective when pricing your product, factoring in all the work and long hours and struggles that went into producing it. Good entrepreneurs know they should take the customer’s point a view – a point of view that rarely knows or cares about all that effort. Instead, customers care about the value provided to them – and a crinkled piece of colored paper doesn’t provide much. The Ikea effect is why talking to customers is so crucial, particularly about pricing.

The rest of the TEDx talk has some valuable insights about recognizing your employees’ effort and keeping them motivated, but the section about the Ikea effect starts at 12:48.