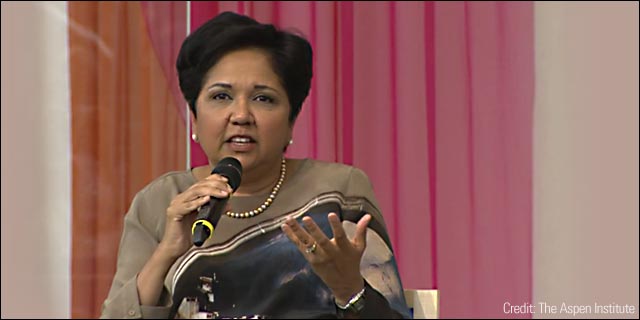 PepsiCo CEO Indra Nooyi recently told The Atlantic, with rare honesty and a lot of laughter, that women can’t have it all.

“You die with guilt. You just die with guilt. My observation is that the biological clock and the career clock are in total conflict with each other. Total, complete conflict. When you have to have kids you have to build your career. Just as you're rising to middle management your kids need you because they're teenagers,” said Nooyi. “We’re screwed.”

“If you ask our daughters, I'm not sure they will say that I've been a good mom. I'm not sure,” she said.

Nooyi gives a lot of credit to her support system, including her parents, her husband’s parents, and her staff. For example, she trained her secretary to be a stand-in parent.

“When I'm in PepsiCo I travel a lot, and when my kids were tiny, especially my second one, we had strict rules on playing Nintendo. She'd call the office, and she didn't care if I was in China, Japan, India, wherever. She'd call the office, the receptionist would pick up the phone, ‘Can I speak to my mommy?’ Everybody knows if somebody says, ‘Can I speak to mommy?' It's my daughter. So she'd say, ‘Yes, Tyra, what can I do for you?’

‘I want to play Nintendo.’

So she has a set of questions. ‘Have you finished your homework?” Etc. I say this because that's what it takes. She goes through the questions and she says, ‘Okay, you can play Nintendo half an hour.’ Then she leaves me a message. ‘Tyra called at 5. This is the sequence of questions I went through. I've given her permission.’ So it's seamless parenting.”

Here’s what women executives and founders have to say about Nooyi’s comments:

“Her response was depressing. She validated the stereotypical role of men vs. women in the home without turning it into a teachable moment. (With her media training, she had the perfect opportunity to do so.) Perhaps she was trying to show that she is a “real person,” instead she upheld the ‘time = quality' equation. Being around your child all the time isn't a direct link to what is considered being a good parent. Believe me, we all wish there were 36 hours in a day. It's how you spend them that counts.”

– Jennifer Hill, cofounder and CEO of Sixty Vocab, mother of a 21-month-old and pregnant

“To me, her comments were seeped in negativity. Is it inspiring to tell other women ‘you can't do it'? If I were reading that when I was trying to make a decision about whether to stay in the workforce after having children, it would be extremely disheartening. Why tell women they can't when there are many ways they can? In order for anyone – men or women – to achieve work/life balance, we need to take responsibility for managing our time and setting limits.”

“There are many successful entrepreneurs who own businesses and/or are in high-level positions and who have it all, including a family. For instance, take Diane Sawyer, Martha Stewart, Estee Lauder, Ruth Hamdler, Debbi Fields, and Arianna Huffington, to name a few, who work harder than most and are living proof that you can have it all. . . . Therefore, I think Indra Nooyi's comments are based on her experiences and she shouldn't make broad statements about all women in the workforce who have children. I'm certain the many ladies I listed above, along with the thousands of others, would disagree with her.”

– MJ Pedone, president and founder of Indra Public Relations, mother of a four-year-old

“Can women have it all – have a family and still have the career they want? I think so. I may be naive, but I think they can. I want to nurse my kid and raise him or her. But I also want to grow and scale Share Some Style. Priorities will change. . . . But like I said, I'm 31. I don't have teenagers. I don't travel for work. I'm not the CEO of PepsiCo. I admire Indra for being so honest. Every woman, every person is different. Right now, in my situation and in my life – I DO feel like I can have it all. Ask me in a couple years and I may have a different answer!”

– Diane Loviglio, cofounder and CEO of Share Some Style, due in three weeks

It’s not about “having it all”

“The real problem with her comments is the fact that anyone is expecting women to do it all. This certainly isn't expected of men. My mother was a stay-at-home mom until she divorced my dad. Then, she went to work, and I became a latchkey kid. She wasn't made to feel guilty because she didn't have the time to volunteer weekly at my school or cook organic meals each night for us. She worked, and I came home to an empty house every afternoon. It was much more matter-of-fact than it is now. Women may have higher ranking positions now than in past generations, but the expectations for women have completely become unrealistic. We're expected to be business owners, look like super models, run triathlons, cook gourmet meals, volunteer in our kids' schools, and have perfectly maintained homes. C'mon!”

“The real issue is still the societal pressures women face, which need to change first. We ask for equal rights in the workforce but what women should ask society for is acceptance for equal help in the home.”

“[Indra’s comments] made me sad. As mothers, we're in a unique place to our children. There are no other people in the entire world that have the same relationship to our children that we do. If we don't parent them in a way that makes them know they are undeniably the most special people in the world to us, then we're setting an example to them to think that money and power are the most important things to strive for – not relationships.”

“Things happen – sometimes your kids are disappointed, your husband is disappointed, employees and clients are disappointed, and it's all on YOU. There’s no glory in that and it can be a lot of pressure. But, I think the most important thing is that my daughters see their mom going strong, overcoming adversity, loving her work, and still managing to occasionally cook them a healthy meal and make sure their clothes are clean! Hopefully, that will stick with them, and they will know that happiness in life comes in many forms.”

“Yes – woman can't have it all – but neither can men. No one spends 100% of their full potential on any one activity and if they do, they aren't leading a very full or interesting life. We all compromise, set priorities, cope, and rely on others to get things done at work or at home. There is sometimes a misconception that very successful people are perfectionists and control freaks. But by definition, when you have a lot things going on, you need to learn to let go of some of the details and extend trust to others – be it your spouse, your kids, your team, or the wider world.”

“It's ironic that Brenda Barnes, former Pepsi CEO, was asked this same question right after she resigned for family reasons. I heard her speak several years ago at her alma mater, Augustana College. What she said has stayed with me – a wife, mom of three young men, entrepreneur, college instructor, former first lady, and community volunteer on numerous boards. She said, ‘Ladies, you CAN have it all. You just can't have it all at once.' True, isn't it?”

“I hate what she said! I hate to admit that she's right. I LOVE that she voiced what many executive moms think. She squashes any piece of utopia I was holding on to! While I'd love to say women have a lot to balance, I think any parent that is an executive of a company has a hard time balancing it all. . . . No matter which path I would have taken, though (to be mom only or CEO mom), a part of me would still die with guilt.”

“I loved her comments. I think Indra Nooyi was so brutally refreshing and honest in her interview with The Atlantic. I also do not think women can have it all, and it becomes debilitating – mentally, physically, and emotionally – when you even try. As a mother and startup founder, you end up feeling like a ‘B' at home and at work, but I think the only way you can keep your head above water is with a massive support system.”

“I agree wholeheartedly with Ms. Nooyi's comments. There are only so many hours in the day and life ultimately has to be about priorities and choices. The belief that women can fulfill every role from the perfect mother to the revered business leader is an unrealistic expectation. Indra Nooyi is not saying anything that should be perceived as abrasive but it may come off that way. This is due to the fact that Western feminist culture likes to believe that the modern-day woman should not be limited or constrained. However, the fact of the matter is that time is a scarce resource and the tenet that ‘women can have it all' belies the reality that no one can be everything to everyone.”

“Absolutely! She is completely right – balance is an illusion, and juggling guilt is as important as juggling a calendar if you want to keep going and not give up. The only way for women to contribute to society to the degree they are capable is to have more permission for men to stay at home, support, and balance the way we do.”

“I completely agree with Indra's comments. You cannot have it all, no one can. With every choice, you sacrifice something, and that's ok. In the end, you have to answer for the choices you've made. Make sure you are happy with them – I am.”