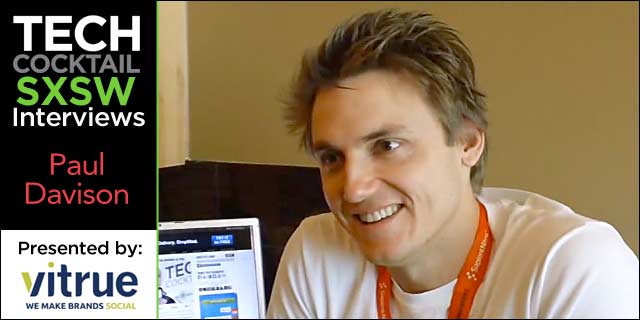 Who won SXSW?  The question is almost as silly as it is inevitable.  Every year, we use the Austin-based technology conference to gauge what the next big thing is going to be.

If forced to choose who won SXSW 2012, however, undoubtedly Highlight would have to be the answer.

And in sitting down with the social discovery app's founder and CEO, Paul Davison, the answer for how this two man operation became the darling of this year's interactive in less than two months since their launch (January 24th) became a lot more clear.  Davison's energy and passion for this new emerging space was both palpable and infectious.

We  had the opportunity to sit down with Davison (at the Tech Cocktail SXSW top-secret headquarters) and pick his brain about all things Highlight.  Look for the full interview to be released early next week.

An interview with Highlight's founder and CEO, Paul Davison

Part 1: An introduction to Highlight, the inspiration behind its creation, and some of Paul's favorite early use case studies.

Part 2: Why is there such a large influx of social discovery apps now?

Part 3: What will it take for Highlight to distance itself from the competition?

Part 4: Why is Facebook currently Highlight's only login service?  What changes can we expect in the coming months?

Part 5: How do you manage the increasing expectations?

Part 6: Can you address the issue of Highlight's high drain on battery life?

Part 8: What's your top piece of advice for aspiring entrepreneurs?