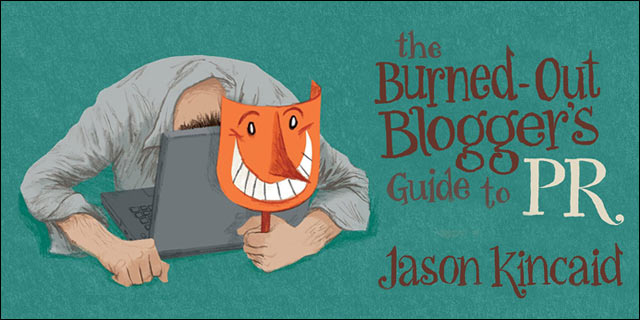 Then-TechCrunch writer Jason Kincaid was attending a press event in San Francisco, frantically trying to finish his story before the embargo lifted. When someone from the company came over to ask how things were going, he blurted out: “I hate you.”

That cruelty may have been the moment he burned out.

Tech reporters may be admired, but the job can involve lots of long days, frantic writing, and getting paid way less than the PR people who annoy you, Kincaid recounts in The Burned Out Blogger’s Guide to PR. The job that was once exciting loses some of its luster.

More than a how-to guide, Kincaid’s book is a peek inside the tech reporter’s brain. Here’s what you’ll find if you poke around:

After seeing thousands of pitches, interviewing hundreds of entrepreneurs, and witnessing hot startups fail, the next “next big thing” is less enticing. “The tragedy of tech reporters is that they inevitably grow numb to the spark of innovation that got them involved in the first place,” Kincaid writes. Suddenly, everything seems like an imitation, an incremental improvement, or just another photo-sharing app.

If you want to get noticed, you have to write your pitch assuming the reporter couldn’t care less.

Because an article in the press is so valued, reporters suddenly become the ones to suck up to. “Many [PR people and entrepreneurs] veer into an uncanny valley where the smiles are too wide, the compliments too calculated,” Kincaid writes. Every LinkedIn request, tweet, or email that’s “not a pitch” is looked at warily in case we might unknowingly rope ourselves into reading another press release. In other words, our bullshit-o-meter is incredibly high, so skip the insincerity.

With publications competing for eyeballs and advertising dollars, that means reporters are competing with each other to get the story first. “We want to win. Reporters can talk about serving the public all we want, but we’re fueled by a primal thirst for victory,” Kincaid writes.

“If one of [our] competitors has already written it and it isn’t huge, everyone-needs-to-cover-this news, then it’s effectively dead to [us].”

What does that mean to entrepreneurs? Navigating embargoes and exclusives is a delicate dance, and tripping up could be fatal.

In the pressure for pageviews and clickable headlines, many reporters lose some basic sensitivity toward hurting other people, Kincaid writes. “A callous grows.”

Beyond that, there are some reporters who are truly cruel:

“Their mission is to report the news and if it hurts your feelings along the way, well – tell it to your shrink. They live and die for the story, to disrupt the status quo, and whatever lofty mission they’ve conjured to rationalize their thirst for attention. Anything they hear you say is fair game. They’ll twist quotes and strip context in ways that would make reality TV producers jealous. They’ll lie and tell half truths. They’ll forget to mention they’re a reporter. They’ll badger you with questions when you’re drunk. They’ll call up past coworkers until they find someone willing to say something nasty about you, and refer to them as a ‘source who worked closely with you in the past,'” Kincaid writes. “Reporters can be tremendous assholes who believe they can invade privacy and shrug empathy because they belong to the high-and-mighty institution of the Press.”

Needless to say, steer clear of these specimens if you can – but be prepared for the crisis that could blow up if you don’t.