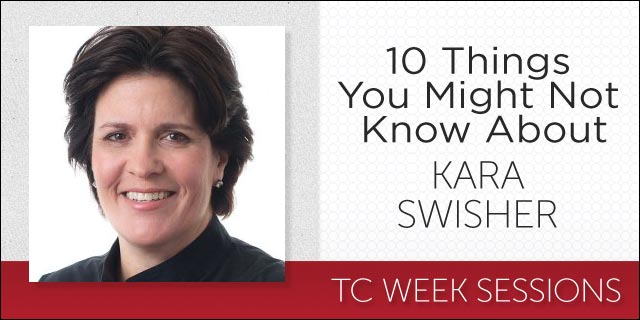 The incredibly intelligent and witty Kara Swisher, the former co-executive editor of AllThingsD and now co-executive editor of Re/code, joined us for a fireside chat at TCWEEK last night. She had lots of advice and perspective to offer about the future of technology and media, but she also shared a few personal tidbits along the way. Here are some things you might not know about the veteran tech journalist.

1. Swisher first got hired at the Washington Post when she called up metro editor Larry Kramer (now the publisher of USA Today) and yelled at him. She was writing for the Georgetown University student newspaper, and discovered that a Post story was full of factual errors and typos. “I basically called him an idiot and I said, ‘How dare you? (blah blah blah) This is terrible, it’s the Washington Post,’” Swisher says. Kramer challenged her to come in and tell that to his face, so she did and he hired her as a freelancer covering Georgetown.

2. Swisher has a cameo coming up in the HBO show Silicon Valley, where she tells off an entrepreneur for using buzzwords.

3. Swisher met Meg Whitman, the CEO of HP, before she was hired as CEO of eBay. “She called me and said, ‘I hear you know about this Internet’ and ‘Should I take this job?’ and I was like, ‘Well, you could make some money, I guess,’” Swisher recalls.

5. Steve Jobs had a hard time warming up to Swisher, preferring to interact with her colleague Walt Mossberg. “For a couple years, he’s like, ‘Who’s this snarky girl sitting next to [Mossberg]?” Swisher explains. “He knew who I was, but he was like, ‘She’s irritating me now because she’s asking irritating questions.'” Years later, at an event for iTunes Ping, Mossberg was away in Paris on vacation and Jobs had to talk to Swisher. When he asked about Ping, she blatantly told him that it “sucked.” She also told him that Mossberg was successfully writing articles on his iPad (without a laptop), which was annoying his wife. “I’ll never forget this – [Jobs] goes, ‘I can turn it off,’” Swisher recounts. “After that, we had a good relationship.”

7. Swisher, who’s been married a long time, wanted to check out Tinder and didn’t realize she was actually live on the site. “I was laughing about who I was getting matched up with – it was like 18-year-old girls from Berkeley and old ladies from Oakland, and an occasional dude who looked like a lady,” she says. “I realized oh my God, I’m really on Tinder, I’m dating right now. And then I realized oh my God, I’m too famous for Tinder. I’m famously married, so I’m really too famous for Tinder!”

8. Swisher is relentless, a quality she admires in entrepreneurs. “I want to win a lot. I don’t want to just win, I want to beat the people into the ground. I’m really competitive, and I’ve always been competitive as a reporter,” she says. “I wouldn’t say I’m shy.”

9. Swisher has two boys, ages 9 and 12, and she jokes about helping her 12-year-old text girls (being the writer, of course).

10. Swisher’s birthday on Wikipedia is May 9 – today – but it’s actually wrong. “I have a birthday every month, it’s great,” she jokes. “I put fake birthdays all over the Internet.”