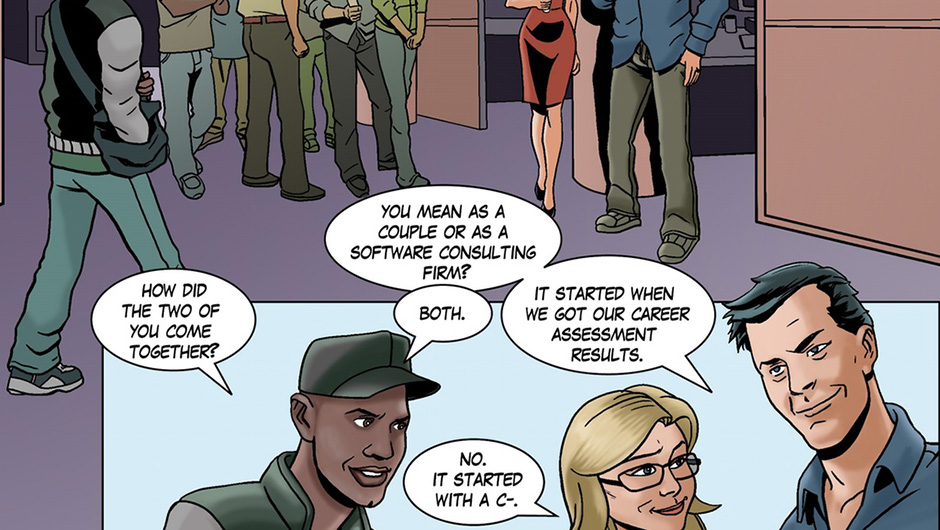 A lot of middle school and high school-aged kids read comic books. A lot of middle school and high school-aged kids also have no idea what they want to do when they grow up. What do these two things have to do with each other? Don't worry, I'm getting there… Now, I by no mean think kids have to have their careers figured out by the time they graduate high school, but I suppose it never hurts to start introducing them to the possibilities that are out there. Some of most lucrative and rewarding possibilities lie in the STEM (Science, Technology, Engineering, Math) fields, but the US isn't exactly known for having the best education in these areas, and the paths to some of these careers can seem daunting and confusing.

Paris Gamble, a father of two with an engineering and science background has created a Kickstarter Campaign for a comic book called “David, Software Engineer”.  The goals is to get kids excited about STEM careers, and have them thinking about the steps necessary to be successful in these fields.

“I’ve wanted to bring the STEM careers message to kids through comics for a long time. I grew up as a math and science guy that loved comics and my dad taught me to read using comics. I know for a fact that comics work! Now that I have two children of my own I’ve worked to get my own kids interested in STEM. I did not find the existing materials to be very engaging. I am convinced that comics are a better way to getting this information into the hands of kids.”

Paris's ultimate goal is to create an entire series of STEM Career Comic Books. Possibilities for future issues include an aerospace engineer, an architect, a cellular biologist, a marine scientist, and a nuclear engineer.

Along with the actual comic book, Paris has also created guides for students, parents, and teachers. He thinks the comic books would make great learning and guidance tools within classrooms as well as at home. The guides will provide guided discussions, discussion questions, graphic organizers, and post-reading activities.

Personally, think that the biggest challenge will be creating an entertaining, age appropriate comic book that teenagers will actually want to read. Of course, a comic book of any kind might be more engaging than a dry pamphlet or informational website, but if kids find the material corny or unrelatable, then they'll probably toss it aside without another thought. However, if the stories are funny, topical, and inspiring, I can see this being a worthwhile endeavor.