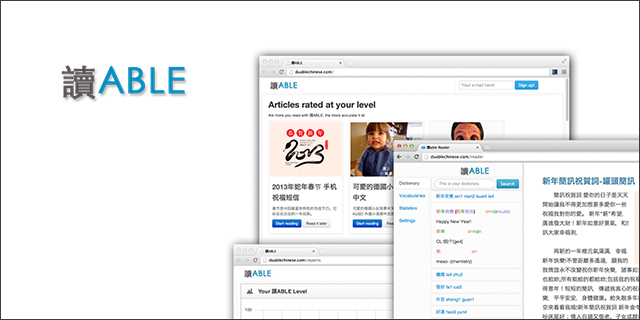 When you learn a Western language, reading is part and parcel of learning to speak. In fact, you might even be better at reading than speaking. But not so with Chinese.

“Learning to read and write Chinese is a massive amount of work compared to learning to speak just because there’s so many characters you have to memorize,” says Nik van der Ploeg.

So van der Ploeg decided to just avoid that massive amount of work and focus on speaking. The problem was, he couldn’t read menus and bus signs. And when he moved to Taiwan, he had to retake Chinese class twice because everyone else was ahead of him.

To help foreigners the world over avoid his fate, van der Ploeg and Victor Chen started Duable to teach Chinese reading. (“Duable” is a play on words: the name reads like “doable” in English, but the Chinese character 讀 [“du”] means “read.”)

Now part of the JFDI.Asia accelerator, Duable has a huge database of Chinese-language articles from around the web that are ranked by difficulty. Harder articles contain less common words. As you’re reading, you can look up words and see other snippets of text that use them. The site tracks which words you have trouble with and which you don't, so it knows exactly what article to give you next – one that’s slightly above your reading level.

The Duable philosophy is simple: learning should be enjoyable, and studying should be efficient. Van der Ploeg contrasts this with the traditional Chinese education, which he observed in China and Taiwan. To learn a new word, children write its Chinese character a hundred times over. He says that Chinese teachers believe you have to learn to write in order to learn to read – not recognizing that most “writing” is now done online, with the help of a keyboard and character suggestions.

This happens in his Chinese classes in Taiwan, too. “You learn Chinese the way Chinese people learn Chinese as children, which basically involves doing everything lots and lots of times . . . it’s kind of learning by rote,” explains van der Ploeg. “The textbooks, the way the lessons are laid out, and especially the way reading and writing is taught – it’s very mechanical and not really focused on the most efficient way to make it stick.”

Instead, Duable is using algorithms and personalization to speed up the learning process. Van der Ploeg wants people to feel the way he did when he read a special Chinese book that uses only 400 words (and, hence, is not frustratingly difficult).

He recalls, “I just picked it up and went through it, and that was the first time I had been able to read something without looking in the dictionary every two minutes. That feeling was just so awesome, so I want to recreate that.”

Duable will launch in public beta soon, and plans start as low as $8.99 per month.