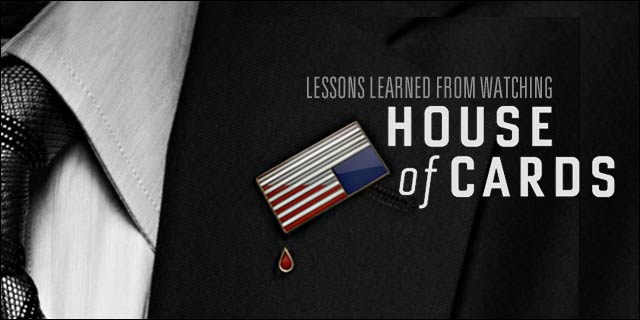 Building a company from a startup into a business is crazy hard work. I founded my startup Speek two years ago. We now have around $3 million in venture funding, 19 employees, and are post-revenue. One thing I’ve learned in Speek’s quest to fix crappy conference calls is that you must glean lessons from absolutely anywhere and everywhere; you never know where something useful might crop up.

Lately, I’ve started watching House of Cards on Netflix. In case you’re not aware, House of Cards is the viewership darling of Netflix's original programming. Netflix has 27 million subscribers in the U.S. and 33 million worldwide. An estimated 15 percent of all Netflix subscribers have streamed at least one episode of House of Cards. That means millions and millions of viewers.

In many ways, House of Cards is a disruptive startup in it’s own right. It has become a fly in the ointment for the stodgy old network television incumbents, and even some of the premium and not-quite-so-premium johnny-come-latelies on cable. The latest rubble-throwing rabble-rouser to the televisual status quo.

Being one of those rare Washington, DC natives—a true“1%er”—I did not have the typical reaction to the Machiavellian conniving of Francis Underwood, the show’s underhanded protagonist: “holy shit.” As a true Washingtonian, my reaction was more of a “no shit.” That being said, Sun Tzu himself could learn a thing or two from Kevin Spacey's congressman-turned-Vice President.

With this in mind, I present you my lessons learned from watching House of Cards Season 2:

As a local boy, this was not so much “breaking news” as “mother's milk.” You, however—young grasshopper—may have lived a life of ignorance and bliss far from the Potomac's sordid shores: an idyllic, rustic life sheltered happily from the maneuvering and power-brokering that seem to provide equal and even sustenance to the lush green foliage of Rock Creek Park and the crack-heads around Union Station both fat (skinny) and happy (high).

If House of Cards provides only one business lesson, it’s that politics suck. If I had my way, political maneuvering would be outlawed in a corporate context. Alas, this is human nature. Put a block of cheese at the end of a crazy-ass maze and some mousy motherfuckers will find a way to lie, cheat and steal their way to the tastiest chunk of smoked Gouda.

Anyone who’s had the displeasure of working in a stodgy old corporation has come across the stuffed-shirt elbows who have made a career of a) accomplishing absolutely nothing and b) spending 40+ hours per week trying to be the poor man’s Dick Cheney (maybe or maybe not minus the “hunting accidents”). True story: I once worked at The College Board. I have seen hundreds if not thousands of these types, and it ain’t pretty.

Political pro tip: The best way to win at politics in a business context is to simply avoid playing. The people who are good at it, looooooove it. If you don't love it, then you aren't good at it, and no matter how hard you try to sink to their level, you'll never be as good at it as them. Get your shit done and play on your own—higher—level.

The power of a strong number two.

I'm not referring to an upper decker or a sturdy bowel movement: I mean Underwood's Chief of Staff Stamper. Not that he doesn't also have a shitty job.

“You’re only as strong as your number two” should be a truism that we teach in elementary school, for both comedic and learning purposes. The certain sign of a strong leader is to surround herself with talent. In business, you are only as good as the talented personnel that you can convince to join the good fight. This one is really important: don’t shit the bed. Boom! (Last poop joke until I think another one is funny, I promise.)

Learn the Art of War.

Sun Tzu has nothing on Francis Underwood. Having said that, the China situation in Season 2 possibly would have seen the sagacious strategist sharting himself: the perfect storm of global superpowers colliding, language and cultural barriers, enough under-the-table political contributions to make Boehner pale, and the ever present threat of global nuclear annihilation. FML.

In business, as in politics, you must be versed in strategy, if only to understand when it’s being used against you. Reading Sun Tzu’s The Art of War is a great place to start. For the Cliff Notes version, simply watch House of Cards on repeat.