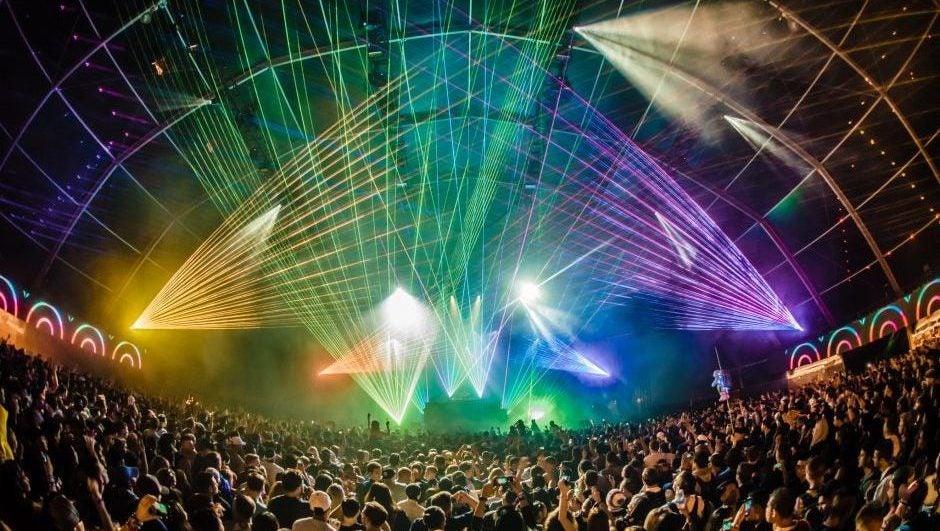 In the old days, it was normal for a music festival to, you know, just feature some bands, fresh air, and maybe a few food vendors. But today's festival landscape is competitive with organizers pushing the envelope. Whether it be with the shear size of the events, the number of acts, pyrotechnics, or beautiful art, these festivals have seriously stepped up their game. And while many festivals, like EDC, take over large motor speedways, fairgrounds or stadiums, others are taking a more unique approach.

For three days each September, the Life is Beautiful (LIB) festival takes over 18 city blocks of downtown Las Vegas (DTLV). No, we're not talking about the famous Las Vegas strip where all the behemoth hotels reside – we're talking about downtown, where Fremont Street and Las Vegas Boulevard collide in a mass of old school neon, casting a glow on dozens of empty lots and small businesses that have started to undergo a revitalization of their own over the past five years.

“Installing art in all the rooms and courtyard at The Art Motel for Life Is Beautiful was a natural for Meow Wolf,” said Drew Tulchin, CFO of Meow Wolf in an interview with TechCo. “The maximalist opportunity to bring dozens of visions into an immersive, interactive and exploratory experience for the awesome people of Las Vegas and their sensational, celebratory festival was an easy yes, especially with the generous support of Zappos.”

Yet still, there are plenty of empty lots and deserted motels waiting to be reinvented. Here, the sides of buildings become canvases for murals that not only provide colorful Instagram backdrops for festival goers, but it beautifies the once abandoned area for the betterment of the growing downtown community.

Bill Nye at Life is Beautiful: Science, Politics, and Saving The World

“The motel was in very bad shape and it rapidly became a palace of art and beauty, a true feast for the eyes and spirit. This is what artists do: turn blight in a community into what's right in a community,” said Tulchin. “Meow Wolf was founded on the ethos of artists working together to create greater community through art and love, to awaken all human beings to the extraordinary healing gifts that artists deliver to their communities every day—just like all other gifted and evolved professionals who make a living making a difference.”

Each year, LIB hosts musicians, artists, and attendees and create experiences and memories that last long after the last face painting has washed away.

“We hope people woke up their senses, interacted with each other, and left with a renewed and invigorated sense of the infinite power of imagination and the need to work together to form a more humane world,” said Tulchin.

Zappos, the online retailer based in downtown Las Vegas, sponsored the collective to transform an empty motel into The Art Motel in the center of the festival. Fully utilizing the rooms that enclosed a center courtyard, the activation featured 20 reimagined rooms full of colorful creations and over-the-top productions. Attendees could meander from room to room, discovering creations that ranged from whimsical to bizarre and even mildly creepy. The motel opened onto the Zappos Mood Swing activation, where guests could swing, shop, and express themselves in visual ways. 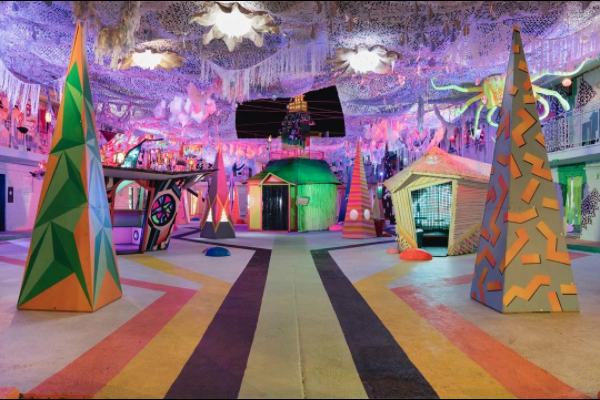 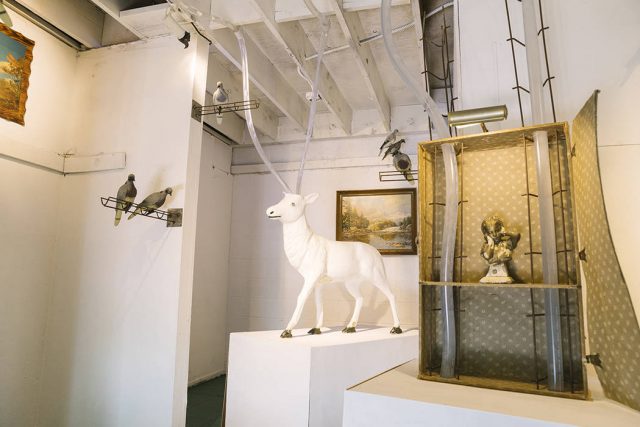 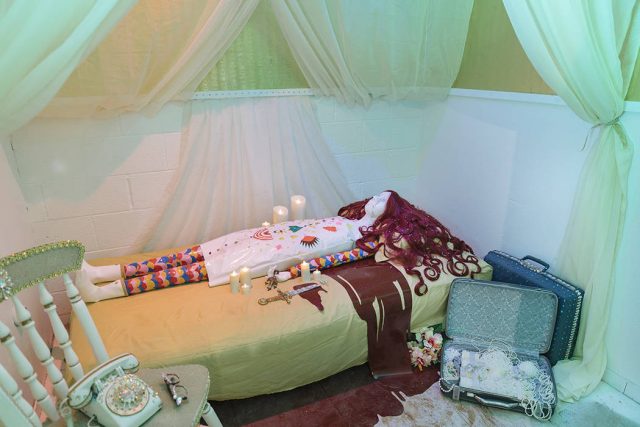 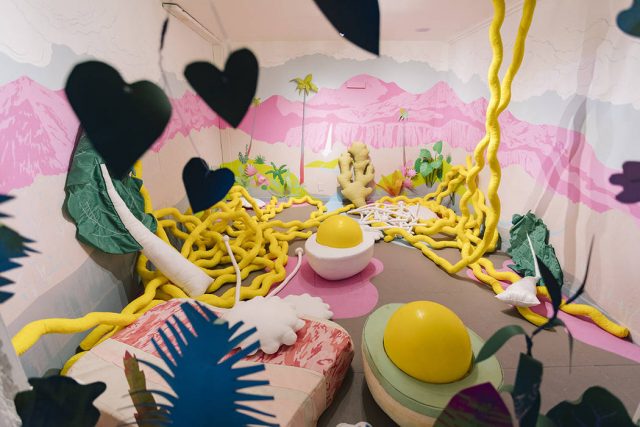 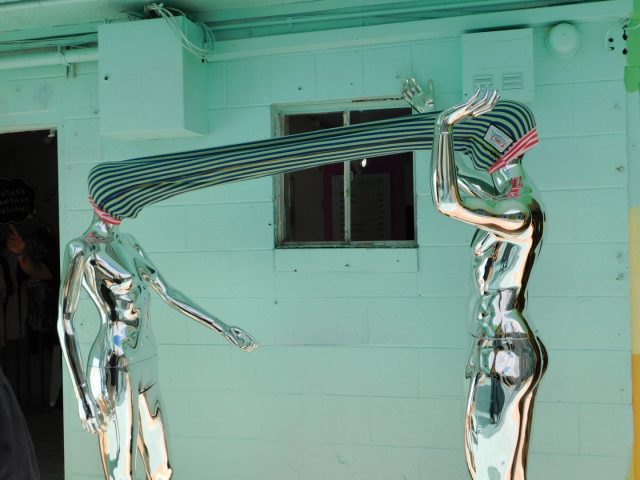 The 2016 LIB festival introduced a Felipe Pantone mural downtown that has been a staple for the local community. Rather than painting over it as they did with some other pieces, they had Yesco and Bombard Renewable Energy transform the mural, by adding neon lights powered by solar panels, making it “the world’s first, 100 percent solar-powered art mural” according to the festival. 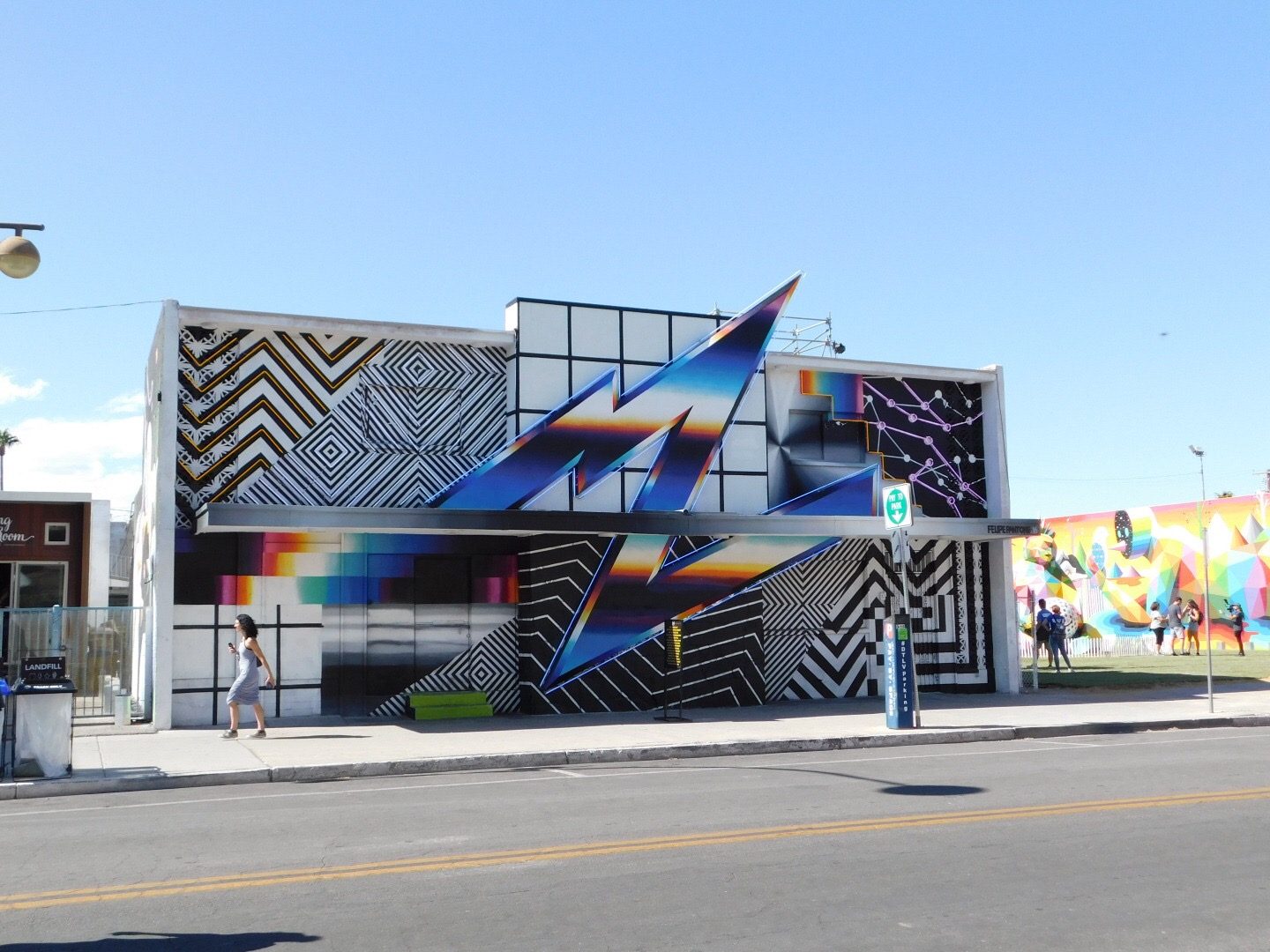 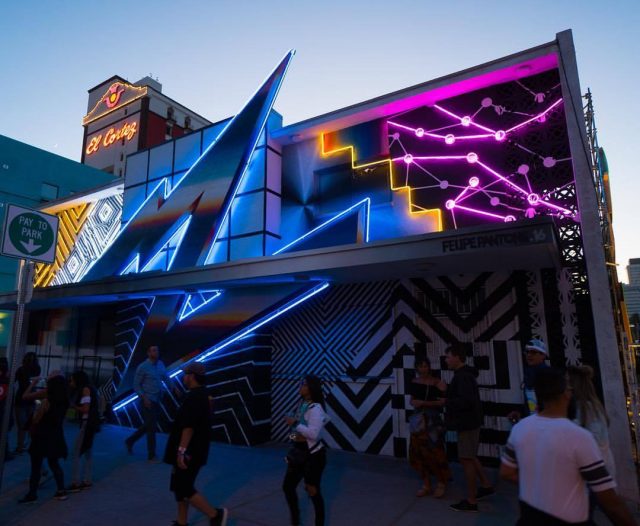 Ruling over the lawn just outside of Art Motel, the Okuda Bear and mural (painted on the side of the Art Motel) proved to be a fan favorite. Okuda is the name of the creator, Okuda San Miguel, a Spanish urban street artist. With the giant sculpture's geometric pattern mirroring that of the adjacent mural, the area was a hub of social attention and relaxation for revelers. Read an interview with the artist here. 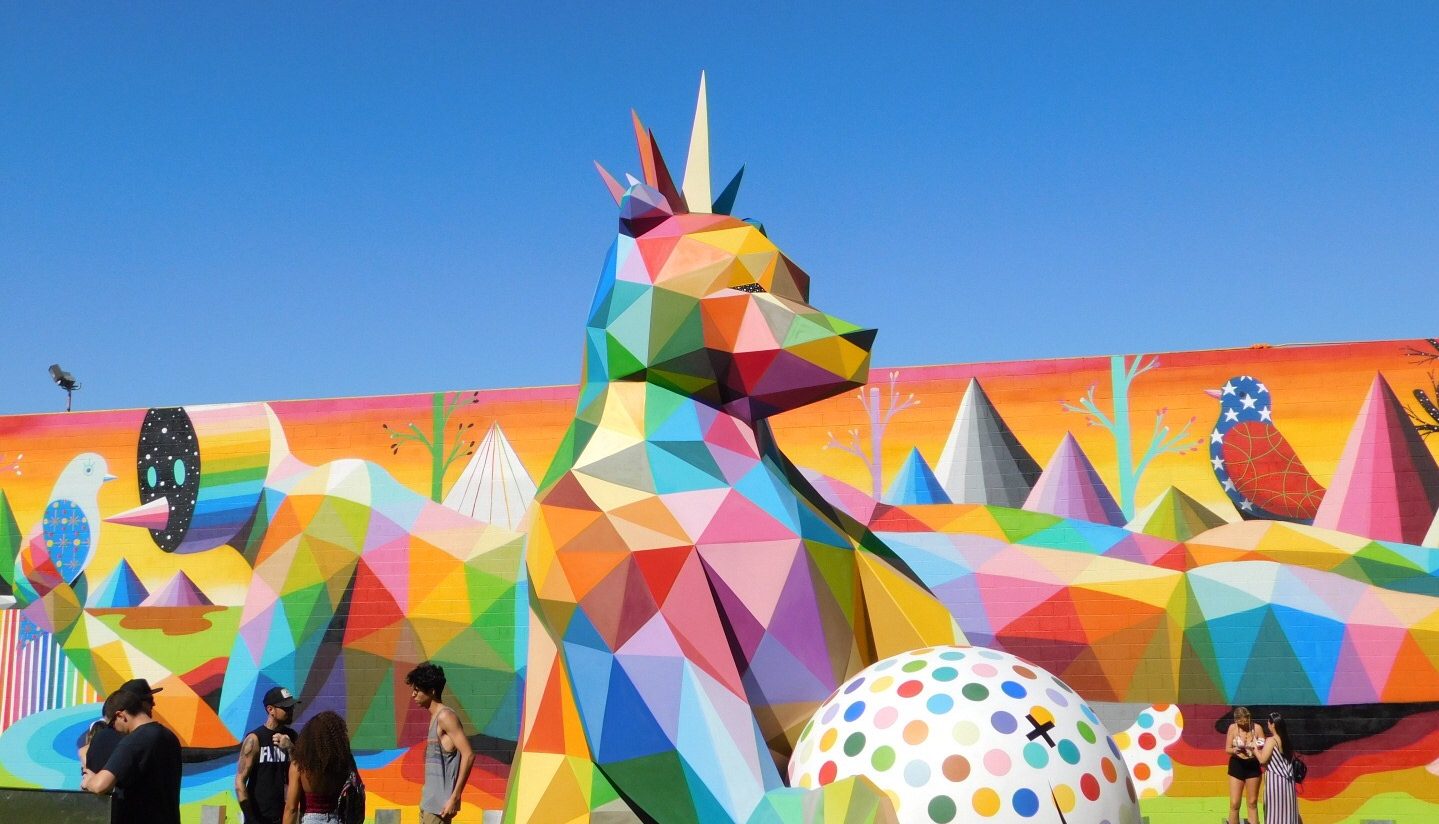 For the past year, adorning the front of the old Ferguson's Motel (soon to be a community and retail space) has been the Big Rig Jig – a transplant from the dusty desert setting of Burning Man. This year brought a new addition to the rig: draped behind it was a giant neon blanket with glittering LED lights that danced to a constantly changing soundtrack of relaxing music, providing an artistic escape for attendees seeking a silent moment to unwind. 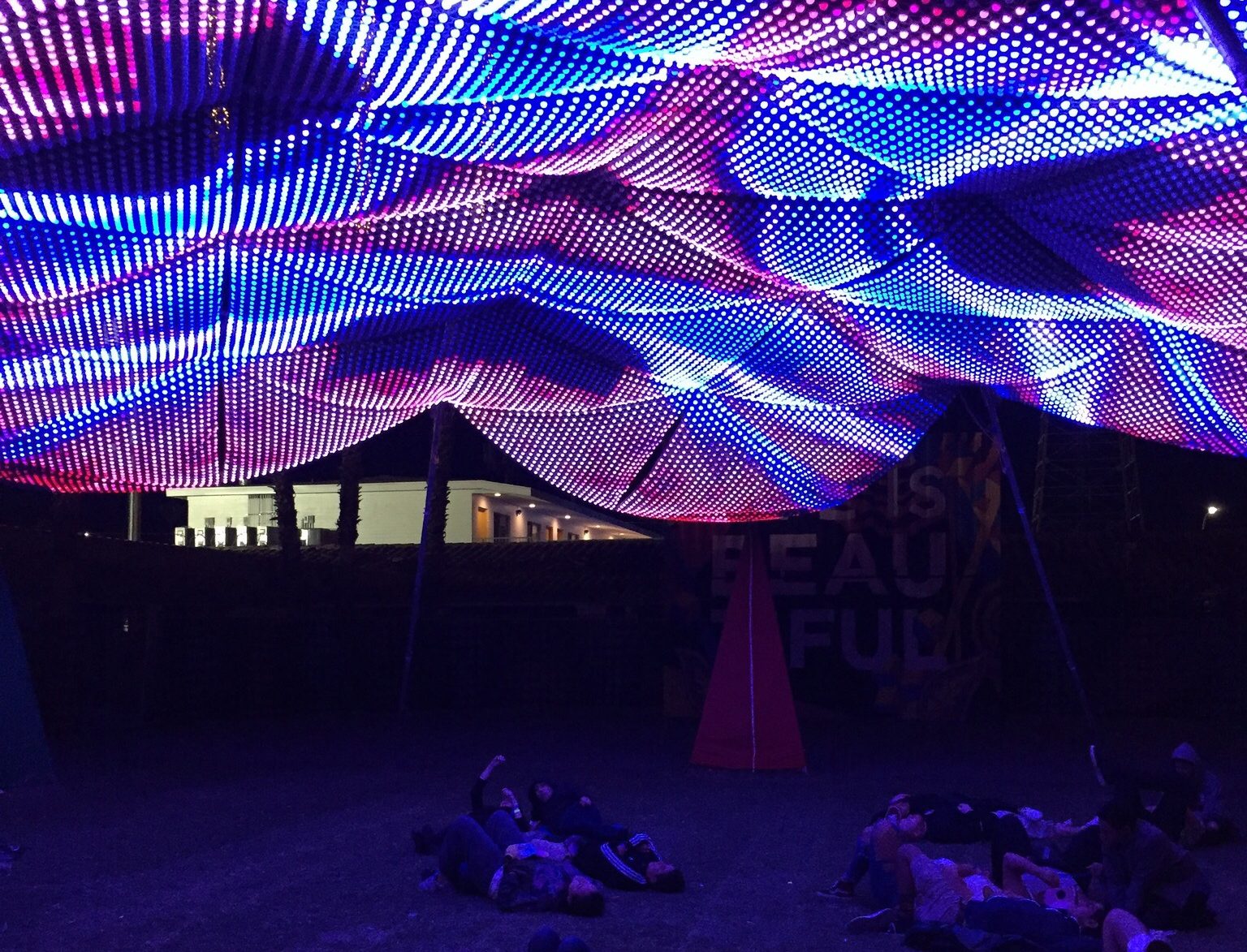 Read all our coverage of Life is Beautiful at TechCo