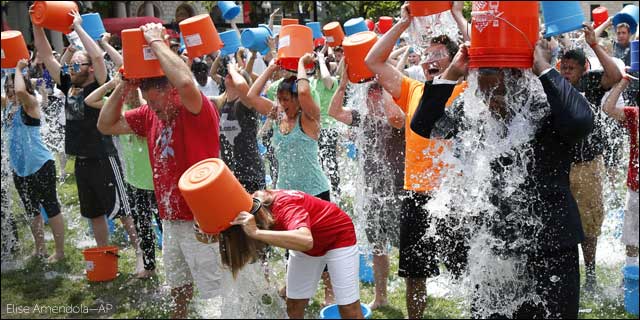 The ALS Ice Bucket Challenge is a great case study for the true potential of social media and viral marketing. No other phenomenon has ripped through the Internet quite so quickly and on such a personal level. The Harlem Shake might have seemed big at the time, but it turned out to be small potatoes by the time we were done dumping ice on each other. What lessons can we take and apply to our own marketing initiatives?

The Ice Bucket Challenge spread like something much more potent than wildfire. It spread like a meme. In an environment when almost everyone in the world has their social network attached to their hip at all times, videos showing the harmless public humiliation of your friends were bound to catch fire. Active social media users were sucked in immediately, and peer pressure reeled in the reluctant souls who normally use landscapes as profile pictures. Businesses like Empire Cat saw the opportunity to have some fun and give their customers a chuckle, but none of this would have been possible even ten years ago.

The Ice Bucket Challenge also managed to put “slacktivism” to good use. Posting a Facebook status about cancer doesn’t make you a part of the fight. In truth, neither does pouring a bucket of ice water on your head, but at least it requires more effort to support the cause than clicking a “Like” button does.

Keep the call to action simple

Getting people involved in the next great viral marketing campaign is as simple as dumping a bucket of ice on your head. I’m sorry, let me rephrase that: getting people involved in your next great viral marketing campaign needs to be as simple for them as dumping an ice bucket on their head. As much fun as I think it might be, I don’t believe that “write a song for MS” would catch on in quite the same way.

Add an element of obligation and a penalty for non-participation

The ice bucket challenge trapped everyone who was nominated. You want to participate because your friends are waiting to see your video, and you do not want to disappoint them. You also want to participate because you don’t necessarily want to part with $100, even if it is for a good cause. The real genius of the Ice Bucket Challenge was the inclusion of the $10 donation with participation. Getting wet didn’t get you off the hook, it just softened the blow, and it likely generated a donation out of individuals who otherwise would not have given anything.

Be ready to back it up

So you have a foolproof viral marketing campaign. Supplementing the attention with your standard brand-building strategies will deepen the impact of your campaign. The Ice Bucket Challenge might have done a fantastic job raising awareness of ALS, but have any of these videos actually taught you anything about ALS? The charities benefitting from this publicity have done a respectable job of following up with education on their cause. Getting your name out there is one thing. You have to take advantage of your time in the spotlight to let the world know what you are all about.

Get popular people on board

Of course, all of these factors are nice, but getting some famous people on board certainly can’t hurt, right? That’s the first rule of advertising, isn’t it?

It seems a bit too obvious to say we will never see another phenomenon quite like the ALS Ice Bucket Challenge. Trying to replicate that exact recipe for success is an exercise in futility. But buried in the details of this incredible marketing success story are some lessons that can be put to use building your brand.

Savannah Marie is a writer and business marketing enthusiast. She writes about tips and tricks in the world of business, online marketing, social media and start-ups. She is the editor of her blog, Mixios, which features content on business, social media, and everything in between.