Being an entrepreneur and a mom have a lot of similarities. The long hours, the hard work, and the whining coworkers all make for a considerably stressful life. Galvanize talked with entrepreneur Janine Williams, a mother of four and burgeoning startup founder that is looking to change the way hotels do business.

Janine Williams knew she was sitting on a goldmine. Technically, she was sitting at her dining room table, the center of operations for the two most important ventures in her life: motherhood and soon-to-be CEO.

Her four children under the age of ten pinballed in and out of the room, brimming with drama and full of questions: “Mom! Mom! Mom! Where’s the paper towels? Niko spilled a bowl of cereal in your bed.”

Williams paused the online team meeting she was trying to conduct for her fledgling startup company, Impulsify. She turned her attention to one of her daughters and the dog came bounding up to the table, barking like it was the end of the world.

“Janine, is everything okay? Should we reschedule?” one of her Skype’d-in colleagues called out from her laptop screen.

She reminded herself to breathe. And then the doorbell rang. The UPS guy was at the front door, adding to the already overflowing chaos of her home. Janine reached for the table, not quite white-knuckling it, but hanging on with what little strength she had left, quietly saying to herself, “Don’t fail…don’t fail…please don’t fail.”

“At first, I was just kind of the housewife who helped,” says Williams with a laugh.

At her husband’s request, she read through the business plan he drafted and wound up rewriting it, then had to create a logo and a website, and so on. Williams’ helper role scaled steadilys they got the company off the ground, all while raising their three young children. Then she realied their next opportunity for growth.

“I realized that we could get our clients product all day long, but they didn’t know what to do with it,” Williams recalls. “Hotel managers don’t know anything about retail; they’re hospitality people. So their stores looked bad. You’d have a gorgeous, multi-million dollar hotel lobby and then round the corner and there’s product boxes ripped open and thrown on a wire rack. It was awful.”

Williams wasn't the only one that realized this. The hotel employees she would inevitably work with felt exactly the same way.

“As an industry, we didn’t have the expertise to manage a retail operation, even a small and relatively simple one,” says Scott Youngblood, general manager of Embassy Suites Portland Washington Square. “The whole idea of treating your pantry outlet as valuable real estate that you need to maximize was wasted on the industry until a handful of pioneers like Janine began to help us make sense of it.”

Williams created a retail service component to her husband’s business, providing pricing and assortment recommendations along with visual merchandising know-how. She devoured whatever data she could get her hands on, from their internal supply and demand stats to convenience store analytics and consumer trends. She used it to give clients like Marriott incisive direction in shelving the perfect balance of salty snacks and sweet treats, along with healthy and trendy options.

“I went from being ‘the mom who helped’ to really growing the business as the VP of Sales and Marketing,” says Williams, whose tenacity and insight fueled the company’s surge from supplying 25 hotels to servicing 4,000 properties and landing a spot on Inc 500’s Fastest Growing Companies.

Business was booming and she and her husband welcomed a fourth child to their family. But then, divorce reared its ugly head.

Because Williams’ ex-husband was her CEO, and she had no stake in the company on paper, she walked away with nothing from the business they’d built together.

“I got the kids, which is far more important to me than a company I can rebuild,” she said. “But in many ways, giving up that business we’d grown together was like losing a child.”

Williams was down. But fortunately, she had an idea. While there’s no shortage of point of purchase software on the market, no one had designed a platform to meet the unique needs of unmanned hotel pantry operations. Hoteliers typically made do by trying to modify software designed for room reservations, golf course pro shops, or in Youngblood’s case at Embassy Suites, an interface built for the restaurant industry.

Williams, stubbornly inspired by the fact that her former husband/CEO “laughed at the notion that a blond English major from Florida State was going to build software,” set out to do just that. 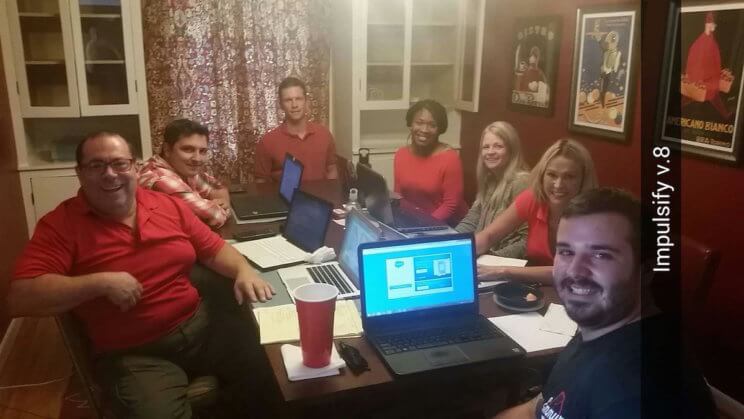 With $30,000 from her savings, Williams hired a CIO and a small contract development team to take her vision for ImpulsePoint from slide decks to a functioning interface.

Powered by machine learning, the ImpulsePoint system gets smarter with each transaction, making Williams’ clients smarter in the process. In less than a year after she and her team turned Youngblood’s relic of a gift shop into the thriving Cascadia Market, the value of his hotel increased by a million dollars.

“ImpulsePoint is one of, if not the, most successful innovation we’ve been able to deploy, not only at my hotel, but industry-wide,” said Youngblood.

Williams’ combination of game-changing software, retail services and never-before-captured data is doubling profits for hoteliers like Youngblood and edging her former company out when the two go head-to-head competing for business.

Back at the dining room table, Impulsify was taking off, but Williams felt isolated and, despite her success and resourcefulness, she was cracking under the challenges of keeping her startup afloat while single parenting four kids in what felt like a universe away from Denver’s thriving tech scene.

“Major clients were calling us ‘too small to scale,’ the kids were frustrated, and I was crumbling. Like, on the verge of giving up,” she says, her voice cracking at the memory. “It felt like everyone else was networking and doing amazing things and here I was, on my dining room table in Lakewood. I realized I needed to either take a risk and put a burst of new energy into our vision, or I needed to call it a day and go get a job.”

Then Williams found Galvanize. Last June, Williams took the plunge and became a member of Galvanize’s Platte campus in Denver, where she and the Impulsify team now work their magic in a glass-walled suite in the thick of the bustling tech-and-entrepreneurial community. Williams proudly refers to her new headquarters as “the Fishbowl.”

“It’s awesome to be in such a collaborative community,” she says. “Galvanize embodies the excitement and attitude of the whole Denver tech scene. People offer to share resources and help each other, just because they want to see you succeed, and they want to see Denver succeed.”

This brings us back to the goldmine Williams is sitting on: millions of potential dollars’ worth of data being collected by the ImpusePoint algorithms that can be packaged and sold to manufacturers and brands.

“I can tell them what the top 5 best-selling healthy snacks are in a Select Service hotel with 100 to 150 rooms in an urban area,” Williams says, citing one of a zillion ways her clients carve out a competitive edge using her exclusive analytics.

Williams has her eye on more than mere data domination, and making sure she gets her brood out the door and off to school by 6:40am every day. She’s raising a seed round of funding to expand Impulsify’s reach, and she’s determined to strike a better work-life balance than she did in her first tour through the startup minefield, where it was 22 hour days and not seeing enough of her kids.

“I won’t do that again,” she vows. “I’m trying to be the startup that succeeds without sacrificing my family.”

And she’s done it all on “a boot-strapped budget” while supporting four kids. She smiles as she glances out at Galvanize’s deck overlooking downtown Denver, where her 7-year old son is playing Corn Hole with a data science student while she crunches the numbers for her startup.

“It’s like we moved the dining room table here,” she chuckles. “We’ve still got kids and dogs running around. We just do it in the Fishbowl now.”