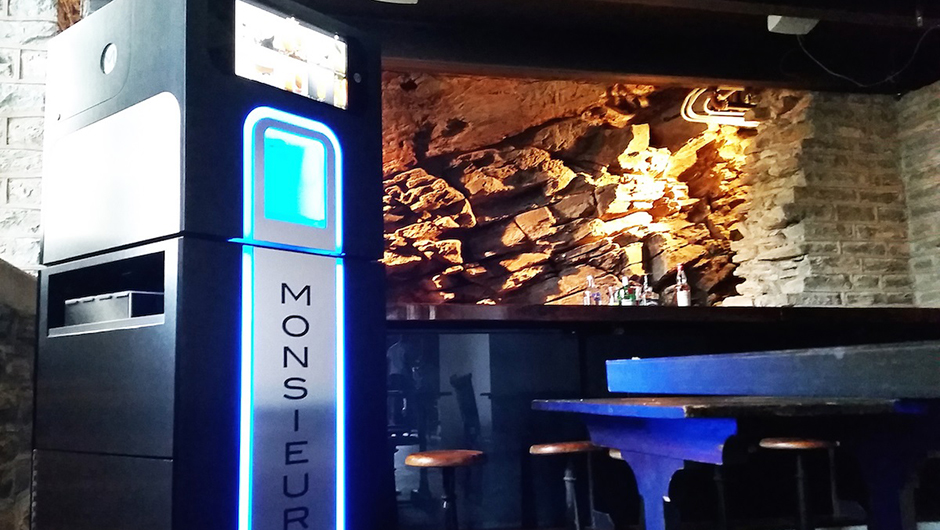 We here at Tech.Co love our cocktails. Therefore it is only apropos that I take the opportunity to introduce you to Monsieur.co, an automated, self service, bartending machine.

Founder Barry Givens hatched the idea for an automatic drink dispenser while waiting almost two hours for drinks at a college bar when he was a student at the Georgia Institute of Technology. Several years later after graduating college, entering the corporate world, then leaving the corporate world to pursue entrepreneurship full-time, he revisited the idea of a robotic bartender.

Givens and his co-founder (who's no longer with the company) eventually created a prototype that they named Monsieur. They officially launched on stage at TechCrunch Disrupt, Sept. 2013.

Monsieur's first funding came from entrepreneur, inventor, and angel investor Paul Judge who encountered the prototype at a party. This led to a $40,000 investment from Judge. This was soon followed by a successful Kickstarter campaign in which they raised $140,000 from almost 200 backers. Their most recent round of fundraising closed in late 2014 with a total of $2 million raised. This round was led by  Buckhead Investment Partners in Atlanta, GA.

Their bartending machines (available in personal or commercial sizes) is attempting to disrupt an industry that has been working the same way for a very long time. Also, the spirits industry in the United States is swimming with rules and regulations.

“Bringing innovative cocktail dispensing technology to the spirits industry is a challenge to the 3-tier system in the United States,” says Givens. “There are many rules and regulations that separate each vertical in the system. So our business model had to be developed around some of those restrictions. But, as we overcome these challenges, they become barriers to entry for any competitors.”

Monsieur recently deployed 10 machines at the Kentucky Derby where they were successful in pouring over 4,100 drinks with zero downtime. Givens considers this their biggest win so far. “As a young hardware company, that is truly satisfying to perform at such a high level on a global stage.”

It's not all about the alcohol

According to a recent interview with Entrepreneur magazine, Givens also spends time giving back to the community and molding future entrepreneurs. As part of the NextIN Line Network, he visits low income middle and high schools and talks to kids about careers in entrepreneurship and technology. He hopes his own success inspires kids to follow a similar path.