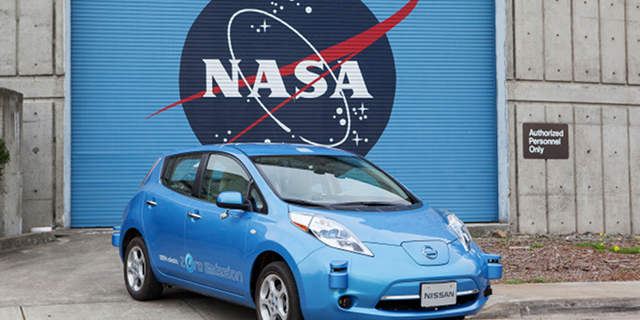 What can NASA learn from automaker Nissan? A lot, apparently. The two companies announced a five-year partnership where engineers from both companies will working together to develop the robo-cars for cities on Earth and other planets. Specifically, Mars.

The idea is to develop and test zero-emission autonomous vehicles. Nissan has already been testing cars that can navigate urban environments on their own. NASA has operated remotely operated vehicles millions of miles from Earth. They will join forces and start research from Silicon Valley.

“This is a perfect blend of the capability of what the robotics folks at NASA Ames have and the autonomy that we bring,” says Maarten Sierhuis, the director of Nissan’s Silicon Valley research center, who also spent ten years as a NASA senior scientist. He says that “the timing is right because we are ready to start testing” the ability to autonomously navigate city streets, which the automaker has pledged to offer with cars on the market by 2020, and NASA can help it do that.

Nissan has already hinted at plans  to make self-driving cars a cheap upgrade to their existing cars by 2020. As NASA says, they want to add autonomy to their space vehicles.

Seems like all eyes are on Mars now. Elon Musk, CEO of SpaceX and Tesla, has long been an advocate of setting up a Mars colony. Musk plans on sending an “average person” to Mars by 2026.

From the looks of it, we may be riding in an autonomous Nissan in Mars and not The Jetsons-like flying car we were all hoping for. Bummer.