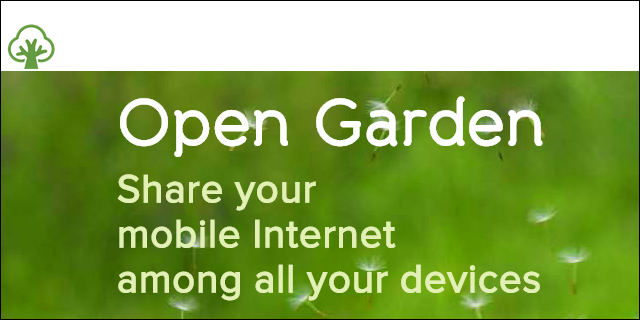 If you download any of the products coming out of this week’s LAUNCH Festival, Open Garden should be one of them.

Launching version 2.0, Open Garden is an application that can improve the speed and reliability of your Internet connection on a Mac, Android, or Windows device. It uses a mesh network, similar to peer-to-peer file sharing: everyone who uses the app on smartphones, tablets, and computers increases the power of the network and its Internet connection. The more people using it, the better the connection.

Open Garden can take advantage of wifi, 4G, and other connections. But it isn’t available yet for iPad, iPod, iPhone, or Linux.

The previous version of Open Garden was just a personal network that let you share connectivity among your own devices, like your phone and computer, and it picked up over 2.1 million users. But the San Francisco startup has implemented new technologies that allow the sharing to be among a whole community. For example, the “multi hop” function means that even if you have no Internet at all, your device can “hop” over nearby devices until it reaches one with Internet. This effectively extends the reach of any wifi network.

Open Garden is cofounded by Micha Benoliel, who developed key technologies for Skype; Stanislav Shalunov, who built a congestion control technology used on much of the Internet; and Greg Hazel, the former lead developer of uTorrent. In the future, they hope to work with phone manufacturers and wireless carriers to build the technology into their devices and networks. And their vision is much broader than just faster Internet for tech elites.

On a longer term vision, Open Garden is willing to enable a free wireless broadband Internet in rural zones to improve access to knowledge, education, and stimulate innovation and entrepreneurship.