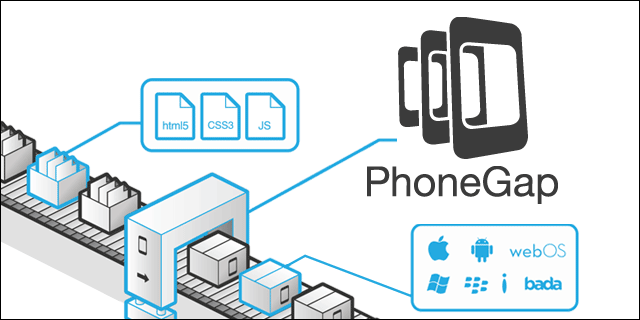 PhoneGap is a free and open source mobile development framework that allows for the creation of cross platform mobile apps easily by using standardized web technologies like HTML5, CSS3, and JavaScript. These hybrid mobile apps are then rolled out on the platforms of choice like iOS, Android, Windows Phone or Blackberry. It helps the developers to avoid the usage of native languages or languages specific to devices, thus having a scope for re-usability of efforts and speed of development. It wraps HTML, CSS and JavaScript code into native containers depending upon the platform of the device, extending the features of HTML and JavaScript to work with the device.

HTML5 now provides access to device-specific hardware and also embeds HTML5 code inside a native WebView on the device. This uses a foreign function interface to access the native resources of the device. Native plug-ins can be integrated through JavaScript with the HTML5 pages. Some basic plug-ins that are accessible through PhoneGap are Accelerometer, Camera, Compass, Microphone, and Speaker.

Some believe that PhoneGap is not as good as the native counterparts, but the convenience offered by PhoneGap is welcomed by most. Developers find that PhoneGap's benefits outweigh any detractors. Apps are developed once but can be used multiple times, which generates a reusable UI & design. Code is also reusable, and the speed of rollout increases since efforts are not duplicated.

Packaging mobile apps into the cloud for multiple platforms is possible with PhoneGap Build.  Upon uploading the HTML, CSS and Javascript to the cloud, PhoneGap renders app store-ready apps for iOS, Android and Windows Phone for quick, hassle free use.
PhoneGap Build is also part of Adobe’s Creative Cloud, a subscription-based service giving users access to a collection of software for graphic design, video editing, web development, photography, and Cloud services.

PhoneGap was rechristened Apache Cordova when it was donated to the Apache Software Foundation to remain free and open source with the Apache License. All in all, PhoneGap is an open source distribution of Cordova, creating confusion as both the names are generally used interchangeably.

As a sign of the times, smart developers put in rigorous efforts for Cross Platform Development using JavaScript and CSS3. Naturally, mobile developers looking to launch cross platform projects put PhoneGap Build at the helm of their strategy.