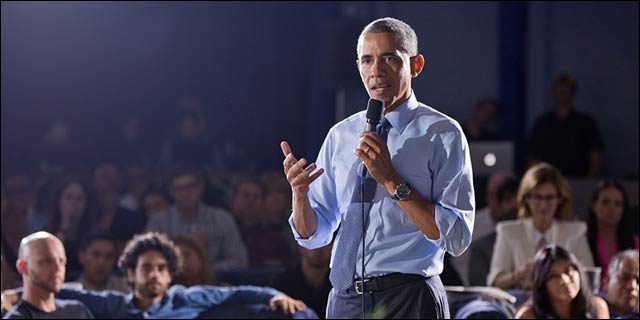 US President Barack Obama announced today his support for “free and open Internet” rules to ensure that no service is stuck in a “slow lane” without paying a fee. He urged the independent Federal Communications Commission (FCC) to “implement the strongest possible rules to protect net neutrality,” a principle that bars broadband providers from blocking or throttling certain services.

The Internet providers shouldn't be allowed to charge different companies more or less for their data or to slow down, or block, access to Web sites and services they don't like.

Obama’s comment comes amid an ongoing debate among online industry sectors as the FCC seeks to draft new rules to replace those struck down this year by a US appeals court, which said the agency lacked authority to regulate Internet service firms as it does telephone carriers.

“‘Net neutrality’ has been built into the fabric of the Internet since its creation — but it is also a principle that we cannot take for granted,” Obama said in a statement. “We cannot allow Internet service providers to restrict the best access or to pick winners and losers in the online marketplace for services and ideas.”

Verizon and its allies have argued that the FCC lacks authority to interfere with their business, and that Congress never decided these companies were regulated utilities or “common carriers.” They argue that companies like Netflix and even Skype clog our pipes with enormous amounts of data and that they provide free services on networks that they spent billions to build (free calls, free streaming, etc.).

This is an important issue because net neutrality protects innovation. If there is no way to keep big companies from paying more money for special treatments (in this case faster speed and more bandwidth) it means that smaller startups will be at a disadvantage. (Just because they cannot afford to pay extra, their sites will be slow).

“That kind of gatekeeping would undermine the level playing field essential to the Internet’s growth. So, as I have before, I am asking for an explicit ban on paid prioritization and any other restriction that has a similar effect,” said President Obama in the statement.

To accomplish this, Obama said the rules should reclassify consumer broadband service as a public utility — a move that has been fiercely opposed by the companies that would be affected.