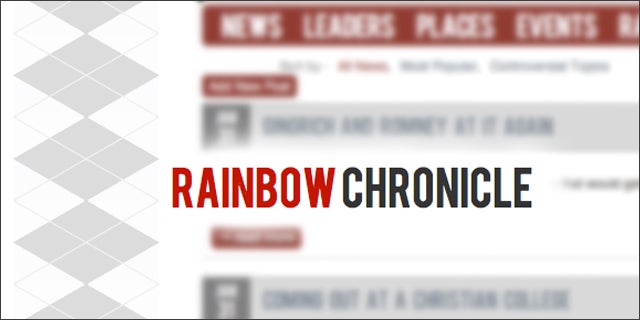 During one lunch hour in 2010, reporter Travis Lowry was listening to NPR and heard about the It Gets Better project, with inspirational videos encouraging LGBT youth to believe that life will improve. Lowry decided that rather than telling them it gets better in the future, he would help them get better now.

Launched this month, his site Rainbow Chronicle lets users input and rate organizations and individuals based on their LGBT-friendliness. It also features a heat map showing how friendly your community is and a blog with related news.

The site has many possible targets: a gay couple looking for a romantic restaurant, parents worried about their son’s new football coach, parishioners seeking an open-minded priest, a potential employee looking for same-sex partner benefits, or even voters deciding between politicians. (Obama is rated 3.2, but content is somewhat sparse: only 3 politicians are rated in DC, each with only 1 vote.)

To recruit more users and boost content, Rainbow Chronicle has several dozen interns across the country. They have reached out to more than a thousand LGBT university groups, garnering support from those at the University of Chicago, Haverford, and Carnegie Mellon. And in the future, they plan to partner with nonprofits, charities, and lobbying organizations within the LGBT community.

Lowry met cofounder Conor Clary as a freshman in high school in “evangelical” Texas. They are both straight, but have witnessed the difference between gay-friendly and gay-unfriendly communities. Lowry had gay roommates at the liberal Tufts University and was more aware of discrimination when he emerged into the “real world”:

“I got used to this bubble of being in Tufts and Cambridge and Massachusetts where there’s not a lot of homophobia; it’s relatively accepted. Once I left college, I was back in the real world, and it was kind of a slap in the face: you’re no longer in Tufts campus, homosexuality is not accepted in this country.”

“If you’re gonna have a free country like this, it needs to be everybody’s opinions that are respected,” adds Clary, who hasn’t witnessed discrimination outright but has seen the gay issue ignored in Texas.

I ask Rainbow Chronicle if there are any legal issues with rating public figures. Lowry appeals to freedom of speech, adding that some people might get annoyed if they are rated poorly:

“I think we’ll have a bigger problem with people who are acting in a homophobic manner being called homophobic; they’re going to be frustrated with that. But that’s – kind of not my problem.” Fair enough.