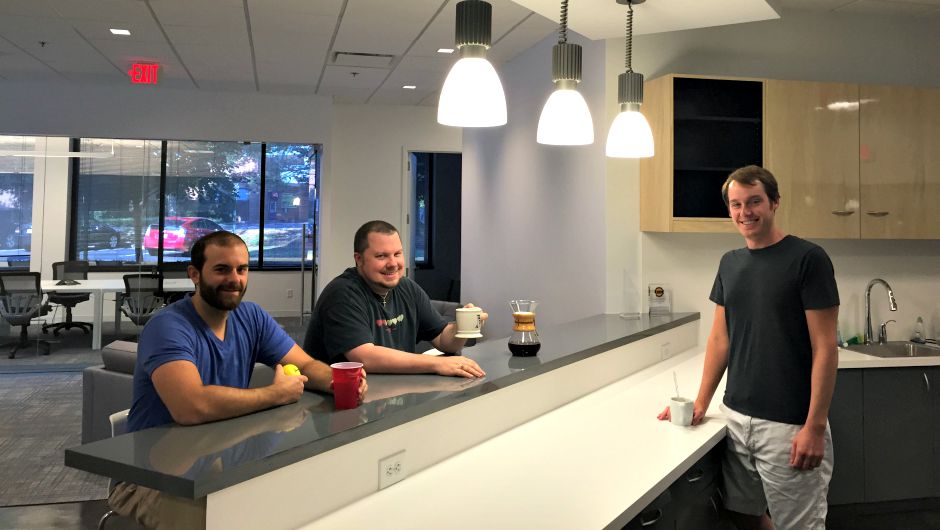 Walking through your typical tech startup you’re often met with a few common sightings: generic coffee machines everywhere, a lack of suits and ties, the occasional kegerator or bar, and a plethora of Apple products. For Reston, Virginia based Savvy Apps, they are going against the grain, and not just in the sense of a lack of reclaimed or driftwood based furniture.

According to founder Ken Yarmosh, Savvy Apps is not your typical dev shop. From their established guiding principles down to their candidate interview approach, their team is built around a culture of professionalism and quality. However, the biggest difference for this particular dev shop is that they focus specifically on mobile development, with a dash of marketing and branding.

When asked what motivated Yarmosh to found Savvy Apps, it quickly became evident that it’s simply due to his passion and interest in mobile. “It was created organically. It’s not like I was out to create the next great agency, I’m just a mobile guy, a mobile geek,” said Yarmosh. “When the iPhone came out, I got really excited about what that was all about. It started with web apps, then the SDK game out. Then people started pinging me for support, and it grew from there.”

Shortly thereafter he had larger projects and a need for a team to support his growing roster of clients. On their client roster should be some names you are familiar with such as PBS, the Cato Institute, and Homesnap.

Although Savvy Apps certainly isn’t the only dev shop that focuses on mobile, in the DC area they stand apart. “The market is saturated in some ways, others not,” said Yarmosh. “There is still a lot of opportunity out there, regardless of other people doing this. We get inspired by people who do great work, and locally there is not a major competitor. There are a couple of companies that do this, but focus on federal/government work, or they have purely off shore teams.”

Savvy Apps’ employees are primarily all housed in the Reston, Virginia area with some spread throughout the US, and the team consists of experienced professionals with varied background. The reasoning behind having local developers is to focus on quality, whereas offshore teams may be more cost-effective, but don’t often yield the same results. Debates aside, whether it’s Savvy Apps guiding principles, local team, or laser focused approach, their results show a pattern of success. Of the apps they have produced, 20 of them have been featured in the App Store.

Although the team is small and growing steadily, Yarmosh touched on why client fit is so important. After having initial conversations with Disney to build a mobile app, Savvy Apps decided against moving forward with the contract. On the other side of the spectrum, there are a lot of small businesses who want an app, but can’t yet commit to the costs involved. As a result, the team regularly coaches those who may not be able to afford their services, and has a library of educational content to point them in the right direction.

One of the primary reasons for offering coaching is that not every business needs an app. “They also sample what others are doing, and the known costs involved. There are examples such as Uber’s initial app development,” said Yarmosh. “$5,000 won’t cut it, and arguably they may not need it. A responsive site might be better. Some firms may say they can do it for $5-$10K, but the quality will be lacking.”

Prior to Savvy Apps in 2010, Yarmosh published a book with a familiar name, App Savvy. Although some aspects of the book are dated, around 70% of it are still applicable to those interested in learning how to market an app. It’s also where the team continues to draw processes and guidance for during their projects.

Internally, education is just as important for the team as it is for advising their clients. Each week the team has an hour dedicated to an area of responsibility where team members work on other projects in different verticals, and then debrief for another hour or so. Continuing education is also a core component tied into their culture, which can be noted from several of the Savvy Guiding Principles.

Culture and Being Savvy Enough for Savvy Apps

Down to the artisan coffee the team drinks, their professional culture percolates through everything they do. Yarmosh likened the culture to this by running a parallel to having specific ways to roast coffee beans, to the way it’s brewed (time and temperature). “There is a level of polish and care.” He also describes the team as very approachable, fun, and caring of each other.

These are the same qualities Yarmosh looks for in new team members, which the company does have several open positions seeking to be filled.

For those interested in building an app, Yarmosh has some final thoughts on how everyone should approach the matter. “Think about it as if you were starting a business, not just an app. Look at competitors, cost, and time. Focus on the basic business fundamentals associated with it, then the technical.”