For a long time, the business world has been defined by a two-word mantra that has rang true through every office in the country: money talks. The employees that make the most money do so because they are valued the most; it's that simple. However, what many employers may not realize is that salary size is no longer the most valuable asset they can provide to their employees. In fact, multiple studies have shown that work-life balance can do a lot to keep your workers happy at their jobs. Just don't tell that to the many companies relying on sign-on bonuses for employee retention.

According to a study from Paysa, sign-on bonuses don't necessarily have the loyalty-increasing effect most founders hope. With a little bit of data from some of the top tech companies in the world, it's easy to see that the highest sign-on bonus in no way guarantees a long tenure at the company, even when its innovating new technology every day. 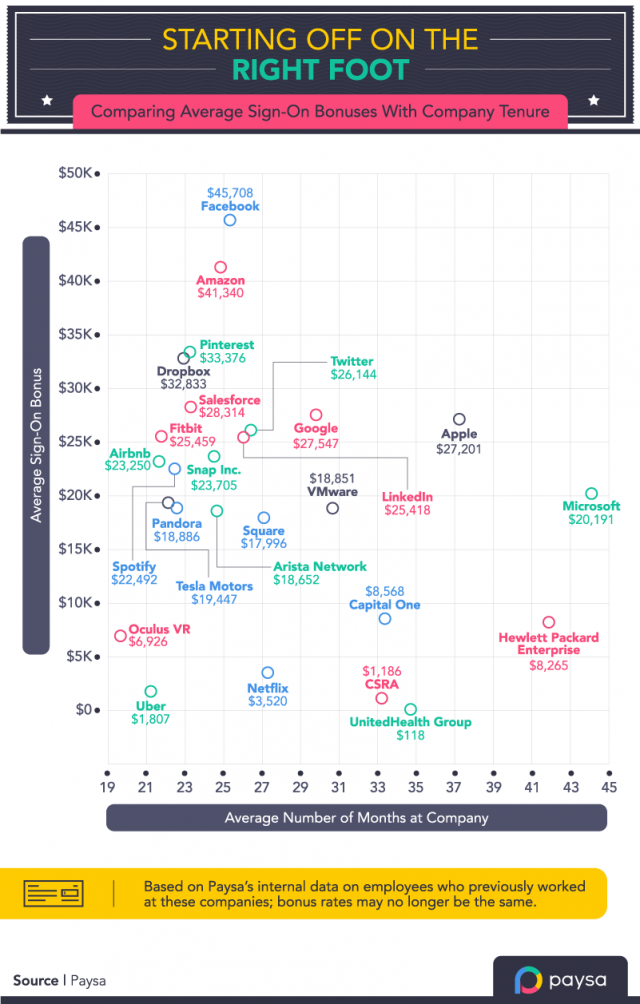 On a small scale, the effect of sign-on bonuses appears to be a positive one. Ignoring those outlier companies on the far right of the scale, it would appear retention rates increase at small increments as sign-on bonuses increase as well. The steady climb among tech giants like Airbnb, Fitbit, Dropbox, Pinterest and Amazon makes a notable case for the “more is more” argument when it comes to these bonuses.

“Signing bonuses are becoming more and more commonplace in recruiting technical jobs, wrote the authors of the study. “This could be a testament to the fact that employers across the board are experiencing challenges with retaining talented employees, so to counteract this issue, some companies are returning to sign-on bonuses.”

On the other hand, when considering the outliers, Facebook has the highest average sign-on bonus of $45,708 with an average retention rate of about 26 months. That, compared to Microsoft, who has an average sign-on bonus of $20,191 has a retention rate of 42 months, isn't very good. If you look at the bigger picture, it's fairly easy to see that those with the higher sign-on bonuses fall further to the left of the retention scale, showing that a higher bonus doesn't necessarily mean they'll be sticking around much longer. Even in the smaller picture, thousands of extra dollars in sign-on bonuses only translates to a few extra months at the company. Is that really worth it?

So what is the answer to the question posed in the headline? Tragically, there isn't one. The reality is that very few employees at this level are solely focused on the money. Things like company culture, work life balance, and contribution to a cause are proving to be the real drivers in the US workforce, leaving sign-on bonuses and salary raises in the dust. So if you really want to retain employees, stop throwing money at them and start treating them like human beings.