It's easy to make fun of Silicon Valley. It's fun to mock the ridiculous culture that has built up around what has become the startup world capital. The hit show Silicon Valley basically exists for that very reason.  I mean, the valley even has its own dictionary of terms.

As part of this satirical look at what he calls “a very important geographical location and historic innovation movement,” digital analyst, anthropologist, and futurist, Brian Solis has come up with a Silicon Valley Hierarchy of Needs. This one is considered v3.0, as Solis was inspired by and expanded upon on a similar hierarchy of needs that a friend of his posted on Facebook.

So what motivates those in Silicon Valley? Obviously, the most pervasive need is a branded T-shirt to establish your identity. How else is anyone to know what you founded or where you work without having to actually speak to you? Slightly less necessary, but still very important is free food. As we work our way up the hierarchy, you'll see that people are also motivated by the need to buy a Tesla, eventually quit their job to travel the world, and finally, to publish a blog post on Medium with life advice for others. 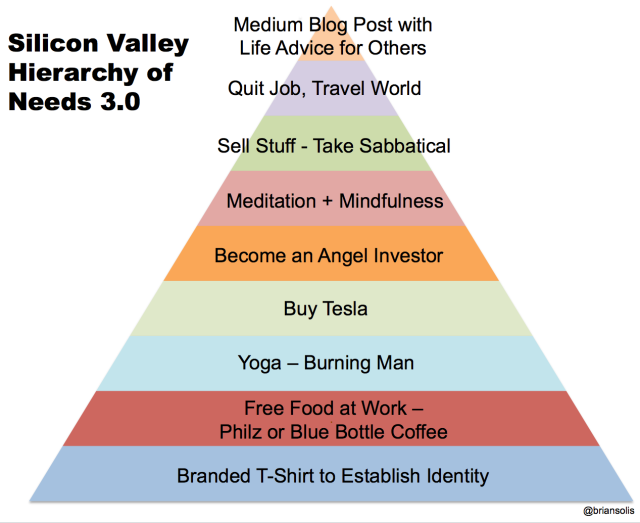 A little context for those who might be unaware. This hierarchy of needs is based off of Abraham Maslow’s Hierarchy of Needs, in which Maslow laid out the driving forces behind human motivation in a pyramid. While the one above was written as a joke, and the original, below, is pretty serious and straightforward, they can likely both be considered equally accurate.

Maslow's hierarchy of needs are as follows: 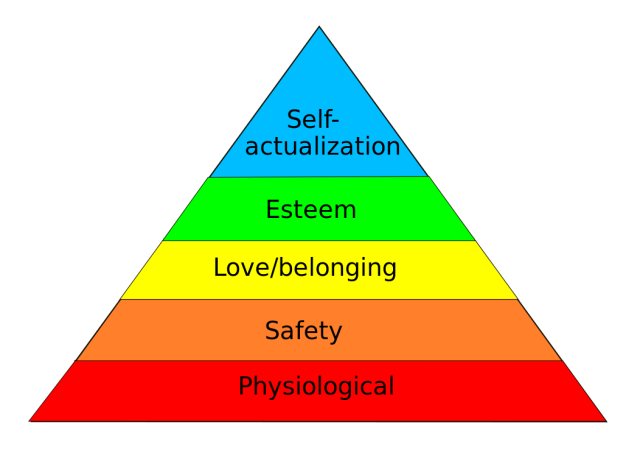 Be honest, which hierarchy of needs do you most relate to?