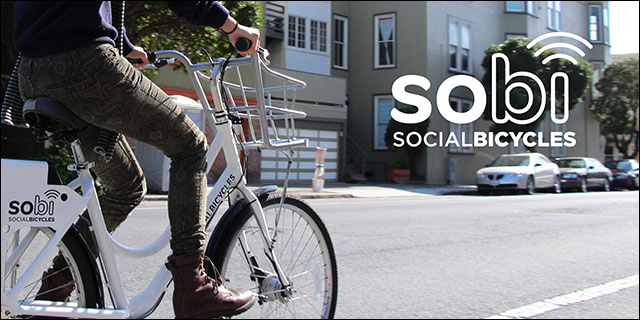 City bikeshare programs are ballooning across the country with a fairly simple concept – docked bikes that can be rented via credit card at the docking site or through an annual membership plan. Can this model be improved? Social Bicycles (SoBi) certainly thinks so.

Patrick Hoffman, product manager for New York-based SoBi, said the idea was to create a more flexible bikeshare that didn’t just get riders from A to B, but tracked their usage in order to connect with friends or create a better understanding about how other SoBi members are using the service.

SoBi’s bikes are designed so that they don’t necessarily have to be docked in a certain location. Rather, every bike is equipped with a GPS device so that users can pinpoint where it is – whether that’s outside of a coffee shop or in a designated SoBi corral location.

Users can also rent the bike for a set amount of time and do multiple errands in one rental, something not currently possible with D.C.’s Capital Bikeshare or New York’s Citi Bikes.

SoBi members who want to bank some money for their next trip can also volunteer to ride bikes from less used areas into city centers. So far, getting bikes back in place hasn’t been a problem, Hoffman said.

And with this GPS enabled “brain” on every bike, it also means SoBi is constantly collecting data on which user is traveling where, how long their trips are and, crucially, exactly which route they take. Current bikeshare programs collect data on where bikes are picked up and returned, but the data doesn’t show rider routes. This data is designed to be open source so riders can opt to share their information with other members and conduct their own analysis of how SoBi is used in their city. Hoffman emphasized that all personally identifiable information on data is carefully stored and that individuals can opt out of data sharing at anytime.

Hoffman brought one of the bikes to a Transportation Techies meetup on November 6. The bike itself is sleeker and looks more like a European commuter than a bikeshare model.  The brick-sized GPS unit sits just behind the saddle and includes a solar panel to recharge the unit’s battery, a nice eco-friendly touch. Hoffman also noted that the dockless design makes it possible to add modifications, such as a cargo option, which is not possible with front-docking shared bikes.

Currently, SoBi has bikes online in 13 cities, with plans to add an additional four in 2015.  Just like the bike itself, SoBi’s bike numbers are leaner, with as few as 20 bikes in Cadence, Nevada and as many as 750 bikes in Hamilton, Ontario. Compare that to more than 2,500 Capital Bikeshare bikes in D.C. and 6,000 Citi Bikes in New York City.

Start-up costs are also half as much as traditional bikeshare programs due to fewer infrastructure and human-resource requirements. Lower price points make this system possible in smaller cities such as Topeka, Kansas and Boise, Idaho.

SoBi will enter an established bikeshare market for the first time when 100 bikes sponsored by American Express are brought online in New York City later this year.